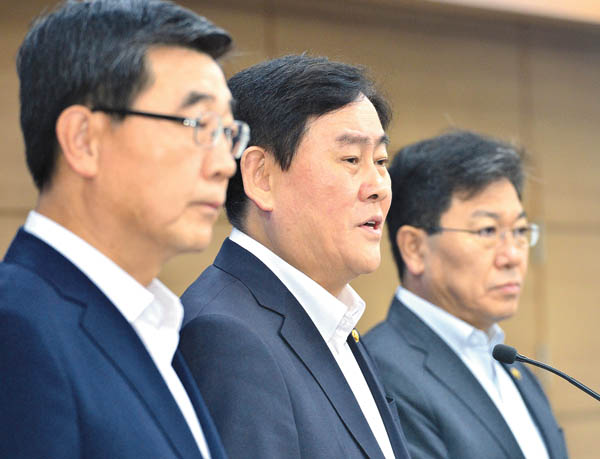 Finance Minister Choi Kyung-hwan, center, speaks about the direction of labor reforms that the government will carry out next month in Sejong City on Friday. [NEWSIS]

The government said Friday it will walk from negotiations on labor reforms and submit its own bills to the National Assembly starting next week if the talks do not reach a breakthrough.

The government’s ultimatum came after three-way negotiations among unions, companies and the government failed to reach an agreement Thursday night despite an announcement earlier in the day that significant progress had been made.

Even with such a promise, Deputy Prime Minister for the Economy Choi Kyung-hwan announced the government’s plan to push its own labor reform bill next week at an emergency press conference on Friday morning at Sejong Government Complex, jointly held with Labor Minister Lee and Minister of Trade, Industry and Energy Yoon Sang-jick.

“It was disappointing to see the trilateral talks pass the government-suggested deadline without reaching an agreement,” Choi said.

“[The government] can’t just sit and wait until the trilateral talks end as the National Assembly’s law processing and budget planning schedules are approaching.”

Starting next week, the government and ruling Saenuri Party begin work on revisions to five labor laws on which the tripartite committee already reached agreement: adjusting the Labor Standards Act to shorten maximum working hours and clarify standards of base pay; the Dispatched Worker Protection Act to allow more sectors to use dispatched workers and clarify the workers’ contracts; the Temporary Workers’ Act to extend the maximum employment of temporary workers; the Employment Insurance Act to expand the amount of severance paid and extend the period; and the Industrial Accident Insurance Act.

The government said it will deal with the two outstanding issues - the peak wage system and layoffs of underperforming employees - by writing its own guidelines.

“If the tripartite committee reaches agreement over this weekend [regarding the two issues], we will reflect the outcome in the government’s plan,” Choi said. “However, labor should be prepared to accept whatever layoff guidelines the government ends up.”

Saenuri Party lawmakers supported Choi’s decision to push ahead with the labor reforms, saying they were necessary and needed to be done for budgetary reasons too.

“We are planning to hold a government-ruling party meeting on Monday and general policy meeting of lawmakers on Wednesday and decide on the party platform for necessary legislative actions,” said Won Yoo-chul, the Saenuri floor leader, at a parliamentary audit session.

“We need a budget and we need to revise regulations for labor reform, especially to strengthen the social safety net.”

The government’s labor reforms may not pass the National Assembly easily due to lack of support from opposition parties. Opposition lawmakers in a parliamentary audit of the Labor Ministry stopped the audit session for hours, requesting an apology from the Labor Minister.

“The government and Saenuri’s announcement about labor reforms ignored the National Assembly,” said Rep. Kim Young-joo of the New Politics Alliance for Democracy.