Day care shrinks for some couples

Day care shrinks for some couples 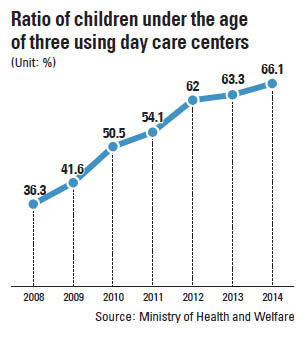 The Ministry of Health and Welfare announced Friday that two-parent households with an unemployed adult will be restricted from using the 12-hour free day care services for toddlers under the age of 3.

From July 2016, those families will be allowed to use only up to eight hours for free each day, the Health and Welfare Ministry said in a parliamentary audit session, plus 15 additional bonus hours per month.

Those who exceed the allotted hours will have to pay.

The relevant laws will be revised by the National Assembly, the first time since the national welfare project was launched in 2012.

The Health and Welfare Ministry said earlier this week that it would cut next year’s budget for day care for toddlers under the age of 3 from 2.96 trillion won ($2.49 billion) this year to 2.82 trillion won, down by approximately 5 percent. The deduction was mainly based on changes in welfare benefits aimed at that target group, as free day care classes lasting only six or eight hours per day will be opened.

The government is trying to keep households with a stay-at-home parent from relying on the free 12-hour programs. Health and Welfare Minister Moon Hyung-pyo told reporters in a meeting last month that authorities will work to disallow them from “unnecessarily using day care centers.” He added, “There’s no reason” for those families to use 12 hours of free day care.

The ministry claims that the changes stem from concerns over the growing supply of day care facilities around the country and their uneven quality.

Numerous cases of child abuse have made national headlines, so much so that the government made CCTVs mandatory in all day care centers.

The Nuri Program, which was a presidential campaign pledge by President Park Geun-hye, refers to a 2012-launched educational welfare project that aims to improve the overall development of young children.

Programs for kids under 3 years old are currently paid for by the Health and Welfare Ministry, while programs for 3- to 5-year-olds are funded jointly by the Ministry of Education and regional education offices.

Regional governments have long opposed the program and called on the central government to reduce their share.

Education authorities in Gangwon and North Jeolla stopped paying for the program in April saying they ran out of money.