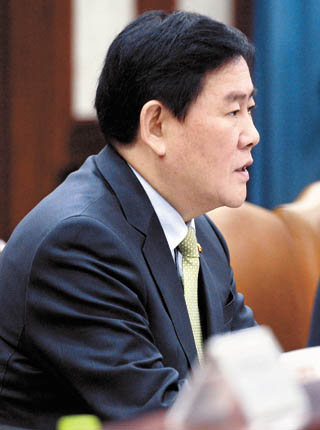 The Park Geun-hye administration’s budget plan for next year reflects the deepening dilemma of Finance Minister Choi Kyung-hwan, who finds himself stuck between two opposite goals: boosting the economy by spending more while also curbing the rising deficit.

Choi himself admitted the difficulty of the situation at a briefing on Monday. “The thing I considered the most was whether we should actively stimulate the economy by shouldering some debts, or whether we should focus on keeping fiscal soundness even if it would cause short-term difficulties,” he said. “I thought I couldn’t give up both values and sought a balance between the two.”

His predicament comes as the Park administration has suffered from fiscal deficits for three straight years, effectively since Park was inaugurated in 2013. 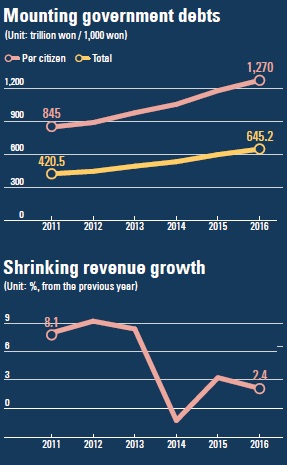 One of the biggest reasons for the fiscal deficit, officials say, is that the protracted slump in the Korean economy has led to less tax revenue.

The problems are myriad. Exports were at their worst level in six years in August. Inflation hasn’t climbed above 1 percent for nine straight months, and took a particularly hard hit after the outbreak of Middle East respiratory syndrome. The youth unemployment rate is hovering between 8 and 10 percent, and the de facto unemployment rate, which includes part-timers and those studying for jobs, is even higher, at above 11 percent. Unions are pushing ahead with strikes at the country’s core sectors like shipbuilding, in protest of the government’s plan to reform the labor market. The won is weakening against the greenback, and foreigners are fleeing the stock market amid anticipation of a U.S. rate hike. After the rout in China’s equity markets, many are fearful of emerging markets like Korea.

Ministry of Strategy and Finance officials admitted that next year’s budget plan is actually not that expansionary compared to 2015.

The plan for this year’s budget, which some economists in Seoul called the “super budget” because of its size, rose by 20 trillion won to 376 trillion won from 2014. The plan for 2016, on the other hand, inched up by half that - 11 trillion won - due to pessimism about Korea’s economic growth.

The 2.4-percent increase in total revenue for next year was also smaller than in the government’s long-term fiscal plan designed in 2014 for 2014-2019, when officials were confident in a 5.8 percent increase for 2016.

“The budget plan is ambiguous because it’s neither particularly expansionary nor tightening,” said a Finance Ministry official to the Korea JoongAng Daily. “We feel sandwiched between the two different demands, which are the reduction of the fiscal deficit while stimulating the economy through spending more.”

“You know, there is a limit for the influence that fiscal policy can have on the economy,” a high-ranking Finance Ministry official told reporters when asked if the budget plan was, in effect, a tightening policy. “Rather than boosting the economy through fiscal policy, we are trying to encourage the private sector to invest, which has more of an impact on the economy.”

However, the increase isn’t because the Welfare Ministry has launched more ambitious social welfare programs - it’s because Koreans are getting older. About 1.9 trillion won, or 93.7 percent of the increase, will be spent to support an increasing number of people claiming their public pensions.

“The main reason for the increase in our budget is because we have more beneficiaries,” said a Welfare Ministry official, by phone. “We will have to pay public pensions to those aged 61 or more until 2033, when the minimum age for beneficiaries is extended to 65.”

Among the public pensions, the newly launched “basic pension program” for the elderly is also costly.

The program was President Park’s key pledge to support citizens older than 65 in the bottom 70-percent income bracket, which gives them 200,000 won each month starting last July. About 280 billion won will be spent for the program, bringing the total pension spending to 7.86 trillion won next year. 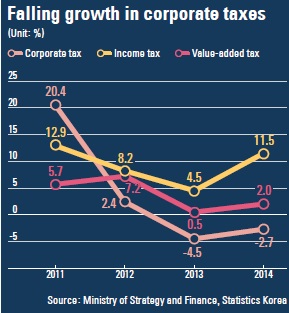 Childcare services will also have a bigger budget this year, after President Park pledged to provide free childcare up to age 5.

In particular, the budget for hiring additional assistant teachers for local childcare centers will be raised to 55.7 billion won, following the release of CCTV footage showing a teacher slapping a child that shocked the country and shed light on the poor working conditions of teachers.

Tax specialists agree that the mounting fiscal deficit indicates that the president’s ambitious plan for stronger welfare programs without raising taxes has failed.

“In her initial budget plan for welfare programs in 2013, Park promised to allocate about 135 trillion won in revenue for her welfare programs,” said Kim Wu-chul, an economics professor at the University of Seoul, at a forum held by the Center for Free Enterprise in Seoul on Wednesday. “But the fact that the cumulative deficit of the Park administration has mounted to 150 trillion won means she ultimately put the government into debt to support her ‘welfare without a tax raise’ [by issuing government bonds].”

“A primary reason for the fiscal deficit started under the Park administration is her expansion of welfare programs,” said Song Heon-jae, also an economics professor at the University of Seoul, at the forum. “There is consensus among analysts that her welfare policy without a tax raise had effectively failed.”


Calls for a tax hike

Under next year’s budget plan, the country’s debt-to-GDP ratio will surpass 40 percent for the first time in its history. This has spurred calls for a tax hike, particularly on the corporate tax rate that has remained at a low level since the Lee Myung-bak administration.

In 2008, the Lee administration, struggling from the global financial crisis, cut the maximum corporate tax rate to 22 percent from 25 percent, which has been left unchanged.

Opposition politicians claim the cut has done little to boost the economy, instead benefitting only a small group of conglomerates and chaebol while leading to next year’s historically high debt-to-GDP ratio.

“Our party would never accept the budget plan without normalizing the corporate tax rate,” said Moon Jae-in, the chairman of the opposition New Politics Alliance for Democracy, at a party meeting on Wednesday. “The Park Geun-hye government has not arranged any comprehensive measures to make up for the deficit in tax revenue.”

Data from the Korea Institute of Public Finance showed the “effective corporate tax rate,” which excludes various tax benefits from the government on private corporations, was lower on conglomerates than medium-sized companies.

Based on tax revenue in 2010, the average effective corporate rate on conglomerates with annual sales exceeding 500 billion won was 17.4 percent, the institute said in a report released in February.

It was 1.4 percent lower than the rate on companies with sales between 100 billion won and 500 billion won, which paid an average of 18.8 percent in corporate taxes.

The latest statistics from the National Assembly Budget Office show the effective corporate tax has been gradually cut to 14.7 percent in 2013 from 17.4 percent in 2009.

A total of 4,752 foreign firms based in Korea that earned more than 1 trillion won in 2013 didn’t pay a single won in corporate taxes for the year, according to data from National Tax Service that was released by Rep. Lee Man-woo, from the Saenuri Party, on Thursday.

As a result, the average ratio of tax collection to GDP, including social security revenue like public pensions, fell to around 24 percent, well below the OECD average of 34 percent in 2013.

In response to the rising demand for a raise in tax revenue, the Finance Ministry issued a report for “long-term taxation policy” on Friday, but there was no breakthrough raise in current taxes or plans to levy new taxes.

“There will be no corporate tax increase until the opposition party wins the next presidential election,” a Finance Ministry official in charge of taxation told the Korea JoongAng Daily.

Tax specialists are divided over the corporate tax increase called for by the opposition party.

“Considering other developed countries, such as Japan or the European Union, whose corporate taxes reach nearly 26 percent, we still have more room to raise the corporate tax from the current level of 22 percent,” said Ahn Chang-nam, a taxation science studies professor at Kangnam University, in a radio interview in August.

“As the latest change in year-end taxation policy effectively raised the income taxes on individuals, I think the only thing left for us to be raised is corporate tax.”

Hong Ki-yong, a business administration studies professor at the Incheon National University, disagrees, arguing that a raise in corporate tax would result in shrinking investment and sales for companies.

“Even if the government raises the corporate tax, it would not lead to an increase in tax revenue under the depressed economy, because companies would not earn much profit,” Hong said by phone.

“While their profits are not increasing but the tax is raised, the business condition will deteriorate for them.”