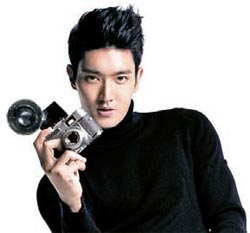 Singer-actor Choi Si-won from the boy group Super Junior expressed regret on Saturday for the recent controversy he caused involving his retweet of a post by Rev. John Piper arguing against the legalization of same-sex marriage.

“I apologize for my inconsiderate choice to retweet Rev. Piper’s tweet,” he wrote on his Twitter account in English, continuing, “The reason I echoed Rev. Piper’s thoughts was because I wished to voice a plurality of opinions.

“However, now I realize that my comments were hurtful to those whom I hold dearest : my fans, and their friends and families.”

Choi retweeted Piper’s post on Friday that stated that “so-called same-sex marriage does not exist.”

The 28-year-old singer will soon return to the tube through a new drama series, “She Was Pretty,” which will air its first episode on Wednesday.