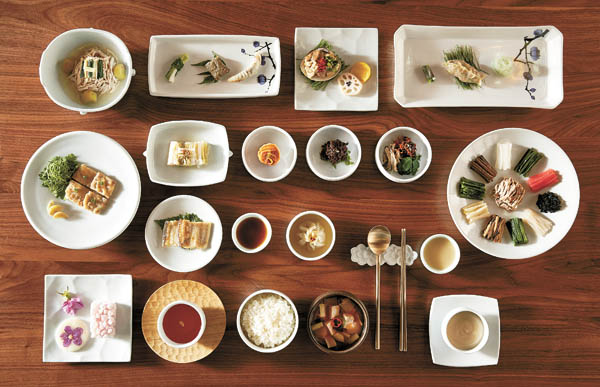 The Korea House in Jung District, central Seoul, offers a course menu cooked according to “Eumsik Dimibang,” the 17th-century cookbook. “Eumsik Dimibang” is the oldest cookbook written by a woman in Hangul, the Korean writing system, known to exist today. Provided by the Cultural Heritage Foundation

TV cooking shows, better known in Korea by the abbreviated word Cookbang, are all the rage across the country.

And many are reading more into this phenomenon as the shows largely feature male chefs. In Korea, a conservative country with many values derived from Confucianism, cooking has generally been a woman’s job.

In fact, what’s believed to be the first-ever cookbook written in Hangul, the Korean writing system, was written by a woman.

“Eumsik Dimibang” (also spelled “Eumsikdimibang”) was written by Lady Jang Gye-hyang (1598-1680) in the 1670s and includes ways to cook, ferment and store about 146 dishes. The title roughly translates to “Understanding the Taste of Food.”

Since April, the Korea House restaurant in Jung District, central Seoul, has been offering a course menu based on this 340-year-old cookbook. Since May, “Eumsik Dimibang” has also become available online through the Google Cultural Institute.

The Korea Tourism Organization, as well as local governments, has also been using the cookbook to promote tours and other cultural programs.

However, “Eumsik Dimibang,” which offers a rare glimpse into the cooking and dining culture of the noble families during the Joseon Dynasty (1392-1910), has not officially been designated a national cultural heritage item. The Korea JoongAng Daily has examined why, as well as exploring the book’s relevance to society today.

Yun Hee-jeong, a publicist at the Korea Cultural Heritage Foundation, said that the foundation decided to launch a course menu based on “Eumsik Dimibang” at the Korea House as similar attempts in the past received rave reviews.

For instance, at the 7th World Water Forum held in the southeastern cities of Daegu and Gyeongju, North Gyeongsang, in April, a descendant of Lady Jang prepared a luncheon for seven leaders and two officials based on “Eumsik Dimibang”.

In addition, the foundation presented dishes from “Eumsik Dimibang” to foreign dignitaries in March. These events convinced the foundation, which operates the Korea House, to create a course menu based on the book.

Park Ji-yeong, a marketing official at the Korea House, said that reviews so far have been positive. She added, though, that with the feedback they received over the past four months, they tweaked the original menu a little.

What’s unique about the old recipes, according to Park, is that they don’t use red peppers or red pepper powder as much as Koreans do today, and mostly cook with steam for a light and clean taste.

Food critics in Korea also note that noble cuisine from the Joseon Dynasty, as seen in the recipes from “Eumsik Dimibang,” generally sought to accentuate the original nutritional value and taste of foods rather than altering the flavor with seasoning and condiments. 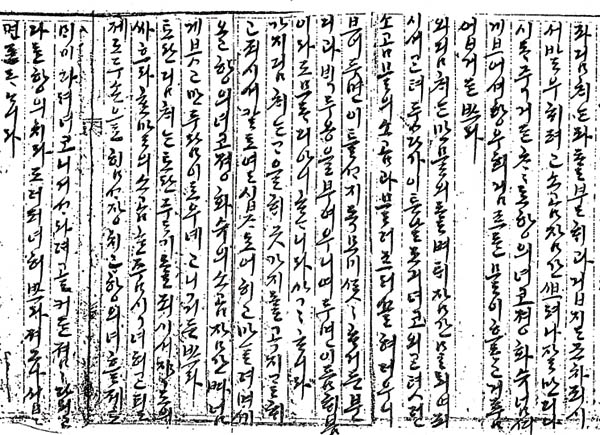 This 17th-century cookbook was also written by a woman in Hangul, but the exact date is unknown. Provided by the World Institute of Kimchi

“Because the food is based on recipes from the Gyeongsang region, I was concerned that it might be a little salty and spicy,” Kwon Mi-jin, one of the food bloggers who tried the menu said. “But they weren’t like that at all. They were all very mild and clean.”

In fact, another cookbook written in Hangul by a woman - and may be even older than “Eumsik Dimibang” - also indicates that Korean food was characterized by different flavors in the 1600s, and the use of red peppers wasn’t common.

The book, written by Lady Choi (1591-1660) of the Haeju Choi clan, includes recipes for about 20 dishes, including eggplant kimchi. While kimchi is usually made with fermented cabbage, the book’s version of kimchi is instead made with eggplant. Interestingly, cockscomb is added to bring out the color.

Lady Choi’s first name is unknown, as is often the case of Joseon-era women. They were known by their last names and the region they came from.

Food critics say based on this eggplant kimchi colored with cockscomb, it appears that color and presentation were just as important to ancient Koreans as taste and nutrition.

Park Chae-lin of the World Institute of Kimchi told the Korea JoongAng Daily that she came across the book by Lady Choi while browsing through the collection at the Sookmyung Women’s University Museum. She introduced it in a dissertation in April.

“Eumsik Dimibang” has often been utilized for cultural programs at home and abroad.

“Eumsik Dimibang,” top, has yet to be designated as a national treasure. Lady Jang Gye-hyang, above, also left many paintings, poetry and embroidery works, besides the cookbook. Provided by the Cultural Heritage Foundation

Since May, the book has been available through the Google Cultural Institute as Google expanded partnerships with more Korean cultural institutions. People can read about the cookbook in English and enjoy videos about it in English, Korean, Japanese and Chinese.

The Korea Tourism Organization in June offered about 30 influential bloggers in Korea and abroad a tour of various historical sites in Yeongyang County, North Gyeongsang, that are related to the cookbook, Lady Jang and her household.

Yeongyang County has also been active in promoting the book.

Besides curating the content for the Google Cultural Institute, the local government since this summer has been working with retail giant Homeplus to offer culinary courses based on the cookbook and giving out certificates of expertise. A total of 50 people completed the three-month program at the end of August.

However, despite “Eumsik Dimibang” being a definitive tome on Joseon-era noble cuisine, there has been little discussion on designating the book a national cultural heritage item.

This is primarily due to the complex ownership issues surrounding the book.

“We don’t have any record of the book’s owner filing a request to register it as a national cultural heritage item,” Kim Eun-yeong of the Cultural Heritage Administration’s tangible cultural property department told the Korea JoongAng Daily. “When it comes to designating an artifact as a cultural property, the move has to be initiated by the owner. If not, there is nothing we can do about it”

Officials at the North Gyeongsang Provincial Government said that the book’s owner, Jang’s descendants, previously donated the book to the permanent collection of the Kyungpook National University library. Due mainly to miscommunication in the past, the two parties are both currently claiming ownership of the relic.

“There weren’t any attempts so far to register the book as a cultural property because of this complex ownership issue,” Kwon Gyeong-su of the provincial government’s cultural heritage department said.

Nonetheless, provincial government officials say they are planning to register the book on Unesco’s Memory of the World list next year, as they believe the ownership issue won’t be a problem for that registration process.