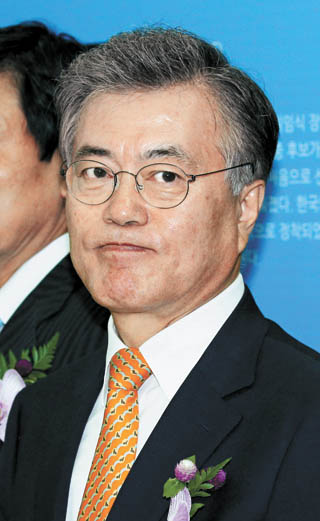 Opposition party leader Moon Jae-in and his fellow party lawmakers agreed to convene the party’s central committee on Wednesday as scheduled, during which Moon’s political fate will be decided depending on the committee’s decision about reforming the party nomination system.

Moon, chairman of the New Politics Alliance for Democracy (NPAD), also decided on Saturday to postpone a vote of confidence that was initially scheduled to take place in the form of a four-day poll beginning Sunday.

With the agreement, Moon’s political fate will be decided on Wednesday, as the NPAD’s central committee members will cast a vote on nomination proposals that will dramatically change the way the party picks candidates for the general elections next April.

Moon declared last Wednesday that he would step down if the party’s central committee votes down a set of nomination proposals drawn up by the party’s reform committee.

Moon’s unexpected move to stake his position on the outcome of the central committee meeting is seen as a last-ditch effort to put the brakes on escalating internal strife that has characterized the party. Lawmakers outside of the pro-Roh Moo-hyun faction led by Moon have not been shy in criticizing the nomination proposals and demanding Moon relinquish much of his authority in managing party affairs.

Under the nomination overhaul proposals drawn up by the reform committee, the NPAD would introduce a public panel of 300 to 1,000 people for each constituency to select an NPAD candidate. It would create the panels in advance, taking applications from the public. The reform committee also suggested giving extra points to political rookies, women and disabled people.

The reforms are widely seen as favoring aspiring politicians, at the same time putting party veterans at a disadvantage. Most of the main opposition’s seasoned veterans have not been shy about slamming Moon’s leadership.

Moon’s gambling of his political career in an effort to change the nomination system is seen as reflecting his judgment that he cannot run the party in its current form, stricken by internal strife. With the central committee meeting reaffirmed to take place on Wednesday, attention has turned to the likelihood that the central committee will approve the measures opposed by non-mainstream party lawmakers.

In order to pass the measures, at least half of the 576 members must attend the vote. They also need
a majority of attending members to approve them for passage. It is widely forecast that the 576-member committee will approve the measures as the majority of them are considered in favor of Moon. But the measures could be voted down if Moon’s critics manage to bring a large number of their members to the meeting.

To increase their chances of voting down the measures, lawmakers critical of Moon are expected to call for a secret vote.

If the nomination proposals are voted down as the non-mainstream lawmakers hope, it will effectively put an end to Moon’s political career, observers say. And if Moon manages to pass the measures, he faces another hurdle of a vote of confidence in his leadership, though it has not been decided when and how it will be done.

With Moon’s political fate now hanging in balance, Rep. Ahn Cheol-soo, a heavyweight opposition member, demanded that Moon drop his plan for a vote of confidence and postpone the central committee meeting, claiming that Moon’s gambling of his position has nothing to do with reforming the divided party.

Ahn said Sunday in an open letter to Moon putting his post on the line “is not the right solution to solve the troubles [facing the party]”, and it would only “spur further divisions” in the afflicted party.

Ahn went on to say that even if the central committee approves the reform-minded measures, they would lack legitimacy because Moon linked the vote with his political career, a move the first-term lawmaker said “transformed the committee’s mission to reform the party into a personal matter.”

“How could the decision made by central committee members have legitimacy and fairness?” asked the software mogul-turned lawmaker.

The former businessman also slammed the proposals advocated by Moon to overhaul the nomination system, echoing objections from lawmakers opposed to Moon that such measures “would do nothing to reform the party,” a remark seen by Moon’s supporters as a direct challenge to his command of the party.

The strong words from Ahn, who reluctantly gave up his presidential candidacy for the opposition bloc to Moon in 2012, once again exposed the deep-rooted mistrust among party members.

While Moon and veteran NPAD lawmakers agreed to postpone a poll on his leadership without setting a date, party floor leader Lee Jong-kul said that a poll should take place after the ongoing audit session on government branches ends on Oct. 8 to allow the party to concentrate on the audit.