FKTU manages to sell reforms to its leaders

FKTU manages to sell reforms to its leaders 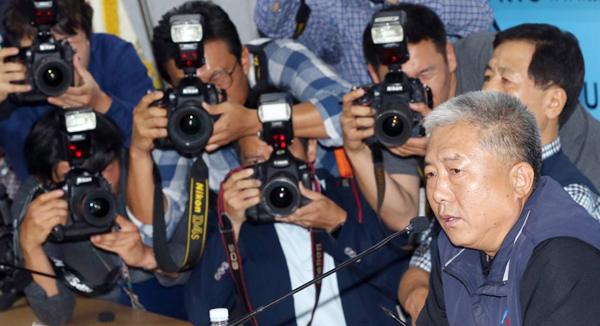 Federation of Korean Trade Unions Chairman Kim Dong-man, right, trying to convince union members on the tentative agreement he have reached with the government and business representative over the labor reform plans at the FKTU's headquarters in Yeouido, Seoul, on Monday. By Kang Jung-hyun

Unions finally agreed to back a breakthrough agreement on the government-led plan for labor reforms, which includes easier dismissals and a cut in wages for employees nearing retirement.

On Sunday, negotiators from companies, unions and the government finally agreed on structural reforms for the nation’s labor market, including two sensitive issues - adopting a so-called peak wage system that cuts wages for senior workers a few years before retirement and allowing employers to legally dismiss underperforming workers.

The Federation of Korean Trade Unions, a major umbrella union that agreed to the Sunday deal, held a leadership meeting on Monday with representatives of all the union’s industry sectors to obtain final approval for the deal.

At the end, the approval was granted, but the meeting was rocky.

An hour after the meeting started at 2 p.m., a union member attempted to set himself on fire by dousing himself with an accelerant.

“Kim Man-jae, leader of the union’s metal industry sector, appeared to be upset by the matter of the federation’s agreement on the easier dismissals,” a member of the federation said. “Another member immediately brought a fire extinguisher and sprayed it at him.”

Final confirmation by the federation was the last step in the negotiations for labor reforms, which have dragged on for months.

Although the chairman of the federation, Kim Dong-man, formally okayed the deal at the Sunday meeting with government officials and representatives of employers, signing of the agreement was postponed to Tuesday so that Kim could get confirmation from the members of the federation.

When the federation returned to the negotiations on Aug. 27, Kim said an approval from a central administrative meeting was mandatory for any deal.

Concerns once mounted among companies that the deal could be overturned due to protests from the federation. Companies and other industry insiders refrained from releasing official remarks on the agreement until the federation confirmed the deal.

“We are really worried that the deal could be overturned,” said an official from the Korea Employers Federation. “For us, the agreement is quite meaningful in some points, although it is partly lacking in details.”

But the matter of easier dismissals was more contentious. “We will arrange measures to improve overall contracts, with the participation of various labor specialists, in order to reform labor customs and management in the workforce,” the agreement says. “We will establish a fair evaluation system and clarify the standards and all procedures, from employment to layoffs, based on previous rulings… In this process, the government will never push them unilaterally and will go through enough negotiations with unions and management.”

Kim Dae-hwan, chairman of the Economic and Social Development Commission, a Blue House body in charge of arbitration, said the deal was basically made “with a long-term perspective.”

The Korean Confederation of Trade Unions, another major umbrella union that hasn’t attended talks with the government and employers since the 1990s, denounced that the deal and called it “collusion to worsen the labor market.”

“This is the worst-ever collusion [with the government and the management] that will bring a disaster to a majority of workers,” a statement from the confederation read. “The remark that the government would have ‘enough talks’ with us is an ineffective excuse.”

Although the agreement is basically seen a “guidelines” by the government for the private sector and will not be included in the labor act, many union members see the deal as a cornerstone for legislation in the end.

The ruling Saenuri Party started its own steps to legislate the issues in case the agreement wasn’t reached despite a protest from the federation.

The ruling lawmakers agreed on revisions of five laws regarding the labor market, including the Labor Standard Act.

They were proceeding with those changes Monday.

“We will seek fast legislation [on labor reform],” said Won Yoo-chul, the floor leader of the party, at a meeting with party members on Monday. “We will definitely pass it within the plenary session [until Dec. 9].”

Finance Minister Choi Kyung-hwan also called for “cooperation” on legislation of bills on the issues.

“The government will strive for legislation of five issues to increase flexibility and security in labor market, based on the agreement of the trilateral parties,” Choi said at a hearing of the parliamentary audit on Monday.

“We ask for cooperation [of lawmakers] to wrap up the issue within the plenary session.”

Opposition lawmaker criticized the deal, implying it would not be easy for the ruling party to move forward with legislation.

“The deal is an agreement to downgrade the quality of life and job security of the people,” said Lee Jong-kul, a leader of the New Politics Alliance for Democracy, at a leadership meeting on Monday. “Procedures for legislation [of the issues] still remain, and the matter has not ended, but now started.”