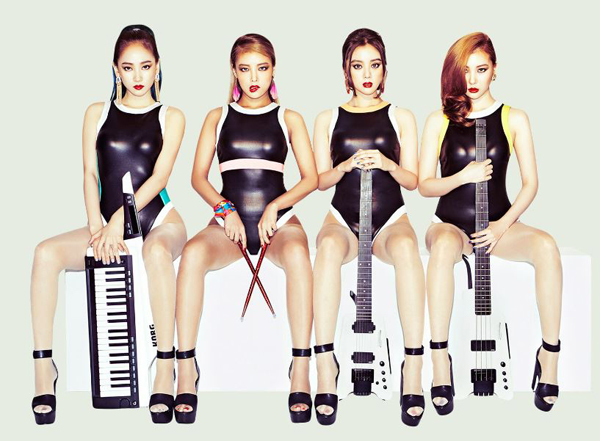 The K-pop girl group Wonder Girls has experienced one of the most dramatic instances of a rise and fall in the local music scene.

After launching as a five-member act in 2007 with “Irony,” the group generated hit songs, like “Tell Me” and “Nobody,” one after another.

But in 2009, just when the group had reached their height in Korea, they abruptly put a halt to their domestic activities and took off to North America under the leadership of their producer Park Jin-young, the head of their agency, JYP Entertainment.

Although they succeeded in reaching the rank of 76th place on Billboard’s “Hot 100” chart, the group’s U.S. debut was evaluated as a failure here, sometimes even mocked.

The ups and downs of the fickle industry is not all the girls have had to handle, however.

Throughout the life of the group, there has been a great deal of reshuffling, with founding members Hyuna and Sunmi being replaced by newcomers Yubin and Hyerim, followed by group leader Sunye and member Sohee recently leaving for personal reasons.

For their latest album, “Reboot,” released last month, Sunmi returned to the group to join Yeeun, Yubin and Hyerim.

And to emphasize their new direction, the group also underwent a complete makeover, taking to the stage again as a band with each member playing an instrument. So far, the effort has been a success.

In a recent interview with Ilgan Sports, an affiliate of the Korea JoongAng Daily, the quartet shared their experiences as members of the Wonder Girls over the years.

Q. The Wonder Girls appearing on stage as a band was truly a groundbreaking idea. Whose idea was it?

Yubin: Each of us knew how to play a certain instrument, and the ensemble we created was not so bad. It was a natural transformation.

Are you going to work as a band in the future as well?

Sunmi: I think it is better to say that Wonder Girls has obtained another weapon - performing as a band. Just because we are now in a band format doesn’t mean that we are not going to dance in the future. We are constantly thinking about our next move.

The group has worked with producer Park Jin-young all along. Was there a time when you guys didn’t get along?

Yeeun: Totally. But when I think about it now, he was always right. For instance, Park always let us hear his new songs. When I heard “Bad Girl Good Girl” for the first time, I instantly knew it was going to be a hit and asked him to give that song to our group. At the time, Park said we couldn’t dance as well as Miss A and gave the song to them. It has been five years since that incident, but I still remember it clearly. However, Park was right about the song as well. If it weren’t for Miss A, that song wouldn’t have been that much of a hit.

How do you all feel about Girls’ Generation, your long-time rival?

Yeeun: I think we should be appreciative of it because whenever Girls’ Generation is mentioned, we are talked about as well.

Yubin: When we shared the same standby room recently, we just told each other “good work” because we can both imagine how hard it would have been to prepare for the album and performance.

Sunmi: I think it is sort of irrelevant to call us rivals now. Too much time has passed, and it is no longer a head-to-head confrontation for us but has become a more relaxed one.

Why did you decide to go to the U.S. and start anew, leaving behind the top position in Korea?

Yeeun: It was Park’s idea. He thought we didn’t have anywhere else to go higher. It is true that I sometimes think about what it would have been like if we hadn’t gone to the U.S., but what is true is that the memories I made there are all so pleasant. There was only one performance a day, so the members had a lot of time on our own to enjoy.

How did you all feel about receiving Hyerim as a new member after Sunmi left the group?

Hyerim: I was kind of scared at first. They weren’t mean to me, but they hardly smiled.

Yubin: We were glad to have a new member, but I can’t say that we weren’t depressed about Sunmi’s departure.

What do you feel about Sohee and Sunye’s departure from the group?

Yeeun: Both of them did their best, and everything was decided after talking with us. Sohee had a dream of acting since she was very young, but when we went to the U.S, ,she had to give up a part of that dream. After returning to Korea, she thought it was her only chance to achieve that dream, which is why she left. And Sunye wanted to do missionary work after getting married. We truly and deeply understand that, which helped us let go of them.

After doing this interview, it feels like you all really get along with each other well.

Yubin: They are more like my family than my real family. We know how the others feel just by looking at their eyes.

Yeeun: Sohee comes by our house very often, too. She stays at our place all night to do puzzles. Sunye can’t visit us as often because she has her family now, but we always talk. We shared that time when we had nobody else but each other to depend on. That cannot be forgotten.