Designers gather in Paris to define what is precious

Designers gather in Paris to define what is precious

Maison&Objet Paris’s September edition is more committed to decor than furniture. Provided by the organizer

PARIS - Often considered the capital of the artistic and cultural realm, Paris becomes even more stylish every September with Maison&Objet Paris, one of the world’s largest trade fairs of home and lifestyle fashions.

And this year was no exception.

The North Paris-Villepinte Exposition Park, the venue for the fair, was bustling with design companies and buyers earlier this month, all looking for the same thing: the latest and hottest trends in the world of interior design and architecture.

Design companies - including some from Korea - set up colorful booths to illustrate their distinctive identities and products, while buyers carefully browsed through the spacious venue, which presented a whole new layout to celebrate the fair’s 20th anniversary.

Maison&Objet Paris is in fact held twice each year - in January and September.

Whereas the January edition is more focused on furniture, the September fair is more centered on decor, something that the French know best. And this year, it wrapped up its five-day run on Sept. 8.

This season’s theme, chosen by a group of artists, designers, marketers and sociologists based on inclinations in the world market, was “precious.” It was up to the exhibitors, of which there were about 3,000 this round, to decide how to interpret the theme.

Fair organizers say “preciousness” often indicates something rare and unique, and they chose the topic because they noticed a comeback of gold and well-crafted decorative arts. However, they emphasized that preciousness is a relative term.

“[It’s] a many-faceted theme,” Elizabeth Leriche, who was involved in selecting the theme, said. She explained preciousness can be interpreted in numerous ways such as “things that conjure up fragility, beauty, surrealism and even immortality,” as well as elements like air and water.

For Dorothee Meilichzon, the designer of this edition of Maison&Objet Paris, what’s precious to her designs is intimacy.

She designed the ELLE Decoration cafe at the trade fair. It featured colorful paintings and curved lines, but what stood out the most were the large tables that resembled the communal desks at libraries.

“I tried to create a space where people can empty their brains, have a good time and feel a sense of intimacy with others,” Meilichzon said in an interview with the JoongAng Daily at the Hotel Bachaumont in Paris, which she also designed.

The hotel’s restaurant is also all about intimacy, all open and leading to the pavement out front. She said she wanted the hotel visitors to feel like they’re part of Paris and the neighborhood.

“I wanted those who visit the hotel to feel what’s Parisian, feel the vibe of the neighborhood,” she said. “It’s a place where tourists can mix [with the locals].”

Meilichzon, who initially studied toy design, also said fun is an important element in her designs. She said that while she used to create fun for kids with her toy designs, she now imagines a “playground for adults” when designing the interiors of shops, hotels and more.

A pop-up book shop dedicated to the trade show’s theme this year. Provided by the organizer

One area at the exhibition where one could experience the highest level of creativity was the “Now! Design a Vivre” section, according to Mathieu Piazza, the international sales manager of Maison&Objet Paris.

“Offerings in this area,” he told the Korea JoongAng Daily, “are defined by exclusivity and creativity,” adding that exhibits here are products that are more artistic and high-end in addition to having their own identities and concepts.

Case in point was the “Floating Flower Garden” installation by Japan-based teamLab. The colorful installation - involving 2,300 flowers, their roots anchored overhead - drew quite a crowd to that part of the exhibition hall.

But what was especially interesting about this section is that for the first time in the history of Maison&Objet Paris, the organizers situated large design firms alongside small ones, giving the latter more exposure.

“In the past, we had booths of creators separately, elsewhere,” Piazza said, referring to small firms. “But for this season, we’ve decided to situate them alongside large companies as their clients are basically the same.”

The small firms’ booths were noticeably smaller, but as is often the case with trade fairs, location was key. 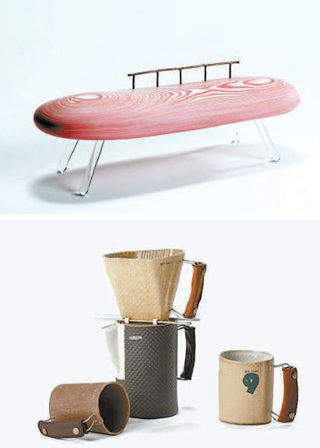 Another notable feature of the “Now! Design a Vivre” section was the presence of international firms.

It was there that many Korean exhibitors taking part in the trade show presented their offerings. They included the Korea Craft & Design Foundation, DDP Store, Decard, Lstore and I.Cera.

But the booth that stood out from the rest was that of I.Cera, which is in fact the global brand for Korean ceramics from Icheon, Gyeonggi, that the city came up with for the show.

Along with Gwangju and Yeoju, also in Gyeonggi, Icheon, has for centuries been a producer of high-end ceramics in Korea.

“Compared to ceramics from Gwangju and Yeoju,” Choi Soo-young of Icheon City’s Culture & Tourism Division told the Korea JoongAng Daily, “Icheon ceramics are more contemporary, and we consider that our biggest strength.”

The city selected 12 designers for Maison&Objet Paris, including Kwak Kyung-tae, Kim Nam-hee and Hyun Sang-hwa. It’s the first time that I.Cera took part in the trade show, but Icheon officials said that for a first-timer they garnered a lot of attention.

In the case of works by Hyun Sang-hwa, who makes cups of metal, leather and soil, they signed at least 10 deals by the afternoon of the second day of the show. Many visitors were intrigued by the matte, natural feel of the materials, according to Choi. The unique and humorous looking objects by Cho Sin-hyun also got a lot of inquiries, she added.

Icheon was designated a Unesco City of Crafts and Folk Arts in 2010 and signed a sister city agreement with Limoges in France for exchanges in these areas. Both the mayor of Icheon, Cho Byung-don, and his counterpart in Limoges, Emile-Roger Lombertie, were present to show their support for I.Cera, in addition to Korean Ambassador to France Mo Chul-min.

As for the Korea Craft & Design Foundation, this year marks the eighth year it took part in the fair. Lee Jae-young, one of the designers who showcased his works at the foundation’s booth, told the Korea JoongAng Daily that his Bluetooth speakers are made of hardwood that he found to be the most suitable for sound amplification. 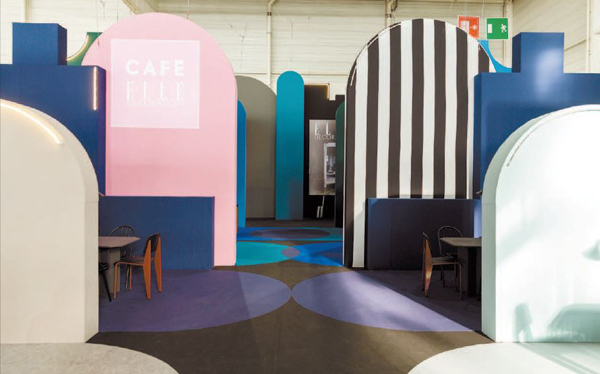 The ELLE Decoration cafe by Dorothee Meilichzon. Provided by the organizer 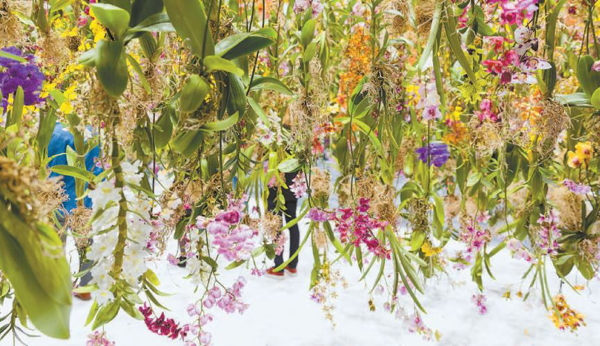 The “Floating Flower Garden” installation by teamLab. Provided by the organizer

Another Korean company that showcased its products at the fair was Lucell, which makes high-tech, innovative safes.

Eunice Kim, a senior managing director at the company, said that the company began in 1972 as Sun Safes, producing regular safes, but recently launched Lucell, a design safe line to cater to more decor-sensitive clients.

The company was the only Korean firm in the section dedicated to high-tech interior design. Other items on display included waterproof wallpaper and leather products.

“We took part in Maison&Objet Singapore last year and this is our first time participating in Maison&Objet Paris,” Kim told the Korea JoongAng daily. “I think we are able to showcase our products here because our Lucell product line is committed to technology innovation and interior design.”

What made Maison&Objet Paris even more exciting this time around was that the fifth annual Paris Design Week also took place from Sept. 5 to 12 at various venues in town.

Compared to the trade show, it’s easier and cheaper for design students and up-and-coming designers to acquire space and showcase their works at the Paris Design Week, according to Charles Camicas, one of the publicists for both of the events.

Of the various programs that took place during the design festival, the “Now! le Off” exhibition in particular served as a springboard for emerging designers from around the world, including two from Korea.

Gemstone, a team of 13 young designers from the Living Products Design Department of Yeungnam University’s Design and Art College, presented about 20 pieces, mostly lighting fixtures, many of which were inspired by traditional Korean objects like millstones and charcoal briquettes.

“Our designers studied for years what constitutes good lamps,” Prof. Jung Myung-taek from the department told the Korea JoongAng Daily. “We realized traditional Korean culture in the form of contemporary lighting devices. I believe finding universal elements in what’s quintessentially traditional designs is also something that’s appropriate for the theme of Maison&Objet Paris.”