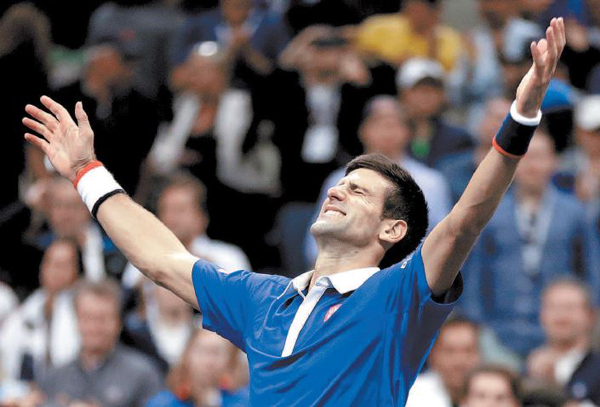 Novak Djokovic of Serbia reacts after defeating Roger Federer of Switzerland in the men’s championship match of the U.S. Open tennis tournament on Sunday, in New York.[AP/NEWSIS]

NEW YORK - After winning a point in the U.S. Open final, and bent on proving a point, Novak Djokovic leaped and roared and threw an uppercut, then glared at some of the thousands of spectators pulling for Roger Federer.

Following another point in that game, Djokovic nodded as he smiled toward the stands. And moments later, Djokovic shook his right arm, bloodied by an early fall, and screamed, “Yes! Yes!” to celebrate a missed forehand by Federer.

Djokovic appeared to be all alone out there in Arthur Ashe Stadium, trying to solve Federer while also dealing with a crowd loudly supporting the 17-time major champion proclaimed “arguably the greatest player in the history of the sport” during prematch introductions.

In the end, Djokovic handled everything in a thrill-a-minute final on a frenetic night. Thwarting Federer with his relentless defense and unparalleled returning, Djokovic took control late and held on for a 6-4, 5-7, 6-4, 6-4 victory Sunday to earn his second U.S. Open title, third major championship of the year and 10th Grand Slam trophy in all.

Contorting his body this way and that, sneakers squeaking loudly as he changed directions or scraping like sandpaper as he slid to reach unreachable shots, Djokovic forced the 34-year-old Federer to put the ball into the tiniest of spaces. And it didn’t work. Federer wound up with 54 unforced errors, 17 more than Djokovic.

Another key statistic: Djokovic won 10 of the first 12 points that lasted at least 10 strokes, a pattern that repeated itself throughout the evening.

Perhaps the most pivotal of all: Djokovic saved 19 of the 23 break points he faced, while winning six of Federer’s service games.

From late in the third set to 5-2 in the fourth, Djokovic took control against a wilting Federer by claiming eight of 10 games. Federer made one last stand, breaking to get within 5-3 and holding for 5-4, but one last forehand return that flew beyond the baseline left Djokovic as the champion, pointing to his heart.

After all the attention paid to Serena Williams’ bid for the first calendar-year Grand Slam, which ended with a semifinal loss at the U.S. Open, it’s Djokovic who reached all four finals. He beat Andy Murray at the Australian Open in January, lost to Stan Wawrinka at the French Open in June, then beat Federer at Wimbledon in July.

The 28-year-old from Serbia also won a trio of majors in 2011, and his career total ranks tied for seventh-most in history behind Federer.

Djokovic evened his head-to-head record with Federer at 21-all. They have met in three of the last five Grand Slam finals, and Djokovic is 3-0 in those. It is as spectacular a rivalry as there is in tennis right now, with contrasting styles of play.

“Being back in a final is where you want to be,” said Federer, who owns five U.S. Open titles but last played for the championship in 2009. “Playing a great champion like Novak is a massive challenge.”

When it was over, Federer assured the crowd he would back next year.

His coach, Stefan Edberg, figures an 18th major title is still not out of reach, even though no one Federer’s age has won the U.S. Open since 1970.

“He came close at Wimbledon. He came close this time. ... You still cannot count him out,” Edberg said. “If he keeps playing at this level, he’ll get another shot.”

If there were many folks in favor of Djokovic in the 23,771-capacity arena, they were tough to hear. Instead - and make no mistake, Djokovic noticed - a vast majority were on Federer’s side, even applauding faults by Djokovic, considered poor tennis etiquette. Over and over, chair umpire Eva Asderaki-Moore, the first woman to officiate a U.S. Open men’s singles final, held up a hand the way a school teacher might and asked for quiet.

“Was it louder than ever? Maybe,” Federer said. “It was unreal.” AP