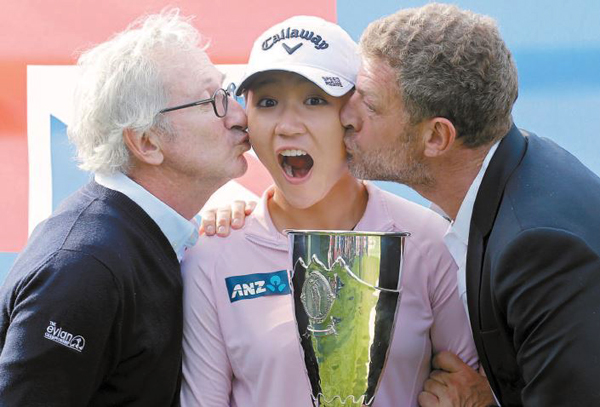 EVIAN-LES-BAINS, France - With two holes left to play in her bid to become the youngest LPGA major champion at the Evian Championship, Lydia Ko stayed as relaxed and composed as a seasoned veteran. The South Korean-born New Zealander birdied both on the shores of Lake Geneva to reach a new landmark in her short but already storied career.

A flawless final-round display - featuring spectacular approaches and clinical putts among her eight birdies - made Ko the youngest major champion in LPGA Tour history on Sunday. She closed with an 8-under 63 for a six-stroke victory over Lexi Thompson at the final major of the season.

It was the best round of this year’s tournament, a score that helped her to a ninth career victory with a 16-under total of 268.

“To say that I’m the youngest in history for now, it’s so cool,” Ko said. “To finish with two birdies, finish on the last 72nd hole, with a birdie, it doesn’t happen often, so it’s definitely one of the top rounds of my whole entire life, and I’m sure it will be in my career.”

Ko is 18 years, 4 months and 20 days old. She eclipsed the previous record set by American Morgan Pressel, who was 18 years, 10 months and nine days old when she won the 2007 Kraft Nabisco Championship.

While Ko thrived under pressure, Lee Mi-hyang crumbled. The South Korean had an overnight lead of one stroke over Thompson but finished tied for fourth place, nine back. Chinese Shanshan Feng was third with an 8-under total of 276.

Ko has been breaking records even before she turned professional two years ago.

Tipped as a future great of the game, she was already the youngest winner on the Tour after her win at the Canadian Women’s Open in 2012, and the youngest player of either gender to reach the No. 1 spot when she did it earlier this year.

“Everyone won’t be asking me when I’ll win my first major because it’s done,” said Ko, who was two shots off the pace heading into the final round.

On a damp but dry morning, she kept her cool when Thompson got off to a flying start.

Ko, Thompson and Lee were grouped together after organizers decided players would tee off on the first and 10th tees in threesomes, fearing expected bad weather would play havoc with the schedule. The elite trio started with a par on the first hole before Thompson set a tremendous early pace with four birdies in her first seven holes. The American converted a long putt for birdie on the par-3 second then played a three-hole stretch in 3 under from Nos. 5-7. She couldn’t stay bogey-free on the front nine, though, missing a putt from close range on the par-3 eighth.

“It’s kind of hard to beat somebody that shoots 63,” said Thompson. “She played amazing. She deserves it. She ball-struck the heck out of this golf course and putted it really well. You can’t get much better than that.”

Ko was one shot behind Thompson at the turn, with three birdies on Nos. 3, 7 and 9.

The Kiwi golfer hit a wonderful second shot on the par-4 11th that landed on the edge of the green and rolled to within 10 feet of the cup, bringing out a big smile on her face. Her next shot - a downhill birdie-putt - found the hole to draw level with Thompson at 12 under.

That shot signaled a swing in the momentum.

Ko came close to an eagle on No. 12 but her ball hit the flagpost and bounced, stopping within five feet of the hole. Ko made no mistake with her next putt and moved one shot clear at the top. She capped her day in style with consecutive birdies on Nos. 17 and 18 before celebrations started with some of her opponents spraying her with water on the course.

“I said before that my goal coming into today was to make par on 18, and that’s still not accomplished yet,” joked Ko, who had bogeyed the last hole on her three first rounds. “I’ll be back next year to do that.” AP