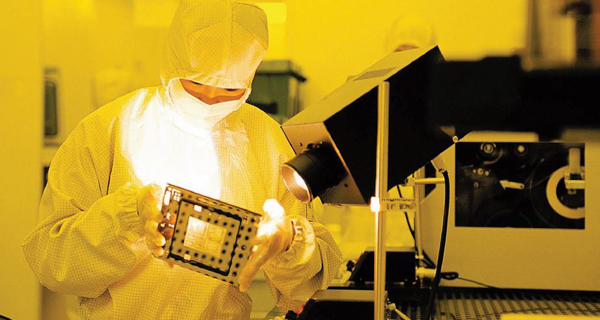 A worker at Samsung Electronics’ production unit in Hwaseong, Gyeonggi, inspects a semiconductor component. Provided by the company

Samsung Electronics hasn’t always been a leader in the global semiconductor market.

In 1998, Samsung Electronics had a market share of just 3.4 percent, while rival Intel accounted for 16.9 percent - a gap of 13.5 percentage points.

Seventeen years later, that gap has fallen to just 2.1 percentage points. As of the first quarter this year, Intel’s market share has sunk to 13.3 percent, while Samsung’s has risen to 11.2 percent.

Some industry insiders are even speculating that in the future, Samsung could outpace Intel in the memory chip market.

“We started out with large investments since 1983, but back in those days, Intel was a giant that could not be surmounted,” said a high-ranking official at Samsung Electronics.

“What we have achieved is a miracle.”

At Samsung Electronics’ memory chip unit in Hwaseong, Gyeonggi, manufacturing equipment and machines are neatly arranged in a hangar the size of four football fields.

Robots attached to rails on the ceiling busily move plastic boxes of memory wafers. Except for a few workers occasionally checking on the machines, there are no other people on the floor.

Thirty years ago, most of the work that these machines are doing was done by actual employees. But the company’s high cleanliness standards make it difficult for anyone but a robot to do the assembling.

For instance, women who worked the line weren’t allowed to wear makeup, even in their off hours, to ensure that not a single speck of stray powder or dust made it onto the line. 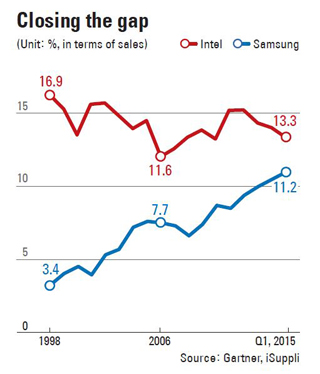 “After joining the company, I didn’t wear makeup for seven years,” said Suh Ae-jung, a 53-year old employee who has worked here since 1981.

The only day she was given permission to get her makeup done was for her wedding, in 1988.

Samsung jumped into the semiconductor business against all advice, with analysts saying the field was already too competitive.

It started when Samsung Group Chairman Lee Kun-hee, then an executive at Tongyang Broadcasting Company, acquired 50 percent of Korea Semiconductor’s factory in Bucheon, Gyeonggi, in 1974 using his own money.

“After experiencing an oil shock during that winter, Chairman Lee decided it was imperative for [Samsung] to start a value-added business. Otherwise, the company would have no future, he decided, so he purchased the company,” a Samsung official said.

When Samsung unveiled plans to develop advanced 64-kilobyte DRAM memory chips, a type of semiconductor, even the company’s own employees opposed it.

“Chairman Lee sent all the employees who had issued opposition reports to the DRAM development team,” said Moon Sang-young, the head of M Precision who was
then a junior official at Samsung
Semiconductor.

“It was his way of saying: use the courage it took to dissent to confront new challenges.”

Samsung Semiconductor, which only had the technological capacity to manufacture low-end memory chips used in digital clocks, succeeded in making, assembling and testing the 64-kilobyte DRAM chips within six months of the announcement.

Whenever faced with challenges, Samsung made decisions based on incisive assessments of market conditions, which allowed it to make bold investment choices. One was the decision to manufacture 200-millimeter (8-inch) wafers, which led to Samsung Electronics becoming the top player in the memory chip industry by 1992 - a position it has kept for the subsequent 23 years.

When demand for memory chips fell in the late ’90s and again in 2008, Samsung invested in new facilities and research and development, which helped boost its competitiveness.

“The top management’s bold decisions and initiatives have made possible the legendary memory chip performance,” said Jeon Han-seok, the CEO of the Institute of Global Management, a Korean think-tank.

Another factor behind its No.1 position is consistent development of new technology. Last March, Samsung Electronics became the first company in the world to mass produce 8-gigabyte DRAM chips, which have 125,000 times the memory capacity of its original 64-kilobyte chips. The new chips were made possible by innovations like 20-nanometer processing.

Samsung’s third-generation vertical NAND (V-NAND) flash chips are another example of new technology that came from thinking outside the box. The chips stack cells vertically rather than horizontally to dramatically improve the amount of data that can be stored.

“If the existing technology is like building a bunch of densely packed houses on a small plot of land, V-NAND is like building tall apartments,” said Lee Un-kyeong, an executive at Samsung’s flash development division.

Intel is the No.1 player in the market, while Samsung ranks fifth with a market share of just 3.1 percent.

However, Samsung Electronics did manage to increase its market share in the application processing industry, a key component in smartphones, to 9.6 percent in the first quarter of this year.

The company’s production capacity will increase further once its unit in Pyeongtaek, Gyeonggi, opens in 2017. The company has invested 15.6 trillion won ($13.2 billion) in the site, which will be the world’s biggest memory chip production unit.

Samsung Electronics is also a leader in the smartphone market and the top player in the television market, but the future isn’t all roses.

The biggest challenge is China’s advance. China’s smartphone market is already the biggest in the world. The Chinese government has also issued plans to invest 1 trillion yuan ($157 billion) over the next 10 years to increase the output of Chinese-made semiconductors.

“More aggressive investment in system semiconductors is imperative for taking the lead in the semiconductor business,” said Joo Dae-young, a researcher at the Korea Institute for Industrial Economics & Trade.

“A sustainable future exists with semiconductor-based IT, fintech and IoT tech,” said Cha Sang-gyun, a professor of electrical engineering at Seoul National University.