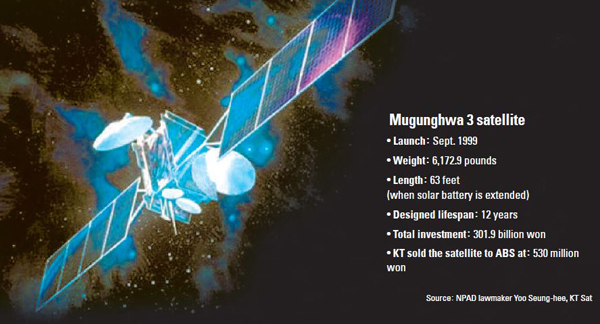 The Mugunghwa 3 satellite, which KT was accused of illegally selling to Hong Kong-based satellite operator ABS for well below its value last year, is now a cash cow.

The satellite is bringing in roughly 10 million euros ($12.69 million) in sales for ABS every year, according to data compiled by Rep. Yoo Seung-hee of the New Politics Alliance for Democracy (NPAD) on Monday.

“We have lost roughly 405 billion won, including the 301.9 billion won spent on building the satellite and 105 billion won that ABS has earned from its ownership of Mugunghwa 3,” Rep. Yoo said at a parliamentary audit session of the Ministry of Science, ICT and Future Planning at the Gwacheon Government Complex on Monday.

After purchasing the satellite in April 2010, ABS was acquired by the British private equity firm Permira Fund the same year.

According to the reports, ABS made three new contracts with three different broadcasting businesses worth at least 10 million euros using the Mugunghwa 3 in February 2011 alone.

The satellite, which was first launched by Korea in 1999, was initially designed to last 12 years. According to local telecommunications experts, however, the Mugunghwa 3 has enough fuel to be used until 2017.

At its current rate, ABS is on track to make cumulative sales of about 70 million euros using the satellite through 2017.

Yoo accused the ICT Ministry of not trying hard enough to buy the satellite back, or punishing KT sufficiently compared to the size of the losses.

KT’s unauthorized sale of the satellite was first unveiled at a parliamentary audit in 2013, when the company claimed the Mugunghwa 3 had already outlived its 12-year lifespan.

After the accusation, the formerly state-owned company was charged with illegally selling the satellite in December in the same year. The ICT Ministry, the regulator of KT, ordered the company to negotiate with ABS to buy back the satellite at the end of 2013. It also filed a lawsuit against former KT Chairman Lee Suk-chae, and fined KT 7.5 million won.

Critics accused the fine of being insignificant, and Lee was never formally indicted. KT Sat, KT’s satellite broadcasting arm, hasn’t made progress in negotiations with ABS to repurchase the satellite since April 2014, when ABS withdrew from talks.

The Mugunghwa 3 is in orbit at 116 degrees east, right above the equator. This geostationary orbit is one of Korea’s space territories assigned by the International Telecommunication Union (ITU), a group in charge of managing rights for artificial satellites and their frequency bandwidths.

Since only a limited number of satellites are allowed in orbit right above the equator, competition among countries is fierce.

Although the Mugunghwa 3 was sold to ABS, KT said it still has ownership of the orbit, which was allotted to the company by the Ministry of Science, ICT and Future Planning. But both the company and ministry are concerned that the discrepancy between the ownership of the satellite and the orbit could prompt the ITU to take the orbit away.

Under ITU rules, the union can reclaim any positions that haven’t been used for three years after being registered.

In order to maintain ownership of the orbit, KT must move the Mugunghwa 3 to another orbit and launch a new satellite to take its place.

In April 2014, the ICT Ministry announced plans to launch a new satellite, the Mugunghwa 7, next to its old satellite to maintain Korea’s possession of the orbit.

“The ministry is aiming to launch Mugunghwa 7 by 2016,” according to Choi Yang-hee, the minister of ICT, at the audit on Monday.

Despite the announcement, Rep. Yoo argued that the ministry should be more assertive.

“The ICT Ministry should take more a action in claiming rights for the Korean orbit, and if necessary, it needs to put more punishments on KT,” Yoo said.