Living alone at 90 with memories and visitors

Living alone at 90 with memories and visitors 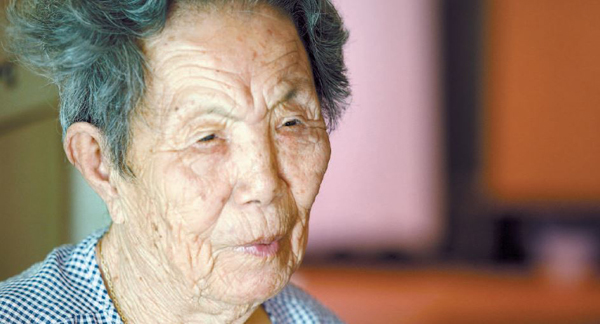 She left her native Dangjin because she wanted to become a nurse. Instead, she was forced into sexual slavery. By Kim Sang-ho

The JoongAng Ilbo collected the oral histories of 13 survivors of sexual slavery during World War II over the past weeks. As all the women are in their 80s or 90s, this may be their last record of their personal stories. The series marks the 70th anniversary of Korean liberation from colonial rule and the JoongAng Ilbo’s 50th anniversary. This is the 10th in the series.

During World War II, Lee Gi-jung, then 15, was offered a job as a nurse.

Instead of being employed as a nurse, however, she was taken to a Japanese military brothel in Singapore and forced to serve as a sex slave to soldiers there.

Lee, now 90, is enthusiastic whenever she has visitors to her house in Dangjin, South Chungcheong, where she lives alone.

“I was surprised to hear the cawing of magpies in the morning. It was not time for my granddaughter to come, so I thought maybe guests were coming to my house,” she says, as she sits for an interview with the JoongAng Ilbo. “Thank you for visiting me.”

Lee’s granddaughter visits once a month and workers from the local health center visit every two weeks, so she leads a lonely life.

A caretaker visits during the day to provide companionship, but Lee spends most of her time by herself.

Lee was lying down in the sweltering heat, but props herself up and turns on the fan. She brings out yogurt drinks and ice cream.

“It’s been one year since I went to church because my legs hurt. I fell and was taken to the hospital by 119 rescue workers and underwent surgery. I was hospitalized for a month. I haven’t been able to walk since then. So I just sit. I’ve forgotten all the hymns I used to sing.”

On her thigh is a scar the size of a finger.

It is from her fall last year.

“When I wasn’t in pain, I used to take the walker and go around quite a bit. The government gave it to me, so that I can walk sturdily when I am out and about.”

“Because I dragged it around everywhere, the rubber of the wheels is all worn out. I wish the height of the wheeler could be increased too.”

She gazes blankly outside.

“Living is tough, what else is it? When you go to heaven, there will be no worries. When you are old, there is nobody who comes to you and nobody who likes you.”

Lee was forcibly taken to a Japanese military brothel in Singapore when she was 15.

She left her native Dangjin because she wanted to become a nurse. Instead, she was coerced into sexual slavery.

“They told me they will make me a nurse and that I would earn money. But they took me to a strange place. Sounds of shells exploding could be heard.”

Scholars and the United Nations estimate that up to 200,000 women like Lee were forced into sexual slavery by the Imperial Japanese Army during its colonial rule (1910-45) over the Korean Peninsula.

The administrators of the comfort station did not explain anything to the young girls that were brought there to serve as so-called “comfort women.”

Lee wanted to run away but couldn’t.

“If we protested, we were beaten, and those who tried to run away were sometimes even killed, so we had to endure it even if it hurt,” she says. “I was resentful and cried and thought I wanted to die, but what can I do now?

“If I speak of it, my insides become disturbed.”

She found hope just once during her life at the comfort station. It was when the army unit said it would withdraw from Singapore and move to Taiwan. “I thought when we were following the soldiers from Singapore to Taiwan, there would be a chance to escape. But that was not the case.”

In fact, the situation grew worse. As the war became prolonged, the soldiers became even more violent. “I was supposed to die then, but I wasn’t able to,” she says.

After suffering five years of hardship, Korea was liberated from Japanese colonial rule with the end of World War II, but Lee was not able to return to her family.

She was ashamed that she had been forced into sexual slavery.

“I couldn’t tell that to my father,” she asks. “How could I say such a thing? I was the sinner.”

Instead, she met a man 20 years her senior and married him. She describes him as a warmhearted person.

When Lee was not able to get pregnant, they adopted a boy and raised him as their son. But both husband and son died, and her granddaughter is her last remaining relative.

While Lee has been deceived by people and endured harsh suffering, she is also thankful to people she met.

“I sometimes wondered why I had been dragged away to become a comfort woman and lived with such hardships, but when I think of the [Korean] government that has helped me, I am thankful, and even when I am bored and lonely, when there are people who come visit me, I am thankful. After my hubby passed away, there was a girl who came to visit me and cut my fingernails, and I am thankful.”

With tears glistening in her eyes, she holds the reporter’s hand and says, “Thank you for coming a long way when it’s so hot. My mind is still fine, so I will live a bit longer. Do come again.”