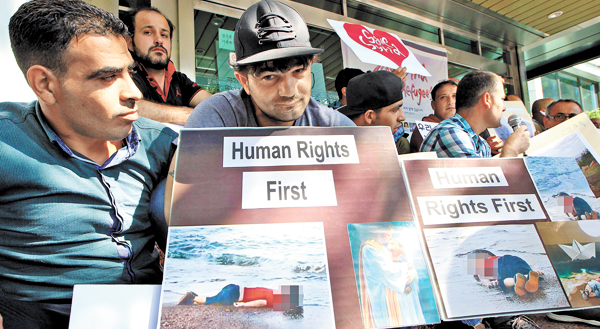 A group of 27 displaced Syrians hold up a photograph of a Syrian child, who died in Turkish seas, outside the National Human Rights Commission in Mugyo-dong, central Seoul, on Sunday. There are nearly 800 displaced Syrians in Korea who want to raise awareness of asylum-seekers in Korea who need government help and public support. By Cho Mun-gyu

Omar Alnadas, a 42-year-old father of four, is a displaced Syrian seeking official refugee status by the Korean government in the hopes of being able to see his family again - in Korea.

He is one of nearly 800 displaced Syrians who have applied for refugee status in Korea.

A group of more than two dozen other Syrian displaced persons on Sunday participated in a campaign to raise awareness of their plight in front of the National Human Rights Commission in Mugyo-dong, central Seoul.

Alnadas came to Seoul three years ago in search of a job, leaving behind his wife and four children.

“Early this year, my 11-year-old second daughter, Patma, crossed the border on her way to a refugee camp in Turkey when she was hit by a car and severely injured,” he told the press in front of the commission. “I feel guilty that I could not protect my injured daughter. Please help me meet my children again.”

As the civil war in Syria worsened at the beginning of the year, his family grew scared that the oldest son, 17-year-old Muhammad, may be taken away by the Islamic State. Earlier this year, they left their home toward the Turkish refugee camp when Patma suffered the accident.

The campaign, organized by Refuge pNan, a Korean non-governmental human rights organization, called for the “humanitarian reunion of displaced persons” and was aimed at raising awareness that a considerable number of displaced Syrians currently reside in Korea.

They called for “the aid of the Korean government and society to help those Syrians who were separated from their families to see them again.”

But many like Alnadas don’t know if that wish will ever be granted.

The Ministry of Justice confirmed that there were 797 Syrian asylum-seekers in Korea as of the end of
August.

Refuge pNan said only three have been granted refugee status in Korea.

As of the end of July, 619 were granted humanitarian status by the Korean government, under which they can work.

But they are not entitled to any social welfare benefits, including health insurance, given to people with refugee status. Nor are they able to invite their families to join them.

“We do not issue separate refugee visas, so these individuals came to Korea on other visas and then applied for refugee status,” a Ministry of Justice official said. “We can offer them humanitarian status and support.”

The official was not able to immediately confirm the total number of Syrians in Korea, but added that “most of them are displaced persons.”

Lee Jae-rin, a Refuge pNan staffer in charge of organizing the campaign, pointed out the difficulty these Syrians have with attaining refugee status.

“To my knowledge, the three who were granted refugee status were involved in anti-government activities back home and needed political protection,” Lee said. “But most refugees are not targets of the Syrian government because of politics. They are war refugees.

“However, refugees from war are not entitled to official refugee status under Korean law,” she added. “Instead, they are given humanitarian status.”

Many of the Syrians residing in Korea, Lee said, were involved in automobile manufacturing and came to Korea on work visas.

Many of these Syrians came to Korea between 2011 and 2014, she added, and following the outbreak of civil war back home and the rise of ISIS, they were not able to return home.

They often are involved in the automobile industry, exports and car cleaning here, she said.

“A means to reunite them with their family is a priority,” Lee said. “They also don’t have any means of subscribing to health insurance, and since they can only speak Arabic, they need help learning the Korean
language.”

According to the Ministry of Justice, the number of people who applied for refugee status nearly tripled from 1,011 in 2011 to 2,896 last year.

The number of refugee applicants from Syria has jumped since civil war broke out in 2011.

Korea joined the UN Refugee Convention in 1993 and became the first Asian country to enact and enforce the Refugee Act in July 2013. The number of refugee applications has increased drastically ever since, but the approval rate of refugees is dropping. In 2014, 3.2 percent were approved for refugee status.