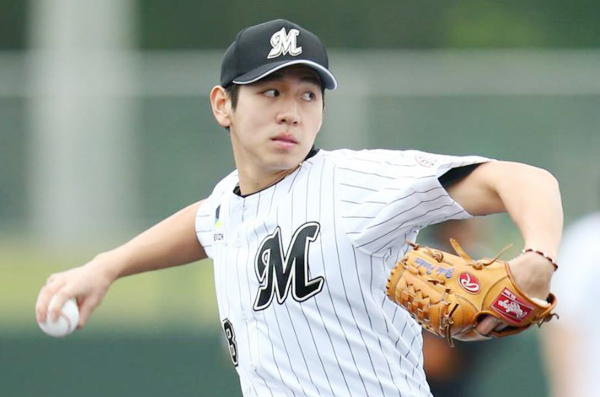 Chiba Lotte Marines pitcher Rhee Dae-eun is one of the top candidates to be included in Korea’s final roster for the Premier 12 international baseball tournament in November. Photo from the club’s Facebook page

But Kim, who previously led Korea in two World Baseball Classics, the 2000 Summer Games and 2002 Asian Games, is not giving up hope. The 68-year-old manager is watching one right-hander: Chiba Lotte Marines’ Rhee Dae-eun.

“I saw a clip of Rhee Dae-eun in the Nippon Professional Baseball [NPB], and he seemed to have a good fast ball and can utilize some breaking balls,” said Kim. “In the final squad, we’re going to pick about 13 pitchers. We’ll watch him closely for a month.”

It is too early to tell whether Rhee will be included in the 28-man final squad that will be announced on Oct. 10. But sports pundits suggest he will be a likely pick because the 26-year-old has experienced baseball in the United States and Japan, as both a starter and a relief pitcher.

After graduating from Shinil High School in 2008, Rhee joined the Major League Baseball club Chicago Cubs. However, he has never made it into the big leagues even though in his last year in Triple-A he went 3-2 with a 3.75 ERA. For seven years in the minors, Rhee went 40-37 with a 4.08 ERA in 135 games.

Last December, Rhee moved to Japan after signing a one-year deal with the Chiba Lotte Marines, hoping to reignite his career. When he joined the NPB club, Rhee captured the spotlight with his good looks and some fans called him “Hallyu Ikemen” (Korean handsome guys).

Rhee is currently looking to become the first Korean to collect 10 wins in the NPB. He is marking 9-6 with a 3.95 ERA. He has been struggling recently and failed to collect his 10th win for more than a month since his ninth win on July 30. He has also been switched from starter to reliever, while getting four losses straight after his ninth win.

Fans hope Rhee will overcome his recent slump to get his 10th win as the Marines face the Hokkaido Nippon-Ham Fighters on Wednesday.

Rhee’s motivation during his slump has been his family. He has the letters “+CDBJD” tattooed on the left side of his neck. As a Christian, the first letter indicates a cross while the other letters are the initials of his parents and two sisters.

“My son cuts my hair,” Lee’s father Rhee Cheol-saeng told the JoongAng Ilbo on Sept. 1 at Tokyo Dome. “It’s difficult to find a barber shop in the U.S., so my son started to cut my hair.”

The father and son meet once a month. The senior Rhee, who now lives in the United States, said he hasn’t had his hair cut for a month and is waiting for his son to cut it for him.

The senior Rhee is a big baseball fan. When his son is playing he researches the Marines’ situation and also the opponents. Cheol-saeng said he wanted his son to become a baseball player although Dae-eun was talented in art and was also good in his general studies.

Dae-eun had an affection for baseball. Cheol-saeng said he wrote a diary since his son was in high school that tracks his son’s training results. He also organized a training schedule for the son, pushing programs such as stair-climbing and jumping rope.

“I’m just thankful my son followed me without any resistance,” Cheol-saeng said.

After joining the Marines, Dae-eun got more attention than ever. Japanese media have reported that the Marines are considering extending his contract.

There was speculation that Dae-eun got U.S. citizenship after his family immigrated to the U.S. when he signed with the Cubs, but his nationality is still Korean, making him eligible for the national team.

Rhee has already said that he wants to wear the Korean national team uniform. That dream will be decided on Oct. 10 when the Korea Baseball Organization announces its final squad for the Premier 12.