‘Dream’ plays with fact and fiction

‘Dream’ plays with fact and fiction

Artist Cho Duck-hyun’s new exhibition, “Dream,” is an artistic version of a mockumentary or fake documentary about a fictional character also named Cho Duck-hyun. The elaborate pencil drawings depict the scenes from films that the character Cho, an unsuccessful movie actor who died alone, insisted that he appeared in, including the famous “Casablanca” (1942). By Nathing Studio

One day, Cho Duck-hyun, 58, a Korean artist well known for his installation works mainly about history from an individual’s point of view, searched for his own name on the Internet. Among the many different persons with the same name, film actor Jo Deok-hyun, 48, caught the artist’s attention. Their names are spelled the same in Korean.

“The actor inspired me, as I was thinking about creating a series of art pieces that tells a story about a fictional character, just as a movie or novel does,” the artist told the Korea JoongAng Daily at the Ilmin Museum of Art in central Seoul last week. So the artist contacted Jo and requested his cooperation. The result is the exhibition titled “Dream” going on at the museum.

Visitors to the exhibition could become confused, since the show is an artistic version of a mockumentary or fake documentary about Cho Duck-hyun - not the artist himself but a fictional character of the same name created by the artist.

The fictional Cho is an unsuccessful actor who died alone in 1995 at the age of 81. The exhibition consists of the articles he left behind, an installation piece that reproduces the small rented room where he spent his final days, a video piece that portrays his daily life, and elaborate pencil drawings depicting scenes from films he insisted he had appeared in. 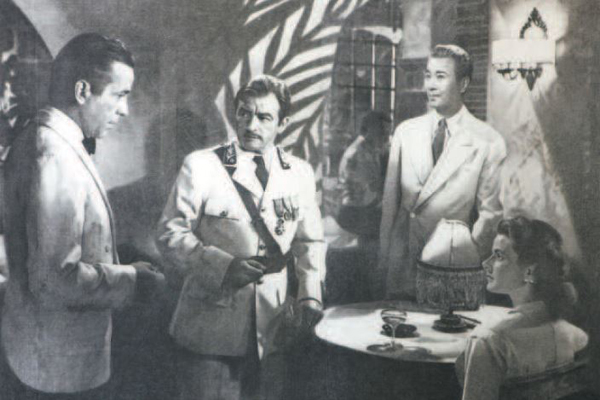 To further confuse visitors, the fictional actor Cho is portrayed by the real-life actor Jo in the video and drawings.

In addition, there is another layer of fiction. The story of the unsuccessful actor Cho is fiction, but the drawings that depict Cho appearing in famous movies such as “Casablanca” (1942) are not even accurate in that fictional story. “That is just what the old man Cho, a former actor, insists,” the artist explained. “In this fictional story, it is not even certain whether Cho was a real actor or just a minor movie employee.”

“Still, Cho’s life is closely tied to the true turmoil of Korean history in the 20th century,” the artist continued. “Through the works, I’d like to speak of not only the imperfection of an individual’s memories and that of history - the collection of such memories - but also the vague borders between fiction and history.”

Besides actor Jo, novelist Kim Ki-chang also collaborated on the exhibition, writing a short story about the fictional Cho.

“Garden of Sounds” is an installation piece by Cho inspired by Korean-born composer Isang Yun. The space is filled with Yun’s music as well as shadows cast by plants that move very delicately. It is located on the third floor of the Ilmin Museum of Art in central Seoul.

The exhibition “Dream” is a semi-retrospective of the artist Cho. On the first floor are his latest works about the fictional actor Cho, and on the second floor are the artist’s other installation works about the memories of individuals entwined with history.

The third floor houses another installation piece by the artist with a somewhat different theme. “Garden of Sounds” was inspired by Korean-born composer Isang Yun, who was active mainly in Germany.

“He is a figure of great controversy in regards to the ideologies of a divided nation, but there is no dispute that he is a great musician of Korea that left a clear legacy in Western music history. I wanted to focus on his music, often overshadowed by the controversy about his ideology, and created an art piece that would go with his music” Cho said.