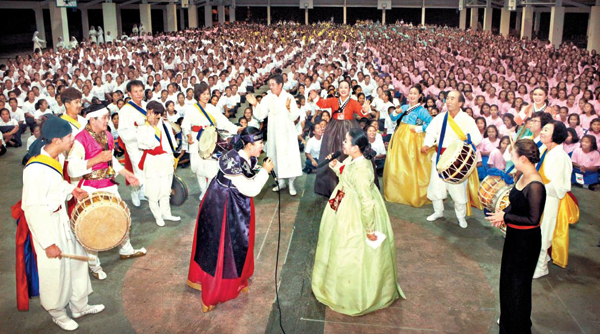 In the heart of the Girlstown school campus in Cavite, the Philippines, the Bujiwa arts company from Korea performs a traditional dance. This benefit concert marks the 14th time the group has brought a fascinating and moving experience to the event.

CAVITE, the Philippines - In the small city of Cavite, 60 kilometers (32 miles) from the Philippine capital of Manila, the sound of a taepyeongso (traditional Korean wind instrument) pierced through the darkness and disrupted the stillness. It was the start of a concert by a group of Korean traditional performers and musicians on Sept. 7.

The taepyeongso accompanied a rendition of “Binari” played by Bitgeoul Samulnori, a Korean traditional percussion quartet led by Shin Nam-hyun. Thus began the 2015 Korean Traditional Performing Arts Festival at the Sisters of Mary Girlstown school. The audience, consisting of about 3,000 female students, sat in neat rows and clapped and cheered along with the captivating dances and songs that filled the stage.

Then, Lee Sang-bok, leader of the Nalmoe Book Chum troupe, appeared on stage ready for a drum dance called “Book Chum.” The stage turned into a vivacious dance floor, as the students filled the air with their cries of delight. Though they were witnessing a Korean traditional drum dance for the first time, their enthusiasm proved that the pleasure people feel from experiencing it can be shared regardless of one’s national or ethnic identity.

The rendition of “Arirang” by the leader of the AramNuri arts company, Jung Kyung-suk, touched the students’ hearts and reverberated throughout the campus. And Hwang Jin-kyung, a dancer from the Bujihwa arts company, fascinated the audience with a shamanic dance called “Mudangchum.” In particular, the sword performance, which involved spinning a sword around 360 degrees, held the audience’s attention. 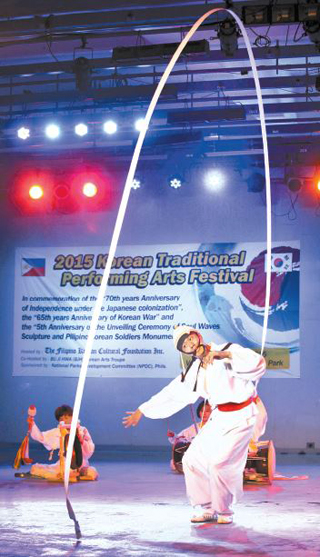 Yuk Jun-hui, who was the most popular act of the night, twirls a 12-foot-long sangmo, or ribboned hat.

Next came a pungmul performance, a folk tradition that involves drumming, dancing and singing. Then the festival closed with a final samulnori or percussion performance by the NO-RI Art Troupe. The performers and students became one in this emotionally climactic act.

The head of the school, Gertrudes U. Dayag, who attended the festival, said, “Students can only get a glimpse of foreign culture through YouTube videos. We are so grateful that these performers came and prepared a show right at our school. I couldn’t be any happier for the big gift they’ve bestowed upon these adolescents.”

The Sisters of Mary Girlstown, where the festival took place, is a four-year middle and high school founded in 1985 by the American priest Father Aloysius Schwartz (1930-1992). An educational institution that also provides on-the-job training, Girlstown serves students from impoverished families. In their last year at the school, students receive professional training so that they can go on to lead successful professional lives.

Father Schwartz served as a missionary in Busan in the tumultuous days that followed the Korean War (1950-53). In 1969, he built homes for war orphans who were starving in the streets. He then went to the Philippines where he built a house for orphans, and later with a similar intent established Girlstowns and Boystowns. For his contributions, in 1983 he received the Ramon Magsaysay Award, named after the former Philippine president.

With its connection to Father Schwartz, the Girlstown is primarily operated by Korean nuns. Thanks to these nuns, the school has been visited by traditional Korean performance art companies many times over the past decade. The first performance took place in 2003, when the head of the Korean Traditional Dancing School, Lim Yi-jo (1950-2013), and Yumin event planning representative Kang Hyun-jun visited the school.

Legendary artists who have participated in the benefit concert over the years include Korean traditional dance master Lee Mae-bang (1927-2015) and folk singer Lee Chun-hee. Although K-pop may be leading the Korean Wave in Southeast Asia, the participants in the festival are eager to experience authentic Korean traditional culture.

“From its pilot year to now we performed at Girlstown all 14 times, and we intend to continue this annual benefit performance,” said Kang, who has led the Bujiwa arts company and has continuously participated in performances that promote Korean traditional culture.

“More than anything, it is most satisfying to see students’ happiness after the performance,” he added.