Electronic firms can save on logistics

Electronic firms can save on logistics 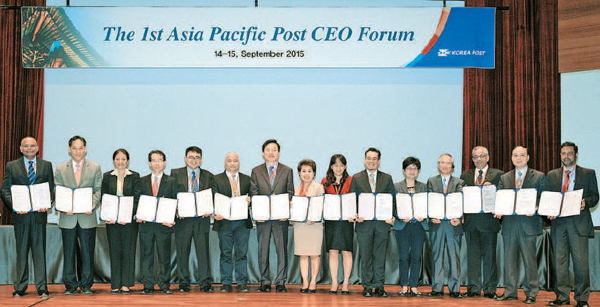 Companies that specialize in electronic trades will be able to save as much as 30 percent on their logistic costs thanks to an agreement signed by 17 countries including Korea, China and Japan during the first Asia Pacific Post CEO forum held in Korea.

The two-day forum that started on Monday was held at Korea Post. According to the Korean postal service, the CEOs of postal companies on Tuesday agreed to start a service called APP (Asia Pacific Post)-ePacket.

The APP-ePacket allows the electronics trading companies to send packages that are 2 kilogram or less to the 17 countries at 30 percent cheaper than the current express mail service.

The service will be launched in Australia and Hong Kong in the second half of the year as a trial.

Companies that wish to use the service will sign a separate contract with the postal service.

APP is an organization of postal services established in 1995 to enhance cooperation between the member countries while improving efficiency. It currently has 27 member countries.

“Through this forum we expect a huge change where postal offices in the Asia-Pacific region rediscover their role and value in society, while coming up with a management strategy for the future,” said Kim Kee-deok, Korea Post President.