Man trashes his Benz in unique form of feedback

Man trashes his Benz in unique form of feedback 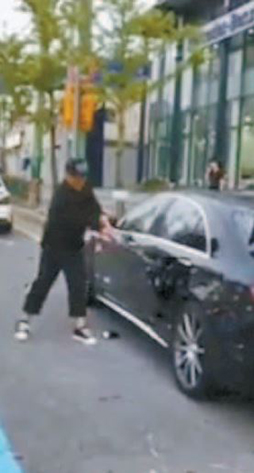 A Mercedes-Benz S63 AMG leaser smashes his own car near a dealership in Gwangju on Friday in protest of the company’s poor after-sales service. Image captured from YouTube

Mercedes-Benz Korea came under fire after a driver of one of its luxury vehicles, dissatisfied with the company’s after-sales service, posted a video online of himself giving the car a violent going-over with a golf club.

The video was uploaded to YouTube on Friday, the same day that the company opened a 25 billion won ($21 million) staff training center
developed to improve its customer
service.

According to Seobu Precinct Police in Gwangju on Tuesday, a leaser of a Benz S63 AMG, surnamed Yoo, was booked on Monday without detention on a charge of obstructing a business. The police said the 33-year-old driver of the 209 million won luxury sedan parked it near the entrance to a Benz dealership and smashed its windshield and doors a dozen times with a golf club.

Yoo then posted a video clip of the assault on YouTube.

The police said the business obstruction charge was applied because Yoo left the car near the dealership for 17 hours.

Yoo told police that he leased the car in March and customized the soundproofing and exhaust systems.

But the car’s engine suddenly stopped working on three separate occasions while driving, including on an overpass on Sept. 9 with his pregnant wife and 5-year-old son in the car.

Yoo found a clause in his contract that guarantees a car owner will get a refund or a replacement vehicle if the same problem is found three times with a part. But according to Yoo, the Benz dealership wouldn’t cooperate.

“They kept saying I had to wait until the CEO of the shop came back from a business trip again and again,” Yoo was quoted as saying by the
police.

As the story spread via the Internet, Mercedes-Benz Korea released a statement Monday evening that read, “We found that parts of the car were customized when the owner brought the vehicle for maintenance the second time on July 27. In order to find the exact cause of the problem, we asked the owner to restore the car as it was originally, but parts of the [restoration] weren’t completed. When the customer visited the shop on Sept. 11 for the third time, we explained that the car needs to be checked, but we couldn’t inspect the car on that day.”

Yoo argues that the customized parts were fully restored.

On Friday, Mercedes-Benz Korea opened a training center in Yongin, Gyeonggi, to improve its overall customer service quality, the first center developed in Asia and the third in the world after Germany and France. Its goal is to train 12,000 staff in after-sales service every year.