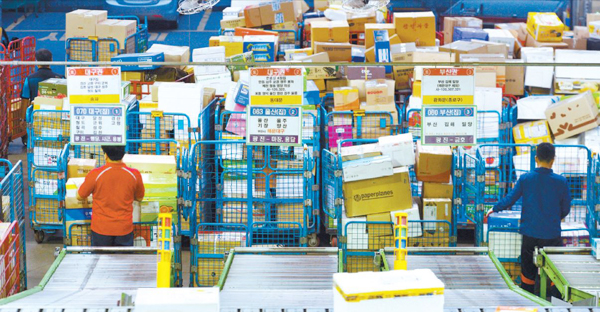 Retailers are poised to take advantage of the Chuseok holiday to help them recover from slow sales at the beginning of the year due to the outbreak of Middle East respiratory syndrome (MERS) and sluggish consumer confidence.

As the government designated special sales promotion weeks from Sept. 14 through Oct. 14, more than 3,000 retailers, including department stores, discount chains and fishing and agricultural producers, will be involved in sales events. Items will be marked down as much as 60 percent.

The event will unfold in two phases before and after the Chuseok holiday that falls on Sept. 27.

Over 2,000 farming and fishing cooperatives and open-air traditional markets will offer agricultural produce at discounted prices from Sept. 14 to 25.

While the products of the pre-holiday event will consist of groceries and food items that attract high demand for the Chuseok holiday, the post-holiday phase running from Oct. 1 to 14 will sell a broader range of items from clothes to cosmetics.

Sponsored by multiple government entities and retailers, about 30,000 stores offer discounts, lucky draws, treats and other rewards across the nation.

As well as the participants, farming cooperatives will get an opportunity to join the event.

The sales event period was extended this year. From 2011 to 2013, the Korea Grand Sale was held in January and February, but this year, organizers moved the start date to August, and it will last until Oct. 31.

This is the first time the operators have invited fishing and agricultural producers.

The announcement, made during a Cabinet meeting, is the latest in a string of government efforts to stimulate domestic consumption.

The government announced last month that it will lift a 20 percent tax on what the government considers “luxury items,” such as jewelry, imported handbags and watches, furs, cameras and perfumes, if the price exceeds 5 million won ($4,200). Previously, the ceiling was 2 million won.

The government also said that more tax deductions will be given for use of debit cards rather than cash.

The government unveiled extended tax benefits last month to help the tourism industry, which is still reeling from the effects of MERS.

Tourists who get plastic surgery done at a hospital registered with the government between April 2016 and March 2017 can get a refund of 10 percent of the value-added tax.

Foreigners who purchase products at Korean stores can also be immediately refunded VAT at the stores. Under the previous law, tourists had to undergo the hassle of visiting counters at international airports for refunds and go through various procedures.