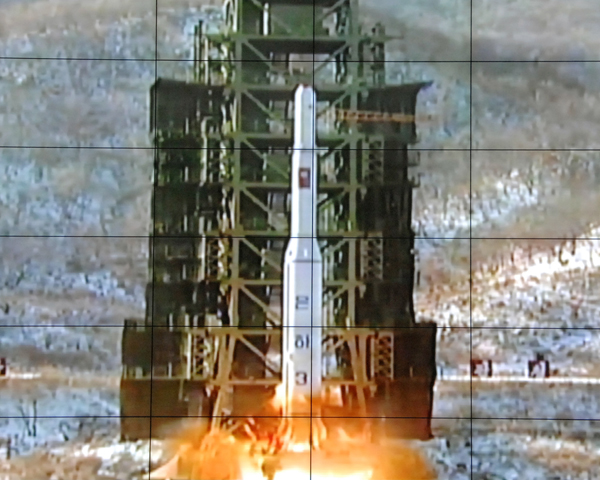 In this Dec. 12, 2012, file photo, a screen at the General Satellite Control and Command Center shows the moment North Korea’s Unha-3 rocket was launched in Pyongyang, North Korea.[AP/NEWSIS]

North Korea said on Tuesday that it has restarted all atomic fuel programs at its main nuclear complex, hours after announcing its intention to fire a long-range missile, possibly within the next few weeks.

A senior nuclear official in Pyongyang said the country’s plutonium and highly enriched uranium facilities at the Yongbyon complex had been “rearranged, changed or readjusted, and they started normal operation.” The comment by the director of the Atomic Energy Institute was carried by the North’s state-run Korean Central News Agency Tuesday afternoon.

In the report, the unnamed official said all nuclear facilities in Yongbyon, including the “uranium enrichment plant and five-megawatt reactor,” were revamped and their operations resumed. The country has steadily improved both the size and quality of its nuclear programs, the official also said.

Located about 100 kilometers (62 miles) north of Pyongyang, the Yongbyon Nuclear Scientific Research Center is the North’s largest atomic facility. The five-megawatt reactor, capable of producing weapons-grade plutonium, is believed to have provided the North with atomic materials for the country’s first nuclear test in 2006.

The Kim Jong-un regime also said it will cope with hostility by the United States with “nuclear weapons any time.”

The comment fueled speculation that the North may conduct yet another nuclear test. In the Korean language statement, the North said it will respond to U.S. hostility with “nuclear thunder,” a term used to describe the North’s third nuclear test in February 2013.

The announcement about the resumed nuclear activities came only hours after Pyongyang’s threat to launch a long-range missile. On Monday night, a director from the North’s National Aerospace Development Administration said the country is ready to launch “satellites.”

While the North insists its satellite launches are for a peaceful space program, the international community considers them attempts to develop long-range missiles. A North Korean intercontinental ballistic missile armed with an atomic bomb is one of the worst security fears for the United States.

The North also hinted that the launch will mark the 70th anniversary of the founding of the country’s ruling party on Oct. 10. The world will “clearly see a series of satellites soaring into the sky at times and locations determined’’ by the Workers’ Party, it said.

The North’s last firing of a long-range rocket took place in December 2012, when it successfully put an object into orbit. Two months later, it conducted the third - and so far, the last - nuclear test, prompting the international community to respond with bolstered UN sanctions.

South Korea warned the North to stop any provocative actions, by which it means attacks or tests of possible offensive weapons. President Park Geun-hye discussed the latest security threats by the North in a meeting with the European Union’s leaders, including Donald Tusk, president of the European Council, at the Blue House on Tuesday.

The leaders condemned the North’s “continued development of its nuclear and ballistic missile programs, including its plutonium and uranium enrichment program and ballistic missile launches,” said a joint statement issued after the summit. They also called on the North to “cease all related activities immediately as required by the relevant UN Security Council resolutions.”

“We call on the [North] to fully comply with its obligations under the relevant UN Security Council resolutions and to refrain from any further provocation,” it said, adding that they urged Pyongyang to respond to diplomatic efforts to resume suspended six-party nuclear talks.

Earlier in the morning, a Blue House official said the North will gain nothing from provocations.

The Ministry of Foreign Affairs and Ministry of National Defense said Tuesday that no sign was detected to indicate the North was close to firing a missile.

“Korea and the United States are closely working together to counter all situations concerning the North’s long-range missiles,” Noh Kwang-il, spokesman for the Foreign Ministry, said Tuesday during a regular press briefing.

He said a missile launch is a serious provocation and a military threat. It is also a clear violation of the United Nations Security Council resolution that banned all activities using ballistic missile technology, he said.

“We will focus on diplomatic efforts to stop the North from firing a missile,” he said, adding that Seoul will closely cooperate with concerned countries, including the members of the Security Council, to counter a strategic provocation by the North.

A senior government official said the North will unlikely act immediately because the threats were issued by officials in charge of nuclear and missile programs, rather than the National Defense Commission headed by Kim or the Foreign Ministry.

“The North appeared to be using various cards ahead of the Workers’ Party anniversary and family reunions,” he said. “We must not jump to a conclusion and assess the situation more comprehensively.”

Concerns grew in Seoul that the North’s brinkmanship with its nuclear and missile programs could throw cold water on the latest reconciliatory effort by the two Koreas. Military tensions escalated to a new peak after two South Korean soldiers were injured by land mines planted by the North inside the demilitarized zone, but Seoul and Pyongyang managed to ease animosities through marathon negotiations by top security officials.

An Aug. 25 agreement included a plan to hold reunions of families separated by the 1950-53 Korean War, and the events are scheduled to take place at the Mount Kumgang resort in the North from Oct. 20 to 26.

Despite Pyongyang’s threats, the two Koreas continued to plan the reunions as scheduled. Red Cross representatives of the two Koreas exchanged lists of the aged citizens who would meet with their long-lost relatives on Tuesday.

The exchange was made at the truce village of Panmunjom on the inter-Korean border. The South provided the North with a list of 250 people and the North gave a list of 200.

Earlier on Tuesday, President Park stressed her determination to push forward with the reunions, even in the face of a provocation.

During a Cabinet meeting, Park said the two Koreas must work together to find a fundamental solution to the separated family issue. She also urged the concerned ministries to do their best in not only Red Cross talks but also government-to-government negotiations between the two Koreas.

The North’s nuclear and missile threats came as its neighbors pressured the communist regime’s young ruler to stop his brinkmanship.

President Park and Chinese President Xi Jinping held a summit in Beijing on Sept. 2 and pressed the North to abandon its nuclear arms and stop provocative actions, such as nuclear and missile tests.

“The two sides stressed that the Sept. 19 Joint Declaration of the six-party talks and resolutions of the United Nations Security Council must be implemented fully,” the Blue House said. “They also expressed the stances that they oppose any action that escalates tensions in that regard.”

The joint declaration, agreed during the now-stalled six-nation talks in 2005, said the North will dismantle all its nuclear weapons facilities and return to the nuclear non-proliferation treaty and international nuclear oversight. UN sanctions were imposed over the years after three nuclear tests by Pyongyang and a series of long-range missile tests.

It was the first time that presidents of South Korea and China issued a coordinated warning in advance of a North Korean provocation. If the Kim regime decided to carry out a nuclear test or missile firing, it will put a
serious damper on the already strained alliance between Pyongyang and
Beijing.

The North’s threats were also made ahead of significant diplomatic events later this month.

Park is also expected to attend, although the Blue House has not announced her schedule. She attended last year’s UN General Assembly and gave a keynote speech on the first day.

North Korea will send Foreign Minister Ri Su-yong to the assembly. Ri attended the conference last year and argued that Pyongyang has no choice but to pursue nuclear programs as a deterrent against U.S. hostility.

“The North’s so-called satellite launch will lead to more sanctions by the UN Security Council, and then the North will likely conduct a fourth nuclear test to resist it,” Cheong Seong-chang, a senior research fellow at the Sejong Institute, told the JoongAng Ilbo.

“Then, the North’s nuclear capabilities will advance further, and the security of the Korean Peninsula will be threatened.

“The government must not sit with folded arms,” he said. “It must propose emergency contact with top North Korean officials and persuade the North to give up its missile launch in October.”

He said the South can use the resumption of Mount Kumgang tours and the lifting of 2010 economic sanctions as a bargaining chip in negotiations to deter the North.