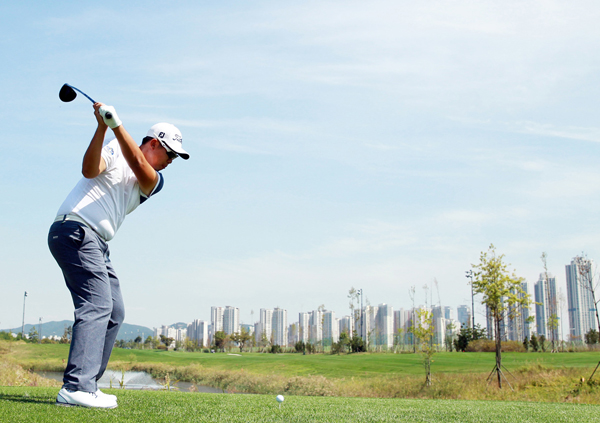 An Byeong-hun was born to compete. After all, his parents are Ahn Jae-hyung and Jiao Zhimin, both of whom medaled in table tennis at the 1988 Summer Olympics in Seoul.

The younger An, however, opted for golf clubs over a paddle, and it’s gone well so far - he’s currently the highest-ranked Korean male golfer in the world, at No. 56.

“My ultimate goal is to win the Masters and become world’s top-ranked golfer,” An said.

An, who turns 24 today, returned to Korea on Monday to compete in the 31st Shinhan Donghae Open, held at Bear’s Best Cheongna Golf Club in Incheon starting today. This will be the first time since the 2012 Ballantine’s Championship that An will play in front of Korean fans.

In fact, this is only the third time that An has played a KPGA Tour event. His first was the 2009 Korea Open.

An may not have much experience on Korean courses, but he’s confident in his abilities. After all, he’s the youngest U.S. Amateur champion in history, taking the trophy in 2009, and already has a major title in the European Tour, winning the BMW Championship in May.

An’s father believes that his
son could become the best in the world because of his dedication to success.

“His desire to win is stronger than his parents’,” Ahn Jae-hyung said. “It’s worth mentioning that he always gives 200 percent.”

Some athletes might feel pressure if their parents are Olympic medalists, but An says he’s not bothered because golf and table tennis are different sports.

“I can accept the comparison [with my parents], but I don’t feel like I need to be better than them,” An said. “My father and mother are not obstacles that I have to overcome. In fact, they have always been my heroes. However, in order
to become better-known than my parents, I need to win the major tournament.”

When An won the 2009 U.S. Amateur, he received a lot of attention because of his family background. Speaking three languages didn’t hurt either.

“When I’m with my father, I speak Korean, and when I talk with my mother, I speak Chinese,” said An, who moved to the United States in 2005 to attend David Leadbetter Golf Academy in Florida. “Sometimes, event organizers ask me to have an English interview first, and then have separate Korean and Chinese interviews.”

Maybe because of his parents, An first showed talent in table tennis, but he wasn’t able to go very far because he had slow feet. That doesn’t pose a problem in golf, but both sports do require players to be good with their hands, which has been more of an issue for An. He’s become a top-ranked player in the European Tour because of his long drives, but his putts can be shaky.

“Looking back, I think playing golf suits my body,” he said. “Sometimes, my putts can be uneven, which is something I need to improve.”

An said that he will play at least seven more events in the European Tour as well as the Race to Dubai this year. He will not be featured in the President’s Cup next month in Incheon, despite having the highest ranking among Koreans, because compatriot Bae Sang-moon was chosen over him.

For the Shinhan Donghae Open this week, An will have to compete against the nation’s top golfers, including those already playing in the PGA Tour. The winner of the event will collect 200 million won ($170,000) from a 1 billion won purse, in addition to a five-year Tour card.

“It feels different that I will be playing in front of local fans after a long absence,” An said. “Unlike in the past, I want to display a more mature game.”

An is paired with Kim Kyung-tae and Park Sang-hyun in the first round.

Kim, who is the prize money leader in the Japan Golf Tour Organization (JGTO) with three wins this season, is looking for his first KPGA Tour victory in four years. The 29-year-old, who was the top prize money earner in the KPGA Tour in 2007, tied for 14th in last week’s Kolon Korea Open.

Noh Seung-yul, who is the youngest Korean to win a PGA Tour event after taking the 2014 Zurich Classic of New Orleans, is also playing in Korea for the first time this season. The 24-year-old, who was the youngest prize money champion in the Asian Tour in 2010, has yet to win a KPGA Tour event.

Noh is in same group with Kang Sung-hoon and Lee Su-min.

Kang earned a full season PGA Tour card for next year after finishing 22nd in the second division Web.com Tour this season. The Shinhan Donghae Open will be his third Korean event this season. In two previous local events, the GS Caltex Maekyung Open and SK Telecom Open, he tied for eighth.

Tour rookie Lee is the winner of the Gunsan CC Open and is hoping to become the top prize money earner in this KPGA Tour this season. The current leader, Lee Kyoung-hoon, the winner of last week’s Kolon Korea Open, opted to pass on this tournament to play in a JGTO event.

Kim Meen-whee, the PGA Tour rookie who completed his first season at No. 123 in prize money standings, is also eyeing the title, which he won in 2012. The 23-year-old will tee off with the 2013 KPGA Tour Rookie of the Year Song Young-han and Kim Seung-hyuk, the top earner in 2014.

JTBC Golf, a broadcasting affiliate of the Korea JoongAng Daily, will broadcast the event live beginning at 12 p.m. for the first two rounds and from 11 a.m. for the third and fourth rounds.