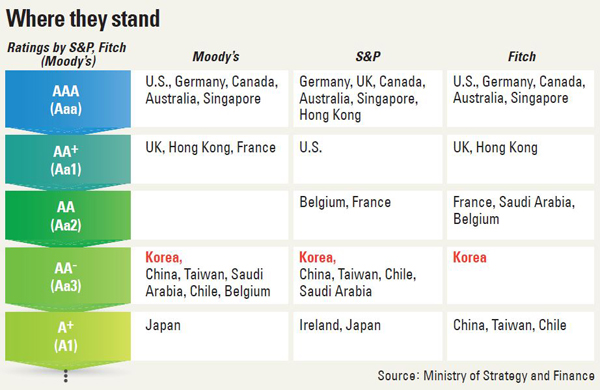 A day after Standard & Poor’s raised Korea’s credit rating to its highest level in 18 years, the benchmark Kospi rose nearly 2 percent, while the won appreciated.

In addition, foreign investors started buying Korean stock again, a turnaround from 29 days of net selling. If foreigners had continued to sell for another week, it would have broken the previous record of 36 consecutive days set in July 2008.

The improvement in Korea’s sovereign credit rating by S&P on Tuesday ahead of a closely watched U.S. central bank decision was undeniably good news for the Korean government and its economy.

Japan, on the other hand, saw its rating cut one level down to A+ by the same agency on Wednesday. S&P said in a statement that it thinks so-called Abenomics will unlikely “reverse” the deterioration of the Japanese economy in the next couple of years.

It added that declining external debt owed by Korean banks and smaller short-term borrowing played a major factor in its decision.

The higher credit rating is a milestone for Korea, especially since it took nearly two decades for Korea to recover its AA- title. In May 1995, S&P raised Korea’s sovereign rating to AA-, but in December 1997, Korea’s credit rating plunged 10 levels down to BBB+ after it was struck by the financial crisis washing over most developing countries in Asia.

Since then, Korea’s credit level lingered in the B levels. It took nearly five years to regain its honor as an A-level country, when its rating was raised from BBB+ to A- on July 24, 2002.

Among the three North Asian countries - Korea, Japan and China - Korea is the only country whose credit rating is at AA- (Aa3 for Moody’s) by all three major credit rating agencies: Moody’s, S&P and Fitch. The two other agencies already gave double-A ratings to Korea. Fitch was the first, giving AA- on Sept. 6, 2012, with an outlook of “stable.” Moody’s upgraded the rating to Aa3, the same level as the AA- of the other two agencies, on April 10.

Since 2014, Korea is the only country to have its rating upgraded to AA- or more by S&P, the Ministry of Strategy and Finance said.

Among the G-20 countries, Korea is among eight with AA- or higher credit ratings. The others are the U.S., Germany, Canada, Australia, UK, France and Saudi Arabia.

But despite the good news, the biggest question is how much influence the higher credit rating will have on the Korean economy.

Market analysts say S&P’s move won’t have that much impact on the market because it came after Fitch and other credit rating agencies.

“The credit rating improvement will definitely have a positive affect in regards to differentiating Korea from other emerging markets with troubles, such as the slowing Chinese economy,” said John Kim, an IBK strategist. “It will also help cut costs for Korean financial institutions and public companies in their overseas debt. But as the hike was already expected, it wouldn’t have much influence in the market.”

“As the two other agencies already raised their ratings, the impact of the S&P rating was not that significant,” Hong said.