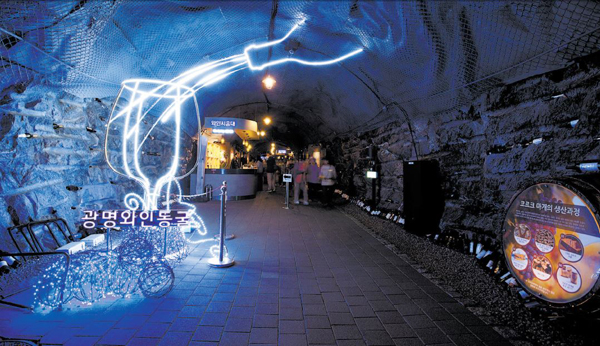 Gwangyeong Cave, a former mine that was abandoned for 40 years until 2011, has recently been transformed into a wine-themed attraction featuring locally made wines. [Joongang Ilbo]

While many of the wineries throughout Korea are easily identified by the sweet smell of ripe grapes emanating from the nearby vineyards, there is one cave in Gwangmyeong, Gyeonggi, far away from any vineyard, that strangely has a similar smell.

Gwangmyeong Cave, which used to be a mine, has been transformed to a gigantic wine cellar. The large underground structure provides a natural storage space for wine with adequate temperature and humidity levels. The city of Gwangmyeong, which doesn’t produce wine itself, has turned the cave into a sort of wine museum displaying scores of different wines so local residents can taste the locally made vintages and learn more about the industry.

The cave, which was previously called Gahak Cave, was used as a mine for 60 years beginning in 1912. The gold, silver, bronze and zinc excavated from the cave by hundreds of miners were all sent to Japan to be made into weapons used in the Pacific War. After Korea’s liberation from Japanese colonial rule in 1945, the metals excavated from the mine were used to support the industrialization of Korea, but the mine was abandoned and forgotten for about 40 years after it was shut down in 1972.

The city government breathed new life into the abandoned space in 2011. The cave-turned-wine cellar was open to the public for free for three years, and one million people visited up until 2014. Once the city realized the possibility of the cave becoming a local tourism hot spot, it decided to renovate it into a theme park. Despite the fact that the park now charges an entrance fee, 660,000 people have visited the park since the reopening in April. 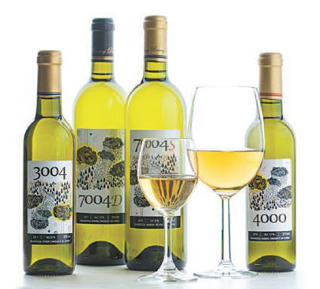 The cave, once considered too dark and secluded to be of any use, has now become an attractive travel destination due to these attributes. The long, dark cave is now illuminated by tens of thousands of LED lights, and at the end of the deep tunnel, countless wines are stored.

The cave is a perfect place to store wine because it completely blocks the sunlight and maintains a stable temperature and humidity.

“Generally it is good to store wine at a temperature of 12 to 14 degrees Celsius [54 to 57 degrees Fahrenheit] and 65 to 85 percent humidity,” said sommelier Choi Jeong-wook, specially hired by the city government to design the wine cave.

“We don’t really impose any man-made controls here, but only check if there are any [unexpected] drastic changes.”

Upon entering the wine cellar which is about 200 meters long, a visitor’s nose can detect the wine long before it comes into view. There are 94 different wines stored in the cave from 25 Korean wineries, which are spread across 18 cities. Visitors can even taste a few of the wines.

When this reporter visited, the group was served a wine made from geobong (Kyoho grapes), which are larger than typical grapes. The color of the wine is light red, and the taste isn’t as sweet as one might expect, but rather quite strong.

“Because there’s some danger of people tripping, we only serve a little,” said an official inside the cave. Visitors who aren’t expecting to receive a free tasting enjoy the surprise.

Some visitors observed that the wine isn’t as bitter as they had expected, and others remarked that Korean wine is quite tasty. Since a bottle of wine costs between 10,000 won and 20,000 won ($8.50 to $17) - an affordable price - some visitors buy one or two bottles to take home. The theme park has sold about 20,000 bottles since it opened five months ago.

“Because the visitors to this cave are mostly the general public, not the wine connoisseurs, sweeter wines sell better than drier red wines,” said sommelier Choi. 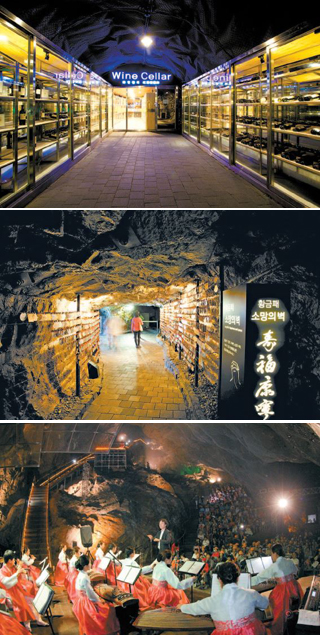 Top: Inside the wine cave, there are 228 cellars, each of which can store up to 25 bottles of wine. Middle: Visitors to Gwangmyeong Cave can write down their wishes and leave them on a wall of the cave. Bottom: A musical performance is held inside the cave to entertain visitors.

The strength of this particular wine cave comes from the fact that it has gathered many different wines from different regions in one place. There are some smaller wine caves scattered across the country specializing in specific regions, but these fail to attract many visitors from the Seoul metropolitan area due to their distance from the city. Also, even when a particular Korean winery produces a great wine, it is difficult for Seoulites to find a retailer nearby that sells the wine so they can try it, short of visiting the winery in person.

After reopening the wine cave, Gwangmyeong decided to hold more events at the cave to help spread the word. For instance, the “Gwangmyeong Cave Korea Wine Festival” took place at the end of last month. Forty judges including both experts and laymen tasted 62 different Korean wines and gave out scores during the festival.

“We hope that this place will become a hot spot where many can experience some new wine,” said Yang Ki-dae, mayor of Gwangmyeong.

“From now on, we’ll make the cave the mecca of Korean wines, and we will contribute in stimulating the local economy and supporting local farms.”

Yeopo Farm was one of the first-place winners at the recent festival, taking the prize with its white wine. Yeo In-seong, CEO of the farm, was grateful for the chance to introduce his wine to a larger group of people.

“We have seen many ups and downs regarding the sale, because all the sales we have seen are from those who buy wine when there is a wine festival in Yeongdong from time to time, so we have been worrying a lot about developing a sales route,” he said.

“But as we now, along with three or four other wineries in Yeongdong that sell products to Gwangmyeong Cave, our sales have been stabilized as we are seeing a steady increase of sales.”

Not all the wines featured at the wine cave are made from grapes. Some of the bottled alcoholic beverages are made from other fruits, such as apples, kiwi and omija, a type of red berry.

One of the best-selling products is an apple wine made in Yeocheon, North Gyeongsang. The sweetness from the fruit is maintained in the wine, so it is perfect when consumed as a dessert. CEO Jeong Je-min of Yesan Apple Wine said sweeter-tasting wine are better-accepted by the general public.

“We sell 1,000 bottles through Gwangmyeong Cave a month, while we only sell 10 to 20 bottles at a department store after going through a fierce competition to get a retail spot there,” he said.

Wine made from chamdarae, a type of kiwi, is also popular along with wine made from omija. Omy Rose Premier from Mungyeong, North Gyeongsang, was also honored at the recent wine festival at the cave. This omija wine has often been used as an official drink for large international events held in Korea including the 7th World Water Forum that took place in April in Daegu.

The city plans to continue developing more ideas so that the Gwangmyeong Cave can continue its rise as a local wine hub. For individuals who want to store their own wines there, the city plans to allot 228 wine cellars, each of which can store 25 bottles. If one pays an annual membership fee, ranging from 200,000 to 500,000 won, one will not only be able to store wines but also dine at a wine restaurant inside the cave, which is scheduled to start taking reservations next month.