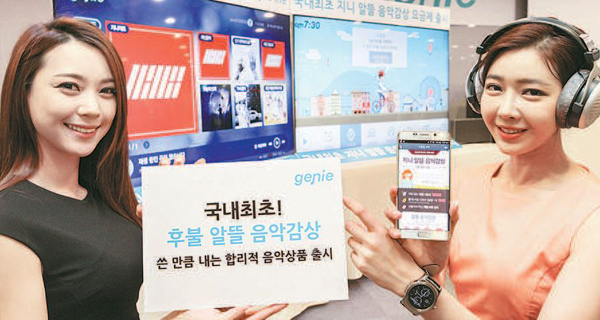 KT Music launched new features for its music service, Genie, on Wednesday at KT’s headquarters in central Seoul. Provided by the company

Korean music lovers are being offered a better deal to stream their favorite songs.

Genie, a music streaming service operated by KT Music, is overhauling its pricing schemes. KT Music, an affiliate of telecommunications provider KT, will charge 10 won per song with a monthly base fee of 100 won.

Previously, music lovers in Korea had to pay a set monthly payment in advance of about 6,000 won ($5) for unlimited streaming access.

“With the new pricing, we believe that it can bring in consumers who stayed away from paid music services due to financial burdens,” said Kim Sung-wook, CEO of KT Music.

He expected the scheme to attract some two to three million new users by 2016.

“We estimate that there are some 20 to 30 million people who have never accessed the paid music service,” Kim said. “We are targeting them. If we lower barriers, I believe we can attract at least 10 percent of them.”

The mandated monthly set payment is a major obstacle that turns off new users, KT Music said based on its survey.

The current top music operator is Melon, run by Loen Entertainment, which has a majority market share.

Forty six percent of non-users said the main reason they have not subscribed to a paid service is the high base payment even though they don’t use the service frequently.

“If they are allowed to pay money per song they listen to, they feel less burdened,” Kim said.

The music retail operator also introduced a set of new features. Among them is Genie Life, which allows users to switch audio between compatible hardware, including smartphones, tablets, smart watches and other
devices.

“Users increasingly want music at different places with enhanced convenience,” said Jang Joon-young, director of KT Music. “The feature will enable users to listen to music whenever and wherever they want,”

The company will offer a list of music for different purposes and circumstances, such as the capability to select songs that go well with a heartbeat rate when a user is working out.

Genie caters to younger consumers. Those in their 20s represented 51.2 percent of downloads while people in their 30s accounted for 21 percent. People over 40 made up 19.6 percent.