Breathing life into a difficult piece

Breathing life into a difficult piece 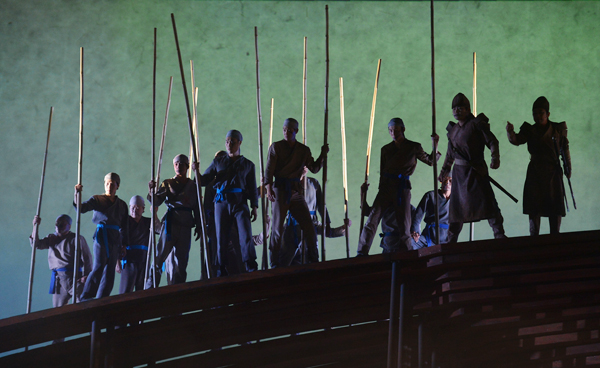 The National Changgeuk Company is staging “Jeokbyeokga” at the National Theater of Korea through Saturday. Provided by the company

The efforts made over the past several years by the National Theater of Korea and the National Changgeuk Company to reverse the reputation of changgeuk (traditional Korean opera that involves pansori, or narrative singing) as being the boring genre of traditional performing arts have been quite successful.

By inviting renowned directors of not only changgeuk but also different genres like theater and musicals, as well as selecting stories that have wide appeal, the National Changgeuk Company has been staging an unprecedented number of sell-out performances in recent years.

Riding on this success, the National Theater of Korea and the National Changgeuk Company are taking on yet another challenge, this time by presenting “Jeokbyeokga.” The piece is known for being one of the most difficult pansori of all time - difficult for both the pansori singers to perform and the audiences to watch.

“Jeokbyeokga” is one of five surviving pansori pieces available, and the changgeuk company decided to recreate them as changgeuk performances as part of its seasonal repertoire.

According to Kim Seong-nyeo, artistic director of the National Changgeuk Company, “Jeokbyeokga,” which means the “song of the red cliff” in English, has long been regarded as the “yardstick to measure the ability of pansori singers.” 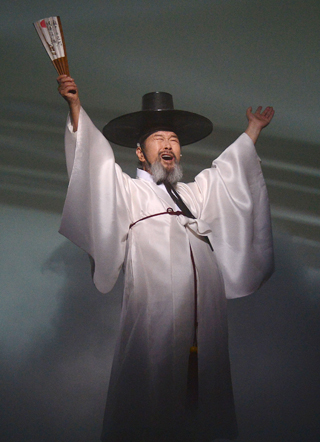 Pansori master and human cultural asset Song Sun-seop is performing “Jeokbyeokga” together with the company.

“One would ask whether the pansori singer could sing ‘Jeokbyeokga,’ and if the singer answered yes, he or she would be well cared for,” she said.

Due to its difficulty, it’s only been staged three times in Korea during the past 50 years since the establishment of the National Changgeuk Company.

Moreover, Ahn Ho-sang, director of the National Theater of Korea, expressed concern about the story of “Jeokbyeokga,” saying that the original storyline is not as appealing to young audiences as the company’s successful shows like “Janghwa and Hongryeon” and “Madam Ong.”

“I’m quite worried that it might not draw in young audiences as we did for previous sell-out performances,” Ahn said. “But I believe this performance shows the quintessence of what pansori sounds like, and I believe our audiences are up to the level to enjoy this kind of performance as well.”

However, both Ahn and Kim said they are relieved to be staging “Jeokbyeokga” under the guidance of the country’s first female opera director, Lee So-young. Despite being an expert in opera, Lee secluded herself from the country’s performing arts circle over the past four years after resigning as artistic director of the Korea National Opera in 2011. The upcoming performance will be her comeback piece and her debut as a changgeuk director.

“I heard about her interest in changgeuk many years back and tried to contact her to ask her to direct any changgeuk pieces she had in mind, but I couldn’t reach her for many years,” said Kim. “Finally after many years, I got in touch with her, and to my surprise, she wanted to try ‘Jeokbyeokga.’”

Since the story is very masculine and revolves around the Chinese historical legend of the Battle of Red Cliffs, and may involve battle scenes, Kim thought a female director would not be interested in it.

“But she told me that she was touched by pansori master Song Sun-seop’s ‘Jeokbyeokga,’ and I knew instantly that she’s the one,” Kim said. “Moreover, if we had staged ‘Jeokbyeokga’ three years ago, before we could get in touch with Lee, I don’t know if we could draw as large an audience to such a difficult changgeuk performance as we could today. I think it was perfect timing.”

The 78-year-old pansori master Song, who is a human cultural asset for his ability to perform the “Jeokbyeokga” (Important Intangible Cultural Property No. 5), will join the National Changgeuk Company’s in the “Jeokbyeokga” performance that kicked off Tuesday.