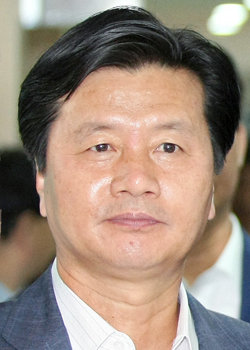 The National Assembly’s ethics committee on Wednesday unanimously passed a bill to expel Rep. Sim Hag-bong, a former member of the ruling Saenuri Party who stepped down from the party over a sex scandal.

The bill would take effect, once it is approved at the National Assembly’s plenary on Oct. 13 by two-thirds of attending lawmakers.

The bill’s passage would make Sim the first lawmaker to be expelled for an ethical breach.

On Wednesday, the 14 attending members of the Special Committee on Ethics unanimously agreed to Sim’s expulsion.

“The expulsion of a lawmaker is not a personal problem, but a more serious one, because it takes away delegate rights given by the people in his constituency,” said committee Chairman Jung Soo-sung. “We’ve voted by secret ballot and all members unanimously agreed to his expulsion.”

The Assembly’s subcommittee for punitive action also passed the bill in a unanimous vote earlier Wednesday. The decision came after the panel came under fire in July for attempting to protect a fellow lawmaker after failing to draw a conclusion.

At the time, the subcommittee’s Saenuri Party members claimed that they needed to hear Sim’s version of events before proceeding.

Scandal erupted after one of Sim’s acquaintances alleged in July that he had raped her.

Local police opened an investigation, though it fizzled out after the woman withdrew her testimony.

The first-time lawmaker stepped down from the Saenuri Party on Aug. 3, but did not resign from his seat in the National Assembly and remains an independent lawmaker.

The Daegu District Prosecutors’ Office is currently looking into whether Sim forced himself on the woman when the two met at a hotel in July and whether he forced or bribed her into changing her testimony.