Flowers bring joy in a life marked by hardship

Flowers bring joy in a life marked by hardship 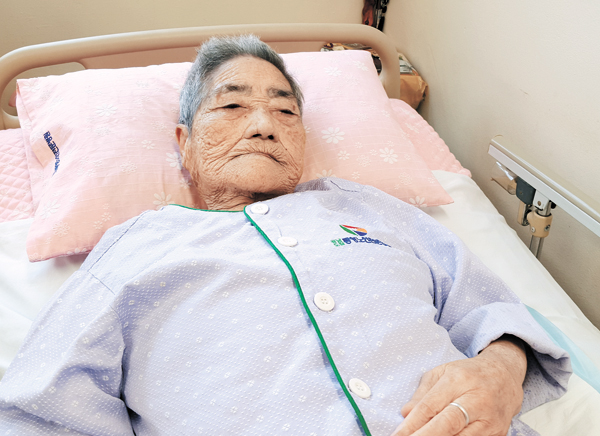 Kim Bok-deuk, at 97, is the oldest surviving Korean woman who survived sexual enslavement by the Japanese military during World War II. She receives treatment at a hospital for seniors in her hometown of Tongyeong, South Gyeongsang, and treasures most the flowers by her bedside. By Yun Jung-min

The JoongAng Ilbo collected the oral histories of 13 survivors of sexual slavery during World War II over the past weeks. As all the women are in their 80s or 90s, this may be their last record of their personal stories. The series marks the 70th anniversary of Korean liberation from colonial rule and the JoongAng Ilbo’s 50th anniversary. This is the 11th in the series.

“We have to receive an apology, so that I can finally die,” says 97-year-old Kim Bok-deuk, the oldest Korean victim to have survived sexual enslavement by the Japanese military during World War II.

Lying in bed in a hospital for the elderly in Tongyeong, South Gyeongsang, it takes all the strength she has to speak to a JoongAng Ilbo reporter.

“We have to receive an apology from Japan,” she continues, emphasizing her words.

Kim is just one of the tens of thousands of women who were forced into sexual slavery by the Imperial Japanese Army during its colonial rule (1910-45) over the Korean Peninsula.

However, the Japanese government has yet to issue an official apology or compensate the victims.

Kim was the eldest of three siblings. After her father passed away, leaving behind her mother and two siblings, she acted as head of the household at just 12 years old.

At 20 years, she was taken to a Japanese military brothel.

At that time, she worked at a factory that produced fishnets, where a Japanese man she met there promised he would find her employment in another factory where she could “earn a lot of money.” Believing him, she left her hometown of Tongyeong and headed to Busan.

However, the factory job was a lie and she was put on a boat and taken amid a raging war to Dalian in China’s Liaoning Province.

There, she was stripped of her given name, instead called “Fumiko,” and forced to serve as a “comfort woman” for the Japanese Army.

She recalls going into the ocean, and contemplated drowning herself, but the memory of her mother back home prevented her from suicide.

After three long years, she was then taken to the Philippines, and for seven hellish years she was used as a sex slave for the military.

Finally, after Korea was liberated in 1945, Kim barely managed to return to Tongyeong.

The life that awaited her, however, was just as cruel. Her mother had already passed away.

So she went to live with a man from her hometown who was 15 years her senior, but he was an alcoholic and violent. While living with him, she endured miscarriages.

In an entry in her diary about that time, she wrote, “It was not a household that I looked forward to in the first place, and it was agonizing and dreadfully difficult.”

A few years later, the 1950-53 Korean War broke out, this time a conflict between her own people. Kim made meals for those with an allegiance for the North, took refuge and did all she could to survive. But she no longer hid or tried to escape.

In 1994, she registered with the Korean government as a former comfort woman and became a regular in the weekly Wednesday rallies demanding an apology and compensation from the Japanese government.

The Korean Council for the Women Drafted for Military Sexual Slavery by Japan has held weekly Wednesday rallies demanding a resolution to the issue since January 1992, usually in front of the Japanese Embassy in central Seoul.

She has actively taken part in any events in which she can share her story and has also worked to help others in need.

She saved the money selling vegetables she had grown all her life as well as from the subsidies she received from the Korean government as a comfort women victim.

In 2012, she donated another 20 million won to the construction of the Historical Museum of Sexual Slavery by the Japanese Military. But after decades of moving forward, Kim’s health eventually took a turn for the worse and daily functions became difficult.

Her younger brother, her last remaining bloodline, passed away several years ago, as well as her fellow survivors from the Tongyeong region.

She now yearns for company. “Bring my hearing aid,” she says whenever anyone visits her.

But even with the device, it is difficult for her to lead a normal conversation.

She mostly spends her days lying in bed, though the one thing that gives her solace is the colorful flower arrangement by her bedside.

Kim has always liked flowers and loved to grow plants. And even when she entered the hospital, she brought her flowers along.

She dreams that if she were to be born again as a woman, she would become a mother and have a family as beautiful as a flower.

However, she has another dream that must be achieved before then: an apology from the Japanese government and a complete resolution to the comfort women issue.

“If they just apologize,” Kim says in a weak voice, “I will close my eyes in peace.”