Comedian hits the stage in his latest challenge

Comedian hits the stage in his latest challenge 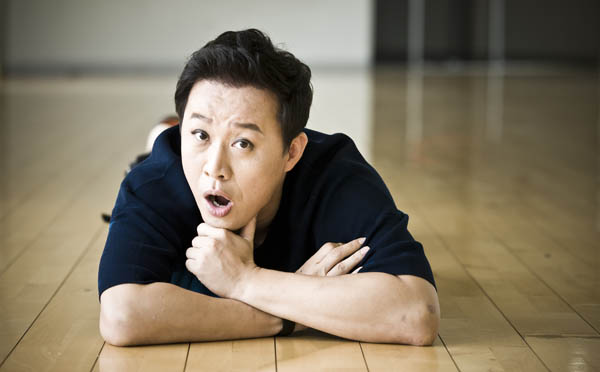 Comedian Jung Jun-ha is taking to the stage to perform live in the musical “Brothers Were Brave” for the second time, expanding his repertoire from the world of pre-recorded TV shows.

The comedian plays a lead character named Seok-bong, a son who, for the first time in three years, comes back home upon hearing of his father’s death. He gets into a competition with his brother, Ju-bong, for control over the inheritance, but while they search every corner of their father’s house, they find more and more traces of the father’s love toward his sons.

It is Jung’s second time playing the same role in this musical, which is currently on its seventh run since it first debuted in 2008. The performance will continue until Nov. 8 at Hongik Daehangno Art Center in central Seoul.

Even after Jung injured his right knee while rehearsing and ended up tearing a ligament, he couldn’t give up being on stage. The doctor recommended that he wear a cast, but Jung insisted on performing while wearing only a knee protector. 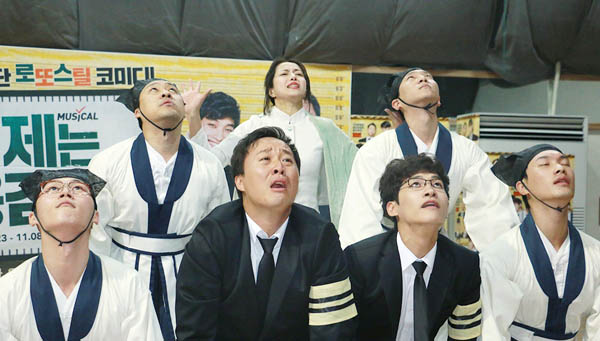 Comedian Jung Jun-ha, second from the left in front, performs in the musical “Brothers Were Brave.” [JoongAng Ilbo]

“It is strangely charming to get feedback in real time, after I get immersed in a role and have the audience also fall for the role I’m playing,” said Jung, explaining why he plans to continue performing live in a recent interview with the JoongAng Ilbo last week.

Even though Jung is already familiar with the storyline, he says he still gets tears in his eyes during rehearsals and performances when he hears the lyrics sung by the father character in the musical. The father compliments his sons for being smart and kind, and the scene reminds Jung of his own family.

“My mom came to see me perform on the first day of the performance last month,” Jung said. “She didn’t say a word to me about her visiting and bought a ticket on her own and just left. And again, she told me I did well, as always.”

He was once a troublemaker with his parents and recalled that he disappointed his parents a lot when he gave up getting into college after trying for four years.

“As I gave up on getting into college, I thought I would live my own life,” he said.

“I started working at a broadcasting station when I was 22, and I did all the mediocre work and often felt humiliated from discrimination.”

He started out as a manager for celebrities and then got a chance to make a cameo appearance on television in 1995, which led him to build a career in the entertainment industry. He rose to popularity in 2004 through the entertainment show “No Brain Survival” and also took on the challenge of doing a musical in 2006.

“Even in moments when I felt mortified, I continued to think that I was playing the leading role and people who ignored and neglected me were some entertaining extras who appeared in my life to make some fun episodes,” he said.

“I will continue to live as ‘lead character’ Jung Jun-ha, taking on challenges in different genres.”

He even forayed into hip-hop through “Infinite Challenge,” in which he is a cast regular member, and wrote a rap song with the lyrics: “Look at me taking a challenge, and I’ll be continue doing more and more.”