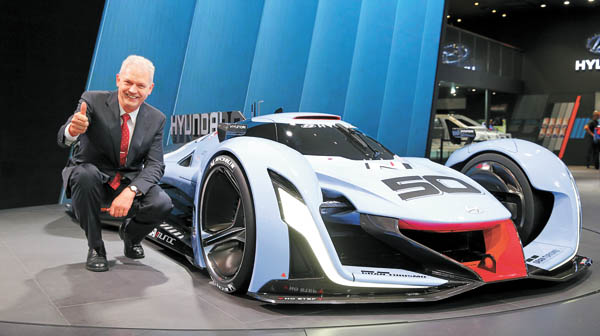 Hyundai Motor’s head of vehicle testing and high-performance development, Albert Biermann, poses with an N 2025 Vision Gran Turismo during the 2015 Frankfurt Motor Show on Tuesday in Germany. Provided by the company

Korean automakers are looking to lift their sluggish global sales as they show off their latest products at the 2015 Frankfurt Motor Show in Germany.

The show, which opened on Tuesday, is one of the world’s five big motor shows - along with Paris, Geneva, Detroit and Tokyo - that attracts more than 1,100 automakers and parts manufacturers from 39 countries. As many as 210 cars will make their debut at the show.

Korea’s leading automaker, Hyundai Motor, has revealed its plans for its high-performance brand, the “N,” for the first time. The company says it will try to provide the most thrilling, winding-road driving fun for customers who truly love cars.

The project is led by Albert Biermann who was scouted by the company’s vice chairman Chung Eui-sun, the son of Hyundai Motor Group Chairman Chung Mong-koo, earlier this year.

The former BMW executive led the development of its high-performance M series.

The “N” brand name came from the automaker’s Namyang research and development center in southern Gyeonggi and its Nurburgring high-performance test center in Germany.

“All inspirations and experiences that Hyundai Motor earned from motor sport events will make drivers feel the fun of driving, and that will lead the company to develop new cars,” Biermann said.

Hyundai unveiled the next-generation i20 WRC rally car and an N 2025 Vision Gran Turismo show car for the first time.

The company said the Gran Turismo uses a next-generation power source hydrogen fuel cell system which will provide 650 kilowatts (884 horsepower) in combination with a dual fuel-cell stack system that provides 500 kilowatts of power and the Super Capacitor, an energy regeneration system that gives 150 kilowatts of power. By using these light energy systems and a body frame with carbon fiber reinforced materials, the car only weighs 972 kilograms (1 ton).

The company also displayed the RM15 concept car, as well as the i30 Turbo, i20 Active and a new Santa Fe SUV, to boost its sales in the European market. The i20 Active is a compact utility vehicle based on its popular i20 hatchback, which was made to target European consumers last year.

The company will start selling the i20 Active next year in Europe and hopes to expand its market share along with the five-door i20 and three-door i20 coupe. Hyundai Motor will show a total of 18 models in Frankfurt.

After unveiling it in Korea earlier this week, the nation’s second-largest automaker, Kia Motors, introduced the fourth generation of the Sportage SUV to the rest of the world on Tuesday along with 18 cars, including the new K5 sedan that the company rolled out in July as part of its efforts to attract European sales.

The Sportage SUV has been one of Kia’s bestselling cars in the export market with accumulated sales of more than 3 million.

Ssangyong Motor, which is struggling overseas after losing Russia, its biggest market, due to the crushed ruble value, has pinned its hopes on its small SUV Tivoli, which became the bestselling car for the automaker since it was introduced in January in Korea.

Ssangyong said it will meet with its dealers and distributors around the world to share its vision and selling strategies for the European market. It plans to get involved in eight additional countries, including Denmark and Finland.

“We will utilize the body platform of Tivoli to expand our lineup,” said Ssangyong CEO Choi Johng-sik.

“We expect to increase our share in Europe by strengthening our lineup with the long-body edition of Tivoli in the future.”

The company aims to export more than 100,000 Tivoli units next year.

Kumho Tire will display Wattrun, a tire made exclusively for electric vehicles (EV).

With a price tag about 25 percent lower than normal tires, the company spent two years developing the product after seeing the growing demand of EVs.

Since batteries for EVs weigh about 200 kilograms, much heavier than gasoline cars, tires for EVs must be able to support the performance generated from a heavier vehicle.

Hankou Tire is also displaying three concept tires, including Boostrac, which was awarded the best concept tire in the 2015 Red Dot Award in Germany.