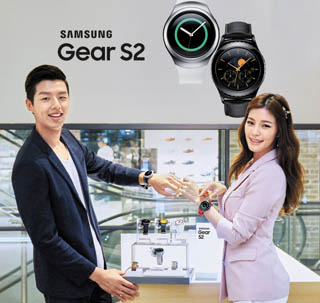 Models wearing Samsung’s latest smartwatch with a circular frame, the Gear S2, pose at the company’s store at its headquarters in Seocho District, southern Seoul. The company will accept pre-orders starting today. Provided by the company

Samsung Electronics is accepting pre-orders for its latest smartwatch, the Gear S2, starting tomorrow on its online store. They will be available for sale in stores on Oct. 2.

Samsung has big ambitions for the S2 following its launch earlier this month at the IFA consumer electronics fair in Berlin, and preorders already began in Canada. The S2 is a smartwatch with a rounded bezel that twists for navigation through menus and apps. It comes in two types: the Gear S2 Sport, with a 44-millimeter (1.73-inch) diameter screen, will cost 333,300 won ($286), while the Gear S2 Classic, with a 50-millimeter display, is priced at 374,000 won. The former has a plastic band and the latter comes with a leather strap.

The smartwatches connect to a phone via Bluetooth, but they also have built-in Wi-Fi and NFC. Another variant that works on 3G networks will be available in stores sometime in October, Samsung said.

The world’s top smartphone producer has limited the number of pre-orders to 1,000 units for the Sport and Classic models and will give a wireless charging dock to anyone who successfully places a pre-order. Samsung wants the Gear S2 to be considered more of a wristwatch, so it will display them next to ordinary watches in Lotte Department Store’s watch section. The smartwatches will also be sold at Samsung Digital Plaza outlets.

The Apple Watch Hermes, unveiled alongside the iPhone 6s, iPad Pro and Apple Pencil last week, will hit the Korean market on Oct. 5. The limited edition starting at $1,100 and topping out at $1,500 will be sold at two outlets in Seoul: the Hermes Dosan Park store and Shinsegae Boon the Shop store, both in the posh Gangnam District in southern Seoul. Other new Apple devices won’t be available in Korea for a couple of months.

The Gear S2 runs on Samsung’s own operating system, Tizen, instead of Android Wear, which most non-Apple smartwatches use. But the S2 is still compatible with almost any phone running Android version 4.4 KitKat or later.

And Samsung wants to open up its smartwatch ecosystem even more. A Samsung spokesman confirmed the company is working on opening up the wearable device to Apple’s iOS platform - an unprecedented event for Samsung. Only the Pebble Time smartwatch, made by an American company, is compatible with both Android and iOS devices.

“We are still contemplating the proper measure [to have the Gear S2 support iOS],” the spokesman said. “It could be through a software upgrade, or we could release a refreshed version.”

Samsung unveiled its first smartwatch, the Galaxy Gear, in September 2013. The platform shifted from Android to Tizen in May 2014 through a software upgrade, Samsung’s attempt to establish its own ecosystem. Tizen is based on the Linux kernel, which was jointly developed by a group of developers including Samsung, Intel, Tizen Association and Linux Foundation.

Discussing the release of smart timepieces by the smartphone archrivals, a private Korean think tank said in a report Wednesday that the key reason Samsung does not have as good an image as Apple is because it lacks a star designer like Apple’s Jonathan Ive, the chief design officer who joined Apple in 1992 and whom the late co-founder Steve Jobs considered his “spiritual partner at Apple.”

With the expansion of wearable devices, companies are increasingly coming up with products that combine fashion and high tech, the report from the KT Economics & Management Research Lab said. It referenced the collaboration between Apple and Hermes for Apple Watch Hermes and Samsung partnering with Italian designer Alessandro Mendini for exclusive accessories for its new Gear S2 as examples.

“Think of the image gap between the iPhone, designed by Jonathan Ive, and Samsung Galaxy phone, designed by an anonymous staff,” the report said. “However good a design Samsung comes up with, it could be hard for the company to obtain the luxury feel.”

It is high time that Korean smartphone manufacturers including Samsung either foster or scout globally influential designers, the report advised.