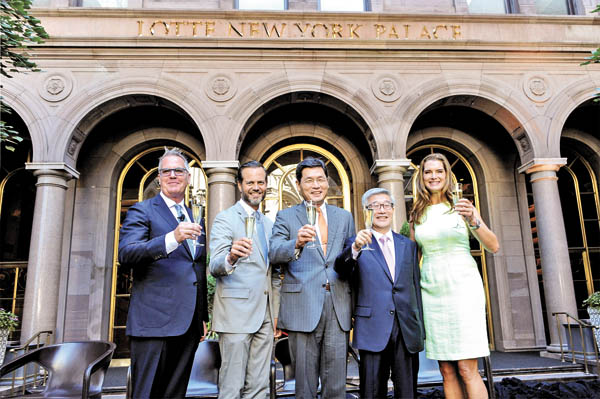 Lotte Hotels & Resorts is on the lookout for hotels in Europe and the United States to continue its global expansion, following its purchase of the New York Palace Hotel in May.

Song Yong-dok, CEO of Lotte Hotels & Resorts, said on Wednesday in New York that the hotel chain will acquire 33 more hotels outside of Korea by 2020 to become an international hotel chain with an expanded global reach.

“We are in talks with different parties for 15 potential acquisition projects and are seeking other opportunities in Manhattan.”

The CEO unveiled the plan during a ceremony to celebrate the rebranding of the hotel, where the signboard now reads Lotte New York Palace.

The move reflects the chain’s intention to further expand its global network by breaking into the European and U.S. markets, since Lotte’s global operations currently center on Asian countries such as Vietnam and Uzbekistan and other regions like Russia and Guam.

The chain also has new hotels under construction in Shenyang, Yantai and Chengdu in China; Yangon in Myanmar; and St. Petersburg in Russia.

But the real expansion began when Lotte announced that it had agreed to buy the New York Palace Hotel in Manhattan for some $805 million from real estate management firm Northwood Investors.

The purchase, the company said, is intended to boost its foothold in the United States and brand recognition in the global market.

Lotte started operating the hotel under its new name from Aug. 28.

The Manhattan hotel has 909 rooms and 23 event halls. Aside from its size, the establishment is considered a major landmark, located near different historic sites like St. Patrick’s Cathedral, Carnegie Hall and Central Park.

The hotel was originally an upscale mansion known as Villard Houses, built in 1884 and owned by Henry Villard, then the president of the Northern Pacific Railway.

“We’ve long been interested in breaking into Manhattan,” he said. “Then we got an opportunity to acquire the Palace hotel, which is a New York landmark.

“The hotel has an average occupancy rate of 87 percent,” he continued, “and the hotel is a high-end accommodation with loyal clientele and an average nightly rate of $460.”

The CEO vowed to bring in service and expertise from headquarters instead of merely changing the name.

“In Moscow, for example, a group of 20 specialists was dispatched
there to train local staff,” he said. “This is how we improved the quality of
service.

“Since we acknowledge that the tangible changes and progress will be slow to come, we are going to seek gradual changes to improve service and accommodations. ”