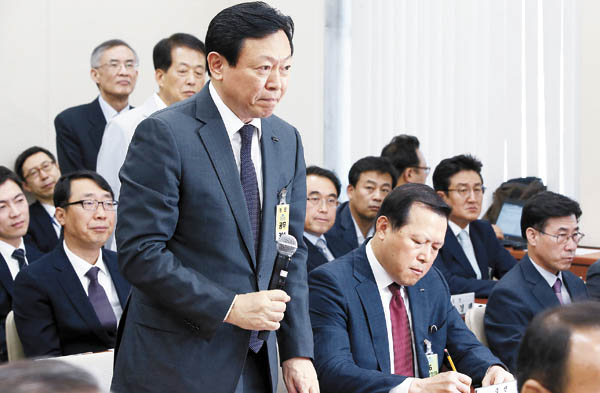 Lotte Group Chairman Shin Dong-bin makes a public apology for the family feud over control of the retail giant’s management earlier this year while attending an audit at the National Assembly in Yeouido, western Seoul, where he was questioned by lawmakers on Thursday. [NEWSIS]

It was the first time that a chairman from an owner family of one of Korea’s top 10 business conglomerates appeared at an audit to address controversial issues. His attendance indicates the seriousness of Shin’s battle with his older brother for control of the group and the bad press it brought Lotte, but some critics said the lawmakers’ grilling of Shin was nothing more than political theater to titillate the public.

The scion of Lotte’s founding family said that the dispute was over and that there was no possibility of it flaring up again. He also gave detailed timelines for the group’s ongoing restructuring plans.

Shin said that the group will finish an initial public offering of Hotel Lotte, a de facto holding company of Lotte’s operations in Korea, by the second quarter of next year.

“Things can be contingent because the timing depends on the decision by board members,” he said, “but I will try my best to complete the listing by the second quarter.”

Hotel Lotte is an unlisted hospitality operator and a key vehicle at the top of cross-shareholdings of Korea’s Lotte affiliates, holding a sizable number of shares in Lotte Aluminum, Lotte Confectionery, Lotte Shopping and Lotte Construction & Engineering. Despite the stakes it holds, reliable information about the company is hard to come by since it is not listed.

Shin said during the audit that his father, founder Shin Kyuk-ho, has given a green light for the IPO plan. He went on to unveil specifics of the IPO.

“New shares will account for 30 to 40 percent when taking Hotel Lotte public,” he said.

The decision appeared to address criticism that Lotte channels money it earns in Korea to Japan through Japan-based holding companies.

The 60-year-old chairman also reaffirmed that he will simplify Lotte’s byzantine ownership structure by reducing 80 percent of cross-shareholding links by the end of October.

Shin mentioned the latest effort
to live up to the pledge, citing his
purchase of shares held by a Lotte
subsidiary.

In August, he acquired a 1.3 percent share in Lotte Confectionery, held by Lotte Construction & Engineering. The chairman’s purchase will cut Lotte’s cross-shareholding links by 34 percent from 416 to 276, a group task force on restructuring said.