CNN International’s strategy: ‘Be on all screens, all the time’

CNN International’s strategy: ‘Be on all screens, all the time’ 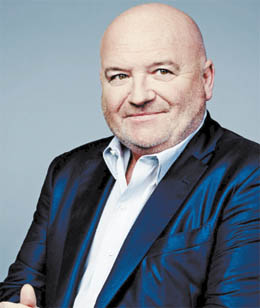 In commemoration of the JoongAng Media Conference, which marks the 50th anniversary of the foundation of the JoongAng Media Network, the Korea JoongAng Daily is running a series of interviews with major players in the media industry. The Know Way Out media conference will be attended by world-class experts in the media industry, including those interviewed beforehand. The conference, which will take place Monday at Dongdaemun Design Plaza Art Hall, will address the crises the media industry currently faces and suggest a new path for the years ahead. -Ed.

Most people nowadays flock to news channels that cater to their political inclinations. A case in point would be American conservatives who tune in to Fox News or liberals who watch MSNBC.

But CNN is somewhat exempt in that it is widely viewed by global audiences across political lines.

In an interview with the JoongAng Ilbo, Tony Maddox, the executive vice president of CNN International, said the strength of the global news channel came from its efforts to deliver the news “in as fair, objective and accurate a manner as possible,” adding that it was what viewers around the globe “expect and demand [from CNN].”

“Our strength is to give viewers the facts, to show all sides. That’s why CNN is the world’s leading news network,” he said.

On speculation that CNN has lost some of its influence on social network platforms, Maddox said that he “wholeheartedly disagreed,” proudly noting that his company “remains the world’s news leader” and currently reaches “more than 395 million households around the globe.”

Q. Part of being a journalist means attempting to change the world for the better. In this respect, CNN has made a meaningful change, especially with its award-winning coverage on efforts to end modern-day slavery.

Please elaborate on the background and the difficulties that came about before, during and after that coverage.

A. The CNN Freedom Project is something I am immensely proud of. CNN International launched it in 2011 to shine a spotlight on modern slavery. The idea behind it is to amplify the voices of victims, highlight effective prevention and victim assistance efforts, and investigate the criminal enterprises involved. The project is now into its fifth year, and during that time, we’ve published more than 400 investigative stories.

For me, the most gratifying aspect of the project is the fact that it has effected real change. Various NGOs report that CNN Freedom Project stories have contributed to changing laws and corporate policies, and led to more than 1,000 survivors receiving assistance. It has also generated over $24 million in donations to anti-trafficking organizations. Not only that, it has also inspired new NGOs and grassroots campaigns all around the world.

Last month, the U.S. State Department recognized the CNN Freedom Project - and my role in creating it - with a spot on their annual Trafficking in Persons Report Hero list, which is an incredibly important award in this field. And while I am still beyond humbled by this honor, it’s an achievement everyone here at CNN can be proud of. That work continues, and we are determined to carry on.

As an avid viewer of CNN International, especially when I was working on the international news desk, I am aware of the power and impact CNN has. However, some figures show that CNN is not what it used to be.

Do you agree or disagree, and why?

I would wholeheartedly disagree. As we celebrate CNN International’s 30th anniversary, I think we can absolutely say that CNN remains the world’s news leader. If you’re looking at pure numbers, CNN is available across all major TV, internet and mobile platforms, reaching more than 395 million households around the globe, including over 56 million across the Asia-Pacific region.

But it’s not just about the numbers - our journalism continues to be recognized for its quality. Most recently, CNN was named the Asian Television Award Cable & Satellite Network and Channel of the Year, and we were also the Royal Television Society News Channel of the Year in 2012 and again in 2013.

The other important thing to remember is CNN’s strength on digital platforms. CNN Digital is gaining strength all the time and is a go-to network for online news, mobile news and social media around the world. In fact, you could make a convincing argument that the CNN network is stronger than ever, with a wider audience than at any point in our history. But in spite of all of that, I think now more than ever, it’s important not to rest on our laurels, and it’s vital that we continue innovating, evolving and staying ahead of the curve.

In your efforts to keep up the good work at CNN, can you elaborate on some of your success stories, failures and what you have learned from those experiences?

I’ve already talked about the success of the Freedom Project, which I think has taught me more than anything that journalism can still make a difference, and that is important to remember. Time and again, we see stories that shake up the powerful, help change government policies, expose corruption and do the things that I think most journalists hope that they can do when they start their careers. It’s important not to lose sight of that.

But the world has changed a lot in my years at CNN, and unfortunately it has also become a much more difficult place to be a journalist. I’ve learned that some of the hardest decisions come when you are responsible for the safety of others, and that is something we take incredibly seriously at CNN. The risks for reporters now, especially in places like Syria, are so much greater than they once were. When you know that you have teams around the world, brave people working in very challenging circumstances, it can certainly keep you awake at night. We work extremely hard to make sure our people are safe.

Impartiality is a value cherished in journalism, but it can be difficult to remain objective. How do you value and protect the impartiality of CNN International?

The most vital commodity for a news organization is trust. You often hear people say that they will hear something on social media, and then go to CNN to see if it’s true - and that’s something we must work hard to preserve, and must never take for granted. CNN is the world’s leading 24 news channel because viewers know and trust us.

Accuracy and impartiality are the cornerstones of that reputation, and our philosophy of providing first-class journalism will never change. The editorial integrity and independence of CNN is our highest priority and must never be compromised.

What about the quality of journalism? CNN in May reported that Kim Kyong-hee, the aunt of the incumbent North Korean leader Kim Jong-un, was poisoned, but it turned out to not be true. What did CNN learn from this experience and what efforts have you made to fight against it?

When it comes to reporting about North Korea, media often has to reply on defectors’ accounts. At CNN, we always ensure we attribute information we receive to the relevant defector and in this case, we specifically said we were unable to independently confirm the report.

CNN does its utmost to ensure that our reporting is accurate and we pride ourselves in the quality of our journalism. We have clear processes and procedures to ensure that we get things right. Our focus is on delivering the news in as fair, objective and accurate a manner as possible. Our viewers expect and demand that of us and we must deliver on that promise.

What are the main traits and characteristics of the Korean market and the Asian market at CNN International? How do you maintain CNN’s impact in the region?

Asia is an incredibly important market for us. We’ve dedicated enormous news-gathering resources to this part of the world. We have a production centre in Hong Kong, bureaus in Seoul, Tokyo, Beijing, Mumbai, Delhi, Bangkok, Jakarta, Kabul and Islamabad.

We’re well-resourced here and have put strong leadership in place in this part of the world because we know how important it is. Our audience here, both in television and in digital, is both vast and loyal. The latest IPSOS survey was clear that the viewership and brand strength of CNN among international news organizations remains unparalleled across the region. We have no intention of letting that go.

Please share your plans for the next five years, the next decade, the next 50 years and the next century for the CNN International, especially in this increasingly digital age.

CNN was the original disruptor. We were in the cable news business before anybody else, we were in the digital space very early, and in mobile very early. I think that’s given CNN a competitive advantage and a pioneering mind-set. But of course the biggest threat is complacency.

Our strategy is to be on all screens, all the time. CNN is platform neutral: we’re on TV, we’re on digital, we’re on mobile; but it’s also important to remember that those platforms are not mutually exclusive. CNN has adopted a digital-first approach to the way we break news and tell stories, and digital is the pulse that goes to the very core of our business; but you only have to look at the way people invest money in television sets to see that TV is also alive and well - it is just changing. What is important is to change with it. We must be wherever our audience wants us.