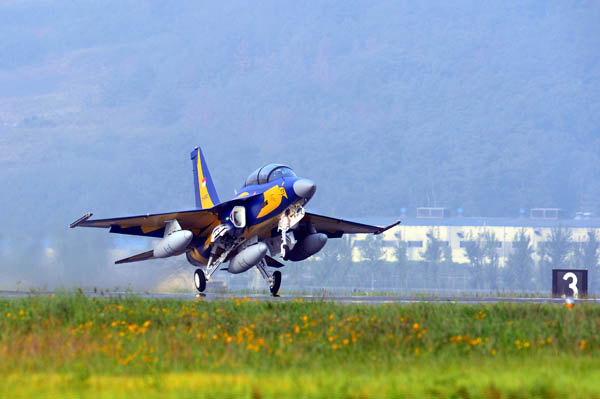 Four domestically-made T-50 supersonic training jets will be exported to Thailand, in what is expected to be the first batch of Korean aircraft to be purchased by the Southeast Asian nation.

The Thai government decided to replace its aged trainers with Korea’s next-generation light attack jets, which beat out models by the United States, China, Russia and Italy, according to Korea Aerospace Industries (KAI) on Thursday.

Thai officials inked the T-50 deal with KAI President Ha Sung-yong on Thursday. The four jets will cost a total of $110 million and will be delivered to Thailand within the next two and a half years.

China’s Hongdu L-15 jets remained the strongest contender against Korea’s T-50 until the final moments of the bidding process.

Other contenders included the Alenia Aermacchi M-346 Master jet from Italy and the Textron Airland Scorpion from the United States.

The T-50 Golden Eagle trainers are Korea’s first domestically made supersonic jets developed by the KAI, with technical support from America’s Lockheed Martin.

Thailand is looking to replace its antiquated L-39 jets, manufactured by the Czech Republic, which have been in use by the Royal Thai Air Force for over 30 years.

The Thai Ministry of Defence allotted a budget of some 3.7 billion baht ($103.7 million) at the beginning of the year to procure a new training aircraft fleet to replace its L-39s.

It will be the fourth country to purchase Korea’s T-50s.

Defense insiders have also pointed out that because Thailand plans to purchase an additional two dozen aircraft after the first fleet is delivered, the transaction could wind up being the largest export of T-50s to date.

In 2013, the Royal Thai Navy sealed a $470 million deal with Korean naval ship manufacturer Daewoo Shipbuilding and Marine Engineering to build a warship.