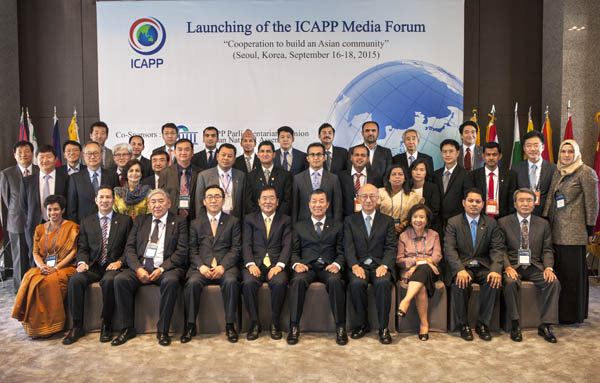 Members of the International Conference of Asian Political Parties (Icapp) Media Forum pose for a group photo at the opening ceremony on Thursday at the Plaza Hotel, central Seoul. Icapp on Thursday launched the media forum with journalists in the Asian region to promote more interaction between Icapp and people in the region through more diverse and wider media coverage of Icapp activities. By Park Sang-moon

Journalists and political leaders from Asian countries are starting their joint effort to build an Asian community.

The International Conference of Asian Political Parties (Icapp) on Thursday announced that it’s launching the Icapp Media Forum and held its first meeting at the Plaza Hotel in central Seoul.

Since it was established in 2000 in Manila, Icapp has tried to enhance mutual understanding and trust among Asian countries by promoting exchanges and cooperation between political parties with various ideologies from different Asian countries.

The newly launched media forum aims to promote more interaction between Icapp and people in the region through more diverse and wider media coverage of Icapp activities and it is also intended to promote communication, interaction and cooperation between the international media and Icapp in order to build an Asian community.

“As political diplomacy expands along with increased roles and responsibilities of political parties, a cooperative relationship between politics and journalism becomes a global phenomenon,” said Hwang Jin-ha, secretary general of the ruling Saenuri Party and a co-chairperson of the Icapp Media Forum elected on Thursday.

“In this regard, I’m confident that the Icapp Media Forum will make a new momentum for future development of Icapp.”

The Icapp Media Forum is composed of all 13 members of the Icapp Standing Committee and one journalist from each country represented on the committee. The media forum decided to elect two co-chairpersons, one from the standing committee and one from media representatives.

Co-chairperson Hwang is from the standing committee and Carmen Pedrosa, a senior columnist of the Philippine Star, was elected the other co-chairperson of the media forum from the media group.

Pedrosa initially proposed the media forum to the Icapp Secretariat under the Icapp system during the Icapp Special Conference on Development and People’s Access held in Nanning, China, in September 2011.

In the three-day event through Friday, the members of the media forum are discussing the theme, “Cooperation to build an Asian community,” and having meetings with leaders of governing and opposition parties.