North sanctions may not be enough: Kerry

North sanctions may not be enough: Kerry 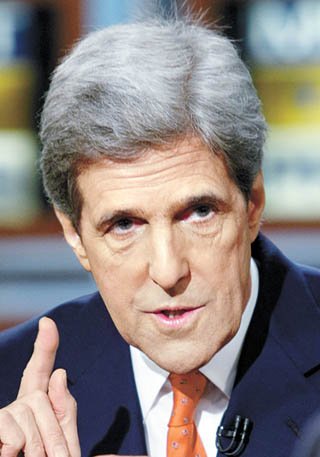 The United States warned of measures beyond economic sanctions to stop North Korea’s nuclear brinkmanship, as the reclusive communist regime reaffirmed its intention to fire a missile and test an atomic weapon.

U.S. Secretary of State John Kerry warned of increasingly “severe consequences’’ against the North on Wednesday, as Pyongyang issued threats earlier this week that it would fire a long-range missile and conduct a nuclear test in the coming weeks. The North reiterated its threats on Thursday, this time defending its plans as a demonstration of sovereignty and criticizing South Korea and the United States for having “double standards.”

Comparing the North’s situation with Iran, which recently reached a deal to curb its nuclear programs, Kerry said, “Kim Jong-un and North Korea have not made that decision.”

“And it was sanctions, broadly applied and accepted, that helped Iran to make an important decision,” he continued. “It may take more than sanctions with respect to North Korea because of its almost total absence of a legitimate economy.”

Kerry did not elaborate on what options other than sanctions Washington is considering.

Speaking to reporters after talks with South Africa’s foreign minister, Kerry said members of the six-party talks, including China and South Korea, have worked together to end the Kim regime’s nuclear brinkmanship, and they will put more pressure on the North.

“China, for instance, has taken serious steps in the last year, year and a half, since we engaged China on this subject specifically to encourage them to do more, and they have,” Kerry said. “They’ve taken trade steps. There has been no meeting between North Korea and its high leadership and China. There have been four or five meetings between China and the South Korean president. So I think that there is a process by which additional pressure is being applied to the North.”

“And obviously, I think we’ve already had discussions about the potential of what may have to now be done, if indeed the [North’s] media reports and others prove to be true regarding their nuclear facilities at Yongbyon and the plutonium production reactor facility also near Yongbyon,” Kerry said.

The North said on Tuesday that the country’s plutonium and highly enriched uranium facilities at its main Yongbyon nuclear complex had been “rearranged, changed or readjusted, and they started normal operation.” One day earlier, it announced its intention to fire a long-range missile, possibly within the next few weeks to mark the 70th anniversary of the foundation of the ruling Workers’ Party.

Kerry also said he had discussed the North Korea issue with his Russian counterpart, Sergey Lavrov, during talks on Tuesday.

“So there’s a lot happening, and I can assure you that all of these countries remain fixated on the need for North Korea to denuclearize with respect to its weapons program and to live up to its international obligations,” he said. “And we will continue to calibrate, as we did with Iran by the way, the increase of particular choices that are available to us in an effort to get back to talks.”

In addition to the United Nations’ sanctions on the North, the U.S. government has imposed independent sanctions, giving the Treasury Department the authority to go after Pyongyang. The effectiveness, however, is limited, as the North is largely isolated from the global economy.

The North is heavily reliant on trade with China, and Beijing’s cooperation is a key to pressuring the Kim regime. When President Park Geun-hye met with Chinese President Xi Jinping on Sept. 2, the Chinese leader made clear that Beijing would not tolerate actions from Pyongyang that further escalate tensions on the Korean Peninsula, such as a missile or nuclear test.

According to a Unification Ministry report to Rep. Shim Jae-kwon of the New Politics Alliance for Democracy, North Korea imported 23,698 tons of grain and 47,611 tons of fertilizer from China this year. The ministry also said China is believed to be providing the same amount of fuel, about 500,000 tons a year, to the North this year as before. It remains to be seen if Beijing will use oil supplies as leverage to stop Pyongyang from conducting a nuclear test.

China completely cut off oil to the North for months after Pyongyang’s second nuclear test in 2009. The North conducted its third nuclear test in 2013, and China’s records of oil exports to the North have been zero from January 2014 to now. Seoul believes oil was cut off for some of that period but was probably restored, although they do not know when.

Despite warnings from South Korea and the United States, the North reaffirmed its intention to go ahead with the missile and nuclear tests, insisting it is “exercising its sovereign rights.”

The country’s official propaganda website Uriminzokkiri said the North had recently declared its positions on the satellite launch and effort to bolster its nuclear deterrent power.

It said the U.S. and South Korean condemnations were actually “provocations” and the North cannot accept the “extremely unfair double standard that some can do everything they want, while it won’t be allowed to do anything.” 