Reflections on Germany in a post-war era

Reflections on Germany in a post-war era 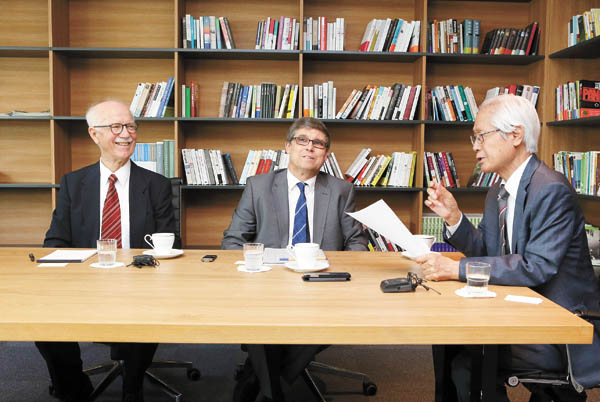 Kim Young-hie, a senior columnist at the JoongAng lbo, right, interviews Thomas Kunz, assistant secretary at the Ministry of Justice, Thuringia, center, and Albin Nees, former vice minister of Saxony, on Wednesday at the JoongAng Ilbo. By Cho Moon-gyu

Since its transformation into a unified state, an event that defined the end of the Cold War, Germany has oft been cited as a case model for Korea.

South Korea remains in a technical state of war with North Korea, while the gap in living standards and personal freedoms for the people on both sides continues to widen.

Germany’s trials and errors as well as its success in bringing about national unity, have long been touted by scholars and observers as an ideal - if not the only - example that serves to illustrate the potential opportunities and challenges that could befall the peninsula in the event of unification.

In an interview Wednesday with Kim Young-hie, a senior columnist at the JoongAng lbo, Albin Nees, former vice minister of Saxony, and Thomas Kunz, assistant secretary at the Ministry of Justice, Thuringia, shared their thoughts on Germany’s efforts over the past two decades to achieve a complete sense of unity. During discussions, both advised South Koreans to begin preparing for reunification, an event “characterized by its dynamic momentum” that has the potential to emerge “much sooner than expected.”

Below is an excerpt:

Q. In order to achieve unification, two divided states must be united in legal terms first, followed by social integration. Former Vice Minister Nees has actively taken part in bolstering social welfare programs to achieve equal living standards for Germans in a unified Germany. How would you rate the progress of integration in Germany now?

A. Nees: In my opinion, Germany has achieved about a 95-percent level of internal integration. This level represents a high level of unity among Germans. But the process toward achieving this goal has been a painstakingly slow one. And there are still some gaps between the former Western and Eastern German territories.

In hindsight, it took us a relatively short time to achieve 80 percent of the 95 percent social integration we have now achieved. But from that point, gaining an additional 10 or 15 percent has required more time. I project it will take another 15 years for Germany to achieve 100 percent integration.

What are the social elements that have yet to be combined in a unified Germany?

Nees: The remaining percent is largely in regard to the emotional aspect, especially for the people who lived in East Germany. Many of those from the East have felt a loss of identity because much of what their lives had been based on suddenly came to an end after unification - particularly the collapse of the national economy. Regaining their confidence and nurturing a sense of identity as unified Germans must be achieved to realize 100 percent integration.

What about economic integration?

Nees: I think Germany has yet to achieve 100 percent economic integration. But looking at living standards in the east and the west, up to 95 percent integration has been accomplished, meaning that the workforce in the former East Germany earns about 90 to 95 percent of the current income. But for workers younger than 35, the level of income is the same across all regions. In terms of pension benefits, 92.3 percent integration has been accomplished. The political establishment has set a 2020 deadline for Germany to achieve total wage equality.

A unified Germany implemented a 1-1 conversion for pensions from the East to the West, meaning that people in the East benefited hugely, getting about four times more than they paid into the system. Didn’t people in the West complain?

Nees: Of course many protested the 1-1 conversion. Those kinds of complaints came not only from decisions on the pension system but also over the entire economy. In the first months after the unification, people were euphoric about a united republic. But that joy didn’t last long and soon cooled down. Prior to the official reunification on Oct. 3, 1990, nearly 550,000 East Germans defected to the West, becoming a burden on West Germany’s economy. ... There was also a big gap in productivity between people in the East and the West. Compared to the West, East Germans’ productivity stopped at 54 percent, and yet the unified Germany carried out a 1:1 valuation of currency after unification. Without the tremendous sacrifice by people in the West, economic integration could never have been possible.

Kunz said in his speech that the judicial branch was subjugated to the Communist Socialist Unity Party of Germany. At the onset of unification, East Germany’s Constitution was transferred to West Germany. How did five regional states in the East respond to the unification in terms of the overhaul in the legal systems?

Kunz: The East regional states had their own way of readjusting their legal systems. But the most important principle in the legal sector at the time countrywide was that the reunified Germany must have a legal framework required by a law-governed state. Many efforts were put into preparing a reunified Germany governed by the rules of law.

How did the process in integrating the legal system come about between East and West Germany after reunification?

Kunz: One of the most significant measures to reform the judicial branch in the East was to implement a screening process to judge who could continue to work as judges or prosecutors in the judicial branch in the unified country. For example, if a provincial state in a former East German territory was to appoint judges, we would have a carefully designed selection process to determine whether he or she was eligible and qualified to continue his or her public service in accordance with the rules of law in a unified Germany.

There was one applicant for the selection process who had served the former East German government as a judge in Thuringia. We examined whether he could still be up for the job by poring over his past ruling records. We discovered he had handed down a severe ruling for a man who had plotted to defect to the West with his family. We concluded he had given too harsh a ruling when he could have handed down a lighter one. So we judged he was not qualified to serve in the judicial branch in a united Germany.

What advice can you give to the Korean people for reunification?

Kunz: Drawing from my own experience, people always have to keep in mind that reunification can come much sooner than expected, which was the case for Germany. By its nature, unification is characterized by its dynamic momentum. It is nearly impossible to draw out preparations because there are so many variables in unification. ... I also encourage Koreans to look at the bright side to be borne by reunification. Rather than worry about the costs that would be incurred from unification, Germans focused on its potential and the opportunities reunification could bring about. I hope Koreans look at reunification with that same optimistic perspective.