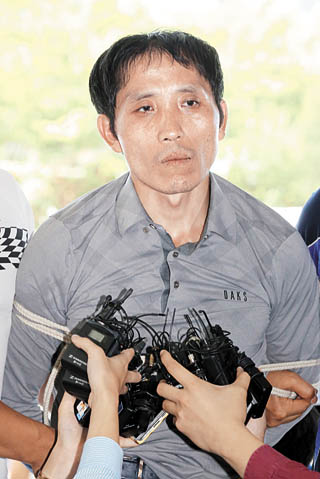 Kim Il-gon, who allegedly kidnapped and killed a woman, answers questions from reporters while being taken into the Seongdong Police Precinct in Seoul on Thursday. Police said the 48-year-old suspect stated that he did not mean to kill the victim at first. By Shin In-seop

Police on Thursday arrested an unemployed man they believed kidnapped and killed a 35-year-old woman and then attempted to blow up the victim’s body inside her car.

The Seongdong Police Precinct in Seoul announced Thursday that it is questioning Kim Il-gon, 48, on a homicide charge.

Kim was caught after he entered a veterinary clinic in Seoul on Thursday and threatened a nurse with a knife, demanding euthanasia drugs for animals. A veterinarian and another nurse called the police, and the suspect ran away.

He was found nearby by police and resisted arrest, injuring one policeman with the knife.

Police believe Kim abducted a woman surnamed Joo by threatening her with a knife as she tried to get into her car at a mall in Asan, South Chungcheong, on Sept. 8.

“Kim is claiming that he did not mean to kill the victim but only meant to take her car and cellphone,” a police officer said on Thursday. “But he admits that he killed her because he got mad when she tried to run away.”

According to police, Kim strangled Joo to death when she said she needed to use a restroom but tried to run away.

“He said he would not have killed her if she did not try to run,” a police spokesman said. “But he admits he has bad feelings about women after a female employer once did not pay him his wages.”

According to the police, Joo’s body was mutilated.

On Sept. 11, Kim tried to destroy the evidence by setting Joo’s car on fire in Seoul. Joo’s body was in the trunk along with butane cartridges that did not explode.

The police have chased Kim for a week after his image was found on security camera footage near where he burned the car with the body. His fingerprints and DNA samples were also found in the car.

Police had trouble pursuing him because he used phones that couldn’t be traced and stole a license plate from another car.

On Monday, police offered a 10 million won ($8,600) reward for anyone who made a critical contribution to his apprehension.

Kim had a criminal record of 22 convictions, including for theft and robbery.

The police added that the suspect was living on the basic living welfare payment. He allegedly assaulted a lodging house manager when asked to pay overdue utility bills in July.

According to the Gangnam Police Precinct, Kim apparently had a minor collision with a taxi on Aug. 16 but fled the scene.

Police checked the license plate and summoned Kim for investigation, and he insisted he was not driving the car at that time. He said he would return to the police with the person who drove the car on Aug. 24.

However, he allegedly attempted to abduct a woman at a mall in Ilsan, Gyeonggi, on Aug. 24. She resisted, but he managed to steal her car and drive away.