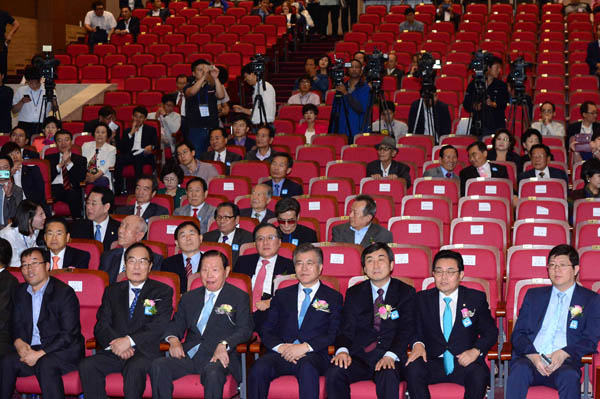 Leaders of the main opposition New Politics Alliance for Democracy (NPAD) attend a ceremony celebrating its 60th anniversary on Friday at the National Assembly. Appearing to be a reflection of ongoing internal feuding within the party, a number of seats in the hall were left vacant. [NEWSIS]

The main opposition New Politics Alliance for Democracy (NPAD) celebrated its 60th anniversary on Friday amid tensions that remained over a vote of confidence for its party chairman.

The ceremony, held Friday at the National Assembly in Yeouido, western Seoul, was attended by the party leaders, advisers, lawmakers and other members of the main opposition.

“Looking back on 60 years of history, we must be even more unified for new victories and hope in the future,” said NPAD Chairman Moon Jae-in. “Let’s make a party that will last for a century, with reforms and solidarity among its members, a party that gives hope to the people for its new values and visions.”

Friday marked the 60th anniversary of the establishment of the Democratic Party, the predecessor to the NPAD, on Sept. 18, 1955, which was formed at a time when the ruling Liberal Party was leading controversial constitutional reforms to allow President Syngman Rhee to serve without term limits.

The reform bill needed the consent of two-thirds of 203 attending members in the National Assembly - which was approximately 135.33 - though only 135 people agreed to the change. The Liberal Party afterward insisted that the number should be rounded up, passing the bill, which triggered the political factions against Rhee to band together to form a new opposition party.

The vote of confidence over Moon’s leadership abilities, however, cast a shadow over celebrations on Friday, with party leaders at a loss over what moves to take.

Moon has insisted a vote of confidence is the best way to bring a sense of unity to the main opposition.

Earlier that day, prominent NPAD members held talks with Moon to ask him to drop his plans for a vote of confidence, suggesting instead to cooperate with him to operate the party.

The lawmakers also suggested holding a joint meeting with other party representatives on Sunday to discuss the matter.

Moon told reporters after the anniversary ceremony that he still believes a vote of confidence is the best course of action for the NPAD, though he did not rule out the possibility that he may change his mind.

“I suggested the vote of confidence because it will end division and conflict among party members,” he said, “and I still believe that it would be proper to question their confidence in me in a way that is not necessarily to my advantage.”

“I appreciate that long-term lawmakers are trying so hard to unite and harmonize the party,” he continued. “I’ll look in on the progress and conclusion made after the joint meeting on Sunday.”

On the sidelines of the anniversary, the NPAD’s reform committee also demanded that Moon retract his decision for a vote, particularly given the party’s passage on Wednesday of a plan that would reform the main opposition’s party nomination system.

“The passage of the reform bill [demonstrated] the party’s confidence in him,” the reform committee said in a statement. “More division and conflict within the party will only cause it to disintegrate.”

Moon had previously vowed to step down as party chairman if the reform bill was voted down.

The bill passed, however, inviting even more backlash from Moon’s critics, who argued that the chairman was attempting to get the bill passed by linking it to his position in the NPAD.