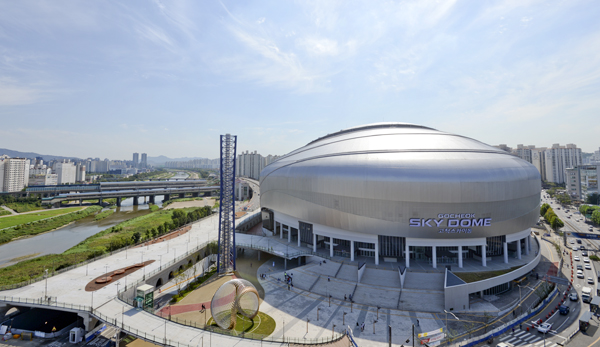 Construction of the Gocheok Sky Dome, located in Guro District, western Seoul, was completed last Tuesday. The dome, however, is criticized for its cost and low accessibility. [NEWSIS]

Korea’s first full-dome baseball stadium was completed last week in Seoul, but concerns are rising over whether the place can satisfy both the city and the club slated to play there.

A ceremonial first game was played on opening day between the women’s national baseball team and the Seoul National University men’s baseball squad.

There have been reports that K-pop group Exo will perform there on Oct. 10, but the city-run Seoul Metropolitan Facilities Management Corporation, which will be in charge of operating the dome, said nothing has been confirmed yet.

Local baseball fans had long called for a full-dome baseball stadium because Korea Baseball Organization (KBO) League games are often cancelled due to monsoon rains. Others argued the city needs an enclosed venue to host other kinds of events like concerts.

The birth of the dome wasn’t easy. It all began in 2006, when then-Seoul mayoral candidate Oh Se-hoon promised to tear down the Dongdaemun Baseball Stadium. Local baseball fans originally wanted to build a new baseball stadium on the same site, but Oh, who later won the election, decided to build the Dongdaemun Design Plaza instead.

The second plan was to build the new stadium near the Jamsil Sports Complex in southern Seoul, but this was also scrapped.

In 2007, the Seoul Metropolitan Government announced it would build a non-dome baseball stadium. The following year, it changed plans to build a half-dome stadium, and in 2009, it finally confirmed the new stadium would be fully enclosed. .

During the process, there were eight design changes, and the construction budget soared from about 46 billion won ($39 million) to more than 240 billion won. It was one of the hot issues in last year’s National Assembly audit.

The cost may have been controversial, but as a result, the Gocheok Sky Dome looks fancy. It has a capacity of about 18,000 for games, and artificial grass and fences were installed after consultation with Major League Baseball groundskeepers. The same type of dirt used in big league ballparks has also been utilized.

Home plate is 122.2 meters (400.9 feet) from straight away center, and 99 meters down the right field and left field lines, which makes it the second-largest field in Korea, after the Jamsil Baseball Stadium in southern Seoul. It is 67.59 meters from ground to roof, making it five meters taller than the Tokyo Dome in Japan.

Now that the dome exists, however, the latest controversy is how it can generate money for both the city and KBO clubs.

The LG Twins and Doosan Bears, which both use Jamsil Baseball Stadium, weren’t willing to consider a move to the new stadium. That left the Nexen Heroes, which has been using Mokdong Baseball Stadium in southern Seoul from 2009, as the city’s only option.

The Heroes have been renting the stadium in Mokdong since 2009 and reportedly pay around 4 billion won a year to the city of Seoul to use it. This includes stadium and office rental fees, a 10 percent commission on admissions revenue from games, and some advertising revenue.

Seoul originally planned to rent Gocheok Sky Dome to the Heroes, similar to how the club is currently renting the Mokdong Baseball Stadium. However, the city wants the Heroes to pay more money, reportedly double the team’s current rent.

The city claims that the maintenance costs at the dome are higher because it is more expensive to heat and cool the venue. It also says the Heroes will make more money from advertisements and admissions because the stadium has symbolic value as Korea’s first-ever domed baseball stadium.

The Heroes, however, have been dismayed by the city’s proposals. As the only club in the KBO not run by a conglomerate, the Heroes don’t have much extra cash lying around. The team has been able to survive by being the league’s most innovative in terms of marketing, but it still struggles to make big profits.

“The market for baseball advertisements is already saturated,” said an official from the Heroes who asked not to be named. “In Mokdong Baseball Stadium, we also see lot of away-team fans, but since the new stadium has bad accessibility, we might see drop in attendance.”

The Heroes have been vying for full management rights of the stadium, which would allow them to collect revenue on events held there other than baseball games and subsidize the rent they pay to the city.

Currently, the rights are held by the Seoul Metropolitan Facilities Management Corporation.

But time has been on Seoul’s side because the Heroes need to leave Mokdong Baseball Stadium by next year. The Seoul Metropolitan Government and the Korea Baseball Association agreed last year to use the stadium as the main venue for amateur baseball games.

After a long tug-of-war, both sides are saying the negotiation could be put to an end as early as this week. The Heroes first need to ink the deal with the city government before reaching an agreement on the details of the use of the facility with the Seoul Metropolitan Facilities Management Corporation.

According to Ilgan Sports, an affiliate of the Korea JoongAng Daily, the Seoul Metropolitan Facilities Management Corporation will reportedly get operation rights for the dome for two years, and the issue will be revisited at the end of the period.

The Heroes say they wants to be evaluated fairly by the city during the period and hope they will eventually receive full operating rights.

The city, however, is emphasizing that since the dome was built using taxpayer money, the primary concern is that citizens are able to enjoy the stadium. The city has also reminded the club that the stadium was built not just for baseball, but also for concerts and other events.

Experts are arguing that the conflict is unnecessary, as both the venue and the club depend on each other for success.

“In order for professional baseball to become a big-money industry, there needs to be a strong foundation,” Jeon Yong-bae, a professor of sports management at Dankook University, told Ilgan Sports. “The Gocheok Sky Dome is a project funded with taxpayer money, but the success of its operation depends on the Nexen Heroes. If the tenant of the dome is not financially healthy, the operation of the dome will be also in danger.”