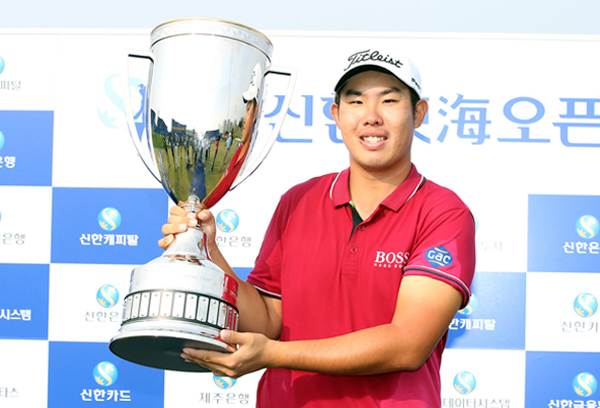 An Byeong-hun lifts the trophy after winning the Shinhan Donghae Open in Incheon on Sunday. Provided by Shinhan Financial Group

An Byeong-hun and Noh Seung-yul have much in common, but as of this Sunday, they share one fewer fact.

Both golfers were born in 1991, and they have established their names outside Korea.

An, whose parents are Ahn Jae-hyung and Jiao Zhimin, both of whom medaled in table tennis at the 1988 Summer Olympics in Seoul, won the European Tour’s BMW Championship in May and the U.S. Amateur Championship in 2009.

Noh is the youngest Korean to win a PGA Tour event after taking the 2014 Zurich Classic of New Orleans. He was also the youngest prize money champion in the Asian Tour in 2010.

And until this Sunday, neither had won a KPGA Korean Tour event.

That commonality was broken on Sunday as An edged Noh to win the 31st Shinhan Donghae Open.

At the Bear’s Best Cheongna Golf Club in Incheon, An finished the final round with a bogey-free 4-under 67 to finish the event with a total of 12-under 272, beating Noh by a stroke.

The Shinhan Donghae Open was An’s third KPGA Tour event. It was also the first time since the Ballantine’s Championship in April 2012 that he played in front of local fans.

The victory will hopefully mitigate An’s snub on the Presidents Cup, which will be held in Incheon next month.

Despite having the highest world ranking among Koreans at No. 56, An failed be in the final squad for the international team, as captain Nick Price chose compatriot Bae Sang-moon.

Both An and Noh played the fourth round as co-leader at 8-under and had a tight race until the end. But it was the last par-4 18th hole that determined the fate of the two players.

Second from the rough, Noh had to make a birdie putt 10 meters (33 feet) away from the hole, which eventually forced him to take a 2-meter par putt to the left.

While An managed to wrap the hole with a par, Noh missed his putt, costing him the championship.

For Noh, the Shinhan Donghae Open was his 19th KPGA Tour event. He now has four runner-up finishes in his homeland.

“I hope we can help each other and go to the Olympics together.”