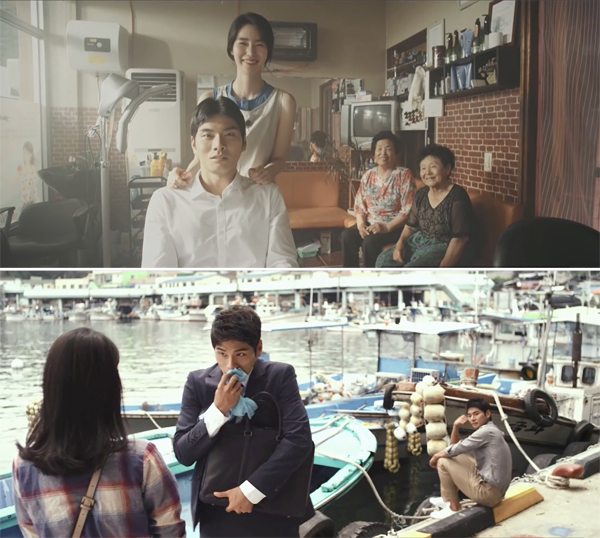 From top to bottom: A couple in SG Wannabe’s “Love You” video enjoying dating life. SG Wannabe’s “Good Memory” video includes scenes of the man reflecting on a scene of himself spending time with his lover after their relationship has ended.[Screen captures]

Since the most recent installment of the biennial music festival of “Infinite Challenge” last month, the K-pop songs unveiled on the show have been dominating Korean music charts.

Various tracks, such as “Leon” by singer IU and entertainer Park Myung-soo, that debuted on MBC’s flagship reality program on Aug. 22 have been at the top major music charts for almost three weeks, making it seem impossible for any other songs to overtake them.

However, R&B duo Fly to the Sky managed this feat through an innovative approach to songs and music videos.

Bringing out a new album on Sept. 14 for the first time in almost a year, the veteran male group won instant acclaim for the two title tracks, “It Happens to Be That Way” and “If I Have to Hate You.” Both new fans and older fans who grew up listening to the duo have praised their soulful voices, saying the songs stand out from the K-pop hits that all sound the same.

But what really sparked the public’s attention was the two music videos that accompany the songs. Although Fly to the Sky has often used music videos to tell a story, previously the tales began and ended within a single clip. This time, however, the duo portrayed a single love story across two music videos. This is the first time the group has released double title tracks and two music videos with a connected story.

“[Fly to the Sky] featured a single story in two music videos because [we] wanted viewers to realize at once that there are two title tracks [on the latest album],” said Park Je-sung, the director of the male group’s talent agency, H2media.

When the music video for “It Happens to Be That Way” depicting the latter part of the love story revolving around two women and a man was unveiled at midnight Sept. 14, the story instantly generated buzz across the Internet. Many viewers who watched the video severely criticized the male character, who leaves his bride at the altar for his ex-girlfriend after she appears at their wedding. 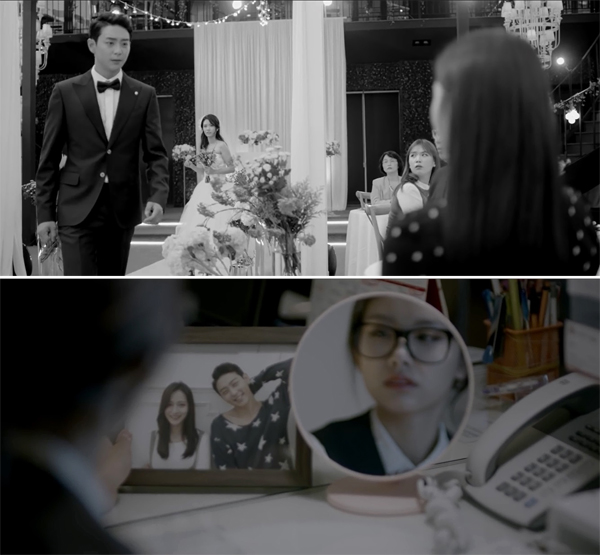 From top to bottom: Fly to the Sky’s “It Happens to Be That Way” video shows a man leaving his bride-to-be at the altar for his ex-girlfriend. A scene from Fly to the Sky’s “If I Have to Hate You” video features a woman who is envious of her friend for dating the man she loves.[Screen captures]

Yet, when the music video for “If I Have to Hate You” was released 12 hours later, viewers’ attitudes changed. After seeing the rest of the story and realizing what the bride had done in the past - stealing her groom-to-be from her friend - viewers were enraged. Instead of blaming the groom, they started criticizing the bride.

The stories took many viewers by surprise and kept them interested. Fans have even started demanding an extension of the series, expressing a sense of frustration over such a quick ending.

“I want part three. This drama can’t end now,” wrote one of commenter on the video’s official YouTube page.

In response to the positive feedback, Fly to the Sky is considering taking a similar approach the next time they release a new album.

“If a new record comes out next year, and if it also features double title tracks, [the R&B duo] is likely to once again [create a single story in two music videos],” Park said.

Another singing group that used a similar method in producing music videos for their double title tracks is the ballad trio SG Wannabe.

The group’s latest album and first release in almost four years, “The Voice,” came out on Aug. 19 with the title songs “Love You” and “Good Memory.” The music videos for the tracks tell the story of a man from Seoul who visits the countryside for a business trip only to fall in love with a girl from a hair shop.

The “Love You” video portrays how the couple meet and the time they happily spend together dating, which comes to an end when the man is summoned back to Seoul by his boss. The story continues in the second video, which starts with the man returning to his lover in the countryside.

Regarding the reason behind telling one story across two music videos, Jung Soo-young from the trio’s agency, CJ E&M, explained, “It is important for dramatized music videos to portray detailed emotions [of characters], which is not easy to accomplish within 3-4 minutes.”

““Love You” and “Good Memory” feature the beginning of a couple’s love and its end, respectively. And we produced the music videos of the double title tracks in such a way to properly deliver the impression of the music to the audience.”