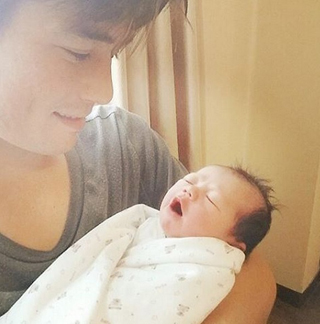 Korean-American model-turned actor Ricky Kim expressed his elation over becoming a father for the third time on Saturday. Kim welcomed his newest addition, a baby girl, over the weekend with wife Ryu Seung-joo.

The 34-year-old TV personality on Sunday uploaded a photo onto his Instagram account that showed him cradling his newborn daughter, introducing the baby as Ellysen Victoria Neely, and thanking his supporters for their prayers and well wishes.

Kim is currently appearing in the reality program “Oh! My Baby,” which centers on celebrities and their children.

Kim began his acting career in 2006 in the four-episode television series “Miracle.”

He began receiving more attention after appearing on the reality show “Law of the Jungle” (2013).