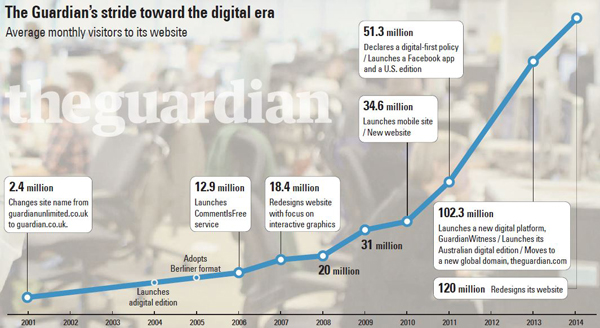 The media industry is currently undergoing a transformative period in which growing importance has been placed on catering to consumers via digital platforms. What is clear is that if a media outlet wishes to survive, it must adapt to changing market trends. To mark the 50th anniversary of the establishment of the JoongAng Media Network, the JoongAng Ilbo spoke with major industry forces to learn about their trials and successes in securing new revenue sources during an era marked by technological advancement. In this three-part series, we will examine the current state of the media and its future as demand for original, quality news content rises. - Ed


The Guardian’s aim to achieve an open digital philosophy can be evidenced on its pages across the web, mobile phones, tablets and within its newspaper. The 194-year-old British media group first introduced its digital-first strategy four years ago, setting the goal to double its digital revenues by 2016.

It doesn’t take more than a second to recognize underlying identities embedded in the content provided by The Guardian via different formats, even for those unfamiliar with the brand. And it is this unity that underlies all versions of The Guardian’s
products.

On each digital platform, the media outlet emphasizes different news content, optimized for each source. For desktops, The Guardian’s website neatly displays each article and photo in an individual contained space. For smartphone users, it puts weight on delivering breaking news minute by minute.

For tablet users, The Guardian puts the focus on visuals. A long-respected news organization, The Guardian has successfully embarked on a journey into the digital world after years of delivering traditional hard-hitting journalism. “We have been in a state of permanent revolution since 2005 in some sense, but there’s also been an awful lot of continuity,” said a senior member at The Guardian on its efforts to advance technologically.

The Guardian drew around 120 million visitors to its website in January, four years after it officially declared its “digital first” strategy, which demanded a greater focus on imagination, attention and investment in a digital future.

And while it enjoys a large number of visitors, it has yet to introduce a paywall system adopted by many others in the industry.

The JoongAng Ilbo sat down with Wolfgang Blau, The Guardian’s digital strategy director, in late June to discuss the newspaper’s successes and the challenges ahead.

Mobile journalism, he said, could “bring about the best writers journalism has ever seen,” with readers’ attention now more coveted than ever before.

Blau also asked the JoongAng Ilbo to provide his Twitter account,
@wblau, saying he hoped to reach out to a Korean audience.

Q. The Guardian is a global success story.

A. We have the advantage of publishing in English, which means we can expand internationally with greater ease. From there on, though, it gets a bit more complicated: How exactly do you expand globally? Do you launch ever more national editions, do you primarily invest in a global edition or should you focus on transnational journalism for larger regions of the world, such as Latin America? We are currently running regional editions from our three newsrooms in London, Sydney and New York, but we have also launched an international edition whose audience is growing very fast.

You constantly renovate your website. What is the thought process for that?

Our mindset is geared toward a nimbler, leaner culture of constant experimentation versus doing what print publishers usually do, which is to redesign their publications in much longer cycles and with less reader-facing experimentation. Our developers ship minor - and sometimes larger - changes to our site several times a day. At any given time, we have multiple A/B-tests running.

You conducted lots of research before relaunching your website.

We said, “Let’s publish an early version of what we think could be something totally different, let’s show this rough prototype to 5 percent of our readers worldwide and then ask them for personal opinions and observe their behavioral data.” Before we eventually launched the new site, we had already received 140,000 pieces of structured user comments that allowed us to make many, many changes to the initial idea and develop it. We changed font sizes, navigation structures, color schemes, story density and many other things based on this ongoing user feedback.

A challenge most publishers seem to be facing now is how to recruit and then retain the best developers. The competition with Silicon Valley giants and tech start-ups for developers is immense. While most publishers can’t compete with Silicon Valley in regard to salaries and stock options, you can still offer developers a highly stimulating and societally meaningful career option, as long as you make sure your product teams are being given the same respect and appreciation as your editorial staff and that they aren’t separated from each other in silos. Make sure your developers and your journalists know each other personally, can share workspace together and are encouraged and also expected to learn from each other.

It depends on the subject matter. An obvious opportunity is to at least co-locate your CMS developers with your editors and producers who use that CMS each day.

You have not introduced a paywall yet. Why not?

That is something you need to ask our CEO. As far as I know, though, The Guardian has never categorically ruled out a paywall. For us, paywalls never made sense as a business; the numbers simply didn’t add up. In addition, there are the editorial concerns we have in regard to what a paywall would do to our practice of open, collaborative journalism.

The majority of our traffic is mobile, as is the case for many other leading news organizations around the world. I do think, though, that when discussing mobile journalism, we mostly think about optimizing individual texts, videos, interactives and live blogs for mobile screens. Meaning, we mostly optimize for mobile users on an item-by-item basis, while mobile clearly forces publishers to also re-think their overall editorial propositions, such as their overall mix of news versus non-news journalism and their mix of visual versus text-based journalism.

What changes might be needed to writing for mobile first?

Drop intros - also called “scenic intros” - which are popular in magazine journalism, mostly don’t work on mobile screens for a simple reason: On paper and on a desktop screen, you can skip them and most readers do skip them, indeed. On a mobile screen, however, you have to scroll before you know if that text might still become interesting, which a large percentage of readers don’t. They rather swipe sideways to the next story or take off to another app, site or social post. More fundamentally, though, and this goes far beyond the question of whether you are ready to abandon drop intros or not, is the question of whether you always need to produce fully written narratives or if many news stories wouldn’t be conveyed much better as written bullet points.

Maybe with the exception of live blogs, our conventions for what text-based journalism looks like are still based on print. Mobile will finally force us to change that. This is no reason to mourn or proclaim the end of exquisite writing or to worry about the future of long reads. Long reads will have their place, just as we now read whole novels on smartphones. We will have to become smarter, though, in how and when during your day we present long reads to you, which could include personalization and so-called day-parting. It seems very likely to me that mobile journalism will require and will bring about the best writers journalism has ever seen because now you have to captivate readers and justify your writing screen by screen, no matter which style or genre. Eventually, mobile journalism might even lead to better print journalism.

How do you measure success?

Great question. What digital journalism is still missing are metrics that can help us measure and quantify journalistic success. Yes, we have become quite good at measuring more than just unique browsers, visits, page views, referral paths or user journeys, and can also measure session times and scroll-depth as proxies for how engaging our journalism is. In the end, though, most of these metrics are commercially
driven and conceived, not journalistically. They only tell us what happened while you were with us as a reader or viewer.

What happened, though, after you saw that video or interactive or after you have read that article, and even after you posted a user comment about it or shared it on social media? Then what? This is the moment when good journalism unfolds its value.

Did our story make you research that topic further? Did you buy a book about it? Did you get politically active because of it? Did our journalism change your voting behavior? Did the story get discussed in your city council or national parliament? Did it lead to new research grant applications? Did it inspire a documentary or movie production? Did it make you more hopeful, more concerned, more compassionate? Did it change your behavior as a consumer?

These are all ‘Now what?’ metrics. You have visited us, you read or watched something and we measured that interaction, but now you have left again. Now what? What was our impact on you and what will you do with it?

While many publishers explore membership models as new sources of funding, there is now also a stronger business interest in developing new ways to describe and measure these kinds of ‘Now what?’ qualities of journalism. And even traditional digital advertisers have a growing interest in more than just reach, but also want to know how engaging your journalism is long after your reader has visited you. Journalism needs new metrics.