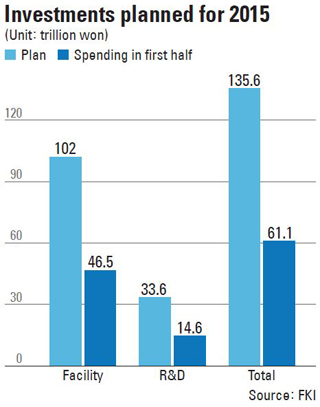 About 45 percent of the investments announced by the nation’s top 30 conglomerates for this year have been executed in the first half, a report by the Federation of Korean Industries (FKI) said on Sunday.

According to the report, the country’s top corporations, including Samsung, Hyundai Motor Group, SK, LG, Lotte and Posco, planned to invest a total of 135.6 trillion won ($115.6 billion) for this year and 45.1 percent, or 61.1 trillion won, of that was actually spent in the first half.

The FKI said the figure is a positive sign considering that most of the conglomerates are facing tough economic situations, like the impact of the Middle East respiratory syndrome (MERS) outbreak and poor economic conditions in newly industrialized nations like China.

By sector, the FKI said the conglomerates planned to invest 102 trillion won of the budget in expanding facilities and equipment, which would be a 19.3 percent rise from a year earlier. An additional 33.6 trillion won was to be invested in research and development, a 7.6 percent rise year-on-year.

“Traditionally, the investment execution ratio has been at the 40 to 45 percent level in the past,” said Song Won-geun, a spokesperson for the FKI. “Considering the recent poor economic conditions, it looks like local companies are following through on their investment plans. ”

The report said the companies have been consistently increasing their investments since 2008 despite different kinds of economic crises, adding that the total investment figure made by the top 30 companies increased from 81.4 trillion won in 2008 to 116.7 trillion won last year, or by an average of 6.2 percent per year, which is higher than the nation’s average household consumption expenditure rate of 4.1 percent during the same period.

“The companies are having a tough time in terms of sales in both the domestic and export markets, but are trying hard to keep their plans regardless of such situations to help the government’s efforts to vitalize the local economy,” Song said.

“If the government tries to keep reforming necessary regulations to provide an environment that is friendly for global business activities, the companies will be able to invest all the money they have planned to.”