Trends that give consumers fresh food for thought

Trends that give consumers fresh food for thought

Visitors to the 2015 Korea Food Show look at processed foods targeting single people or elderly people with special diets at the aT Center, Yangjae-dong, southern Seoul. The event was held between Sept. 10 and 12. By Oh Jong-taek

Much like the waistline of those who overindulge, food is an expanding business.

Across the world, food industry sales also swelled to $5.3 trillion in 2014, Datamonitor, a U.K. business information provider said, which adds up to an average 3.9 percent annual growth.

The pace of growth is faster than the IT industry or auto industry, Datamonitor says.

The Ministry of Agriculture, Food and Rural Affairs recently held a “Korea Food Show 2015” in Seoul to offer a glimpse of three current trends in the food industry.


Trend One: Silver and single 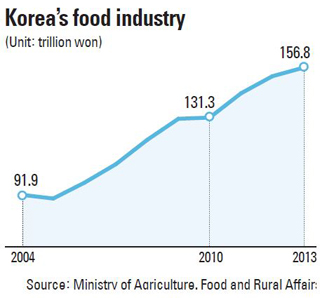 A robot, named CIROS-2, was one of the most popular attractions at the show. Developed by the Korea Advanced Institute of Science and Technology (KAIST), the robot is expected to take charge of many chores in the home, replacing human involvement within 10 years, a KIST researcher said.

Technology is not the only shift in the food industry. Consumers are also shifting to silver or single - elderly or single people. A report from Korea Health Industry Development Institute shows the so-called “silver generation” market will be expand to 72.9 trillion won ($62.8 billion) in sales in 2020 from 39.3 trillion won this year. So-called silver food is an emerging market.

Industry observers say silver food should be easily digestible, but they must also be high-quality and nutritious, tailored for each individual, considering his or her health needs.

Singles are already a major client for the food industry. Statistically, the number of single-person households stood at about 5 million this year, a quarter of all households. 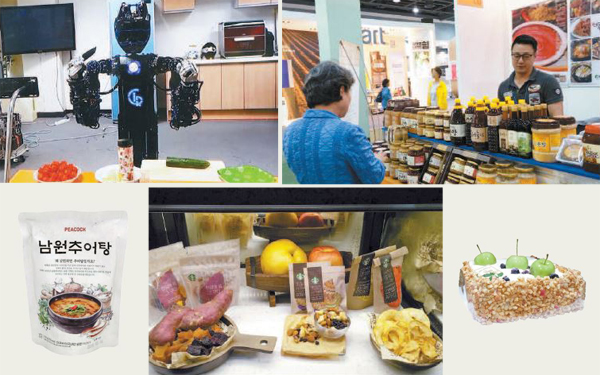 Clockwise from the left: CIROS-2, a cooking-assistant robot; fermented foods such as soybean sauce on display;Peacock chueo-tang (mudfish soup) from E-Mart; dried vegetables and grains at Starbucks; a Paris Baquette apple cake made with apples produced in Yeongcheon. By Lee So-ah

Although Koreans are accustomed to fermented food, it is the latest trend for global consumers, following reports and perceptions that it can be a key to longevity. In 2006, U.S. magazine “Health” picked Korea’s kimchi as one of five healthy foods it recommended. An association of international chefs also selected fermented food as a promising trend for 2015.

The Korean food industry has presented a variety of fermented foods. One example, “My-san Fermented Brown Rice,” is a health food that helps the body absorb 24 kinds of various grains and is not easily hardened, even if it is left at room temperature for three or four hours.

Rising popularity for fermented food has also shed a light on traditional food. Gweon Gi-ok, the country’s No. 37 traditional food master, showed a variety of traditional fermented dishes, such as omegi-ddeok (rice cake), made of adzuki beans produced on Jeju Island.

Alcohol is a popular fermented food. Doranwon, a traditional Korean wine maker, received the best award at the Korean Wine Festival last year, with its unique alcohol made of grapes grown in Gangwon province and fermented in bamboo.

Previously, the strategy was the one-way help of conglomerate to SMEs. But now, win-win means a genuine cooperation of both sides.

Starbucks was awarded the best prize at the event in terms of “win-win cooperation,” for using Korean-made agricultural products.

Starting in 2009, Starbucks used Korean rice to produce a variety of snacks such as rice chips, black bean rice bars.

SPC Group, which runs the nation’s popular Paris Baguette chains, also signed contracts with 16 local governments to directly purchase a total of 14 vegetables and fruits produced in the region. The bakery is also praised for its purchase of Korean wheat, consuming 130,000 tons annually.

Nongshim, a leading ramen maker in Korea, is also exporting potato chip snack, called “Sumichip” to roughly 20 countries worldwide, by purchasing a rare kind of potato dubbed the “sumi potato” that is hard to manufacture due to its high moisture content. Roughly 670 potato farms are cooperating with Nonghim and the deal with such a large food maker gives stable incomes to local farms.

Using Korean vegetables, Lotte Mart is expanding its overseas customers. The chain has purchased about 10 tons of onions, whose prices crashed last year due to a glut, and exported them to China. This year, they exported Korean mushrooms, which were sold out within two weeks.

“We are planning to export about 500 tons of Korean vegetables to Vietnam,” said a manager of the Lotte Mart. “First, we tried to help local farms in the country but now their products have become an important resource for us to expand our overseas market.”