NPAD reaffirms faith in chairman in the face of party divides

NPAD reaffirms faith in chairman in the face of party divides 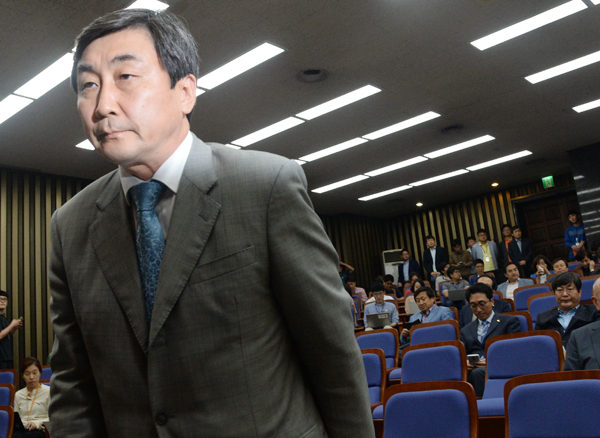 The New Politics Alliance for Democracy (NPAD) decided on Sunday to continue its support for party Chairman Moon Jae-in, amid growing internal strife that had pushed the opposition leader to call for a vote of confidence and raised the prospect of a split.

With the decision, Moon withdrew his plan to put his leadership to a vote, a move he demanded following mounting disgruntlement among lawmakers with his leadership style.

During a meeting attended by 80 lawmakers and 12 executive party members at the National Assembly, the NPAD agreed to continue its backing of Moon and halt discussions among Moon’s dissenters calling for his resignation.

“The party [from now on] will exclude divisive controversies over the party chief’s position. The party also calls on the party leader to do his best for the unity of the party and actively engage in communication with fellow party lawmakers who have different views from his,” the NPAD said in a statement after the meeting.

With the decision, the chairman is expected to accelerate his efforts to unite internal party factions and implement nomination proposals that will dramatically change the way the NPAD selects candidates for the upcoming general elections in April.

Moon’s endorsement likely means that direct complaints focused on the chairman’s leadership could soften to some degree, though it still leaves open the possibility for dissent, particularly in light of the fact that many of Moon’s critics boycotted the meeting on Sunday.

“If Moon shows us a clear vision for victory in the general elections, then I will give him my support,” said Rep. Moon Byung-ho, who stands outside Moon’s loyalist circle. “But if he does not, I have no choice but to continue my demand that he resign from his post.”

Yet the agreement could buy some time for Moon to carry out the reforms that he said would raise the chances for victory at the polls and find new blood to enter the political realm.

It remains unclear, however, whether he will be able to carry the momentum from Sunday’s meeting all the way through to the general elections.

While Moon was able to maintain his post without a vote of confidence, Rep. Ahn Cheol-soo, Moon’s one-time rival in the opposition’s presidential primary, called for tougher party rules for party members convicted of corruption, saying its current stance on graft falls far short of public demand.

He also did not shy away from criticizing Moon’s leadership, and followed up that stance by citing a previous case against opposition Rep. Han Myeong-sook, who was found guilty of taking bribes during her time serving as prime minister and sentenced to a two-year prison term.

Moon criticized the verdict against Han as a political move made by the court to appease the government, an argument Ahn condemned Sunday.

“The party’s protests over the Supreme Court ruling have no justification in the eyes of the public,” Ahn said. “It is not the position that a political party that advocates democratic values should embrace.”

Further complicating Moon’s efforts to bring together internal factions, Rep. Chun Jung-bae declared on Sunday that he would create a new opposition party come January, adding that the NPAD had no hope of realizing public demands.