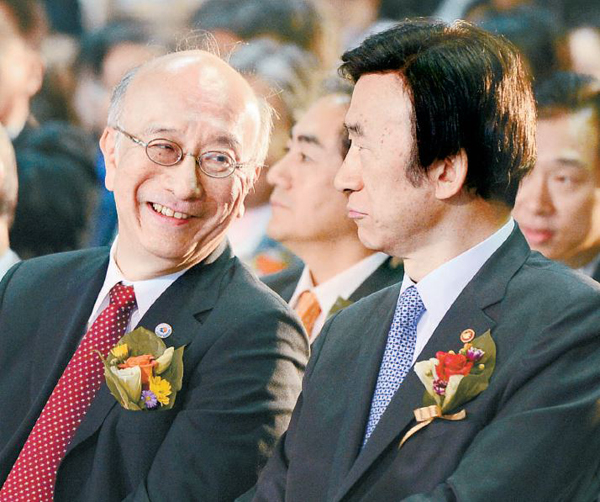 Japanese Ambassador to Korea Koro Bessho, left, talks with Minister of Foreign Affairs Yun Byung-se during the opening ceremony of the Korea-Japan Festival 2015 in Seoul, held on Sunday at COEX in Samseong-dong. [NEWSIS]

In a prompt response on Saturday to contentious Japanese defense legislation that authorized overseas military combat missions, Seoul stressed that it “will not tolerate” Japan’s practice of collective self-defense on the Korean Peninsula without its prior consent.

“The [Korean] government points out the Guidelines for Japan-U.S. Defense Cooperation, which clearly stipulates that the practice of collective self-defense shall be based on the absolute respect of that third country’s sovereignty,” the Korean Ministry of Foreign Affairs said in a press release.

“[Japan] will need to transparently implement the security bill in a way that adheres to the spirit of the pacifist constitution,” the statement read, adding that any military action concerning South Korea’s security or its national interests should be preconditioned on the country’s consent or formal request.

The pacifist constitution, written by the United States, refers to Article 9 of the 1947 Japanese Constitution, which spells out that the Japanese people “forever renounce war as a sovereign right of the nation and the threat or use of force as a means of settling international disputes.”

Washington and Tokyo jointly announced the updated version of the Guidelines for Japan-U.S. Defense Cooperation during Japanese Prime Minister Shinzo Abe’s weeklong visit to the United States in late April, which took into consideration the island country’s revised defense stance to participate in collective self-defense overseas.

Seoul did not express brazen regret over Japan’s recent passage of the 11 bills - one concerning international peacekeeping and 10 others related to collective self-defense measures - which for the first time since the end of World War II offers legal grounds for Japan to defend allies under attack overseas.

According to The Associated Press, Abe told reporters after the passage of the bills in the early morning hours on Saturday that “the legislation is necessary in order to protect the people’s lives and their peaceful livelihood, and it is to prevent a war.”

But at a time when the country has yet to formally apologize for its wartime atrocities, critics here doubt that Tokyo’s security bills are solely geared towards the common goal of stabilizing peace in Northeast Asia.

“The truth is that Japan has consistently maintained a doubtful stance on historical issues, including wartime sexual slavery, and unnecessarily brought up territorial disputes,” Park Young-june, a professor at Korea National Defense University, wrote in an article contributed to the JoongAng Sunday, an affiliate of the Korea JoongAng Daily.

“If Japan sincerely wants to return to a ‘normal state’ like Germany and Italy have in the 21st century, it must show efforts to ease distrust held by neighboring allies stemming from historical and territorial feuds.”

A “normal state” refers to a country capable of waging war against other countries.

The historical disputes between Korea and Japan vary drastically, from the tens of thousands of young women and girls forced by the Imperial Japanese Army into military brothels during World War II, to territorial claims over the Dokdo islets, which Korea administers but Japan claims.

President Park Geun-hye has long stated she will not hold a summit with Abe unless he shows a sincere attitude toward dealing with the “comfort women” issue, as the victims are euphemistically referred.

Tokyo is also locking horns with Beijing over a set of islands in the East China Sea known as Senkaku in Japanese and Diaoyu in Chinese.

In a welcoming speech at Sunday’s opening ceremony of the Korea-Japan Festival 2015 in Seoul, Korean Foreign Affairs Minister Yun Byung-se avoided any direct reference to the security bills, but said that “Korea-Japan relations are still affected” by issues that “root back to the unfortunate past” of modern history.

Stating that every country in this world has some kind of a dispute with neighboring areas, Yun highlighted the essence of “building trust” in order to “wisely overcome” those chasms.

Japanese Ambassador to Korea Koro Bessho, who sat beside Yun during the opening ceremony, was present during Yun’s speech.

Pyongyang, on the other hand, excoriated the security bills through its state-run Korean Central News Agency (KCNA) on Saturday, calling it an “evil law” that will pave the way for Japan to invade other countries.

Reading out a statement issued by the spokesperson of North Korea’s Ministry of Foreign Affairs, the KCNA continued that Tokyo was “off on the road leading to militarization and re-invasion.”

In response to that “scheme,” Pyongyang added that it would reinforce its capabilities to deter war and that Tokyo would “everlastingly regret” passing the bills.